, the alternative would be that almost every sector would have a differerent QNH, you would be constantly changing levels trying to keep up with it

The Americans seem to be able to cope with it – they’ve had flight levels start at FL180 for decades at this point.

[name removed on CAA request] is indeed an active light GA flyer, we are in an AA5 group together and he flies a lot. I’m not putting any other personal info’ about him on a forum.

Since he is obviously not flying with a chart from 1999, the mystery deepens as to who composed and is responsible for that question bank.

Someone evidently quite close to him has posted this on one UK site:

As for CAP1404 and the Airspace Infringement Awareness Course […]; it is a great course, well constructed and highly relevant to teaching to prevent and delivered in a professional manner. The industry will continue to educate and assist; good comms and roll out of more FMCs in the near future will hopefully help more pilots. This, with electronic conspicuity and more pilots using airspace warning tools, coupled with better airmanship hopefully will see fewer pilots infringing.
I cannot start to name the many great people from across the industry from GA Pilots, through air traffic controllers, regulators to commercial operators who are trying their hardest to help us, yes US (mainly GA , but not only GA pilots) from infringing. Yes I am a biased but the new iteration of CAP1404 is the best to date and the process contained therein in fair, Just and relevant.

As a piece of trivia, I did a trace on the Special Delivery letter sent to [name removed on CAA request] about the bogus question(s), in June (phone calls and emails all went awol). It shows as never delivered! Usually this means the postman delivered it but forgot to get the signature. So I will get my £7 back


[name removed on CAA request] is indeed an active light GA flyer, we are in an AA5 group together and he flies a lot. I’m not putting any other personal info’ about him on a forum.

In that case why is the question bank in the state it is, with questions relating to charts that are no longer published? It could be a simple oversight (such as the question writer writing the question as he/she remembers things being charted, rather than looking at the latest edition of a CAA VFR chart), but these things need to be corrected.

I would also agree with Peter that the question about airspace depicted as a flight level is nonsense, and the CAA should be encouraging people operating near such airspace to be using 1013mb rather than the regional QNH. Surely an active GA flyer can see how this makes sense, and would help avoid future infringements?

Someone built a nice little tutorial and it was implemented. They needed a test, so they just grabbed some questions from the PPL exams – which are, as you demonstrate, very old and often somewhat flawed. To have built a new test from scratch would have (a) taken time and resources, and (b) implicitly admitted that the PPL exams on the subject weren’t up to scratch.

[name removed on CAA request] response (or lack thereof) is probably because to investigate the issue properly would mean he’d have to:

(a) learn an awful lot about the way something is done/managed, something that someone under him is paid to look after;
(b) discipline someone for not doing their job properly;
(c) oversee an overhaul of not only that tutorial/test, but of the PPL exams.

None of the above are likely to be things he wants to do.

I would believe that Graham if it wasn’t for the (probably) hundreds of people doing that process (especially the bogus online test) every year, and really nobody making a complaint? Obviously I think many people go through the process and just get it done and keep their mouth shut. One FI I spoke to recently said he does this (the 3rd option) all the time. Reportedly there are about 1000 CAS bust actions a year in the UK.

According to the video at https://airspacesafety.com/facts-stats-and-incidents only 44% of pilots pass the test associated with the infringement tutorial. 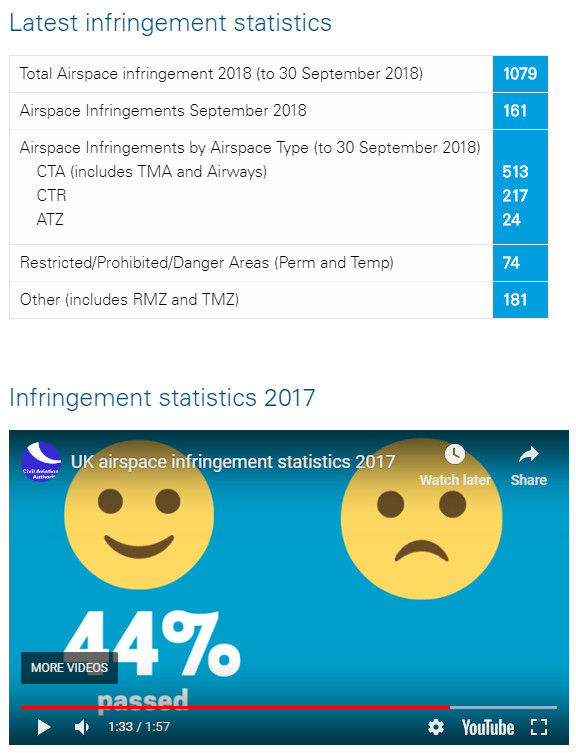 They are pretending that their priority is on education. Well, it may be, but they are doing it very badly with this “maximum foul taste in the mouth” approach.

In half the time it took somebody to produce that slick video, they could have put some relevant and correct questions into the QB. Anybody who actually flies a plane will spot the duff ones immediately.

Peter
Administrator
Shoreham EGKA, United Kingdom
68 Posts
This thread is locked. This means you can't add a response.
Sign in to add your message