This must be very rare in certified aircraft but it does make one wonder how it is possible. It could be loose bolts, or spar corrosion not picked up in (negligent) Annuals. 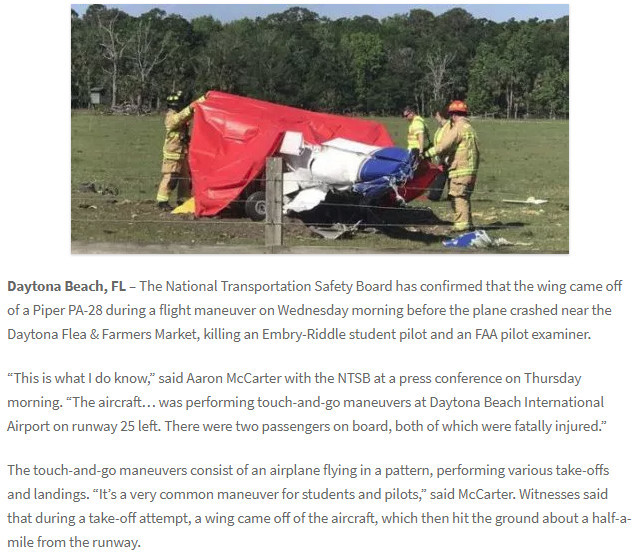 ‘Busy’ PA-28s can suffer from cracks in the walkway doubler that is underneath the starboard wing skin where the walkway is – all that doubler does is beef up the walkway where everyone, er, walks…

The walkway doubler has, for want of a better word, flutes in it to provide added strength for the foot traffic (nothing to do with flight loads). The flutes are effectively the same (but bigger) as those found in the ailerons, flaps, horizontal stab and rudder skins. If the double cracks, it is normally at the rounded ends of the flutes.

The port wing is the same as the starboard without the walkway doubler skin.

Not sure they ‘often develop cracks at the starboard wing root’.

The examiner lost here was very well known as a major player in in-aircraft type ratings for light jets.

Bit sobering as my son has flown in those ER aircraft. As an aviation college, the maintenance they get is pretty comprehensive. Wil be interesting see what caused this.

No, I wasn’t refering to the walkway doublers. Two aircraft i know closer developed cracks in the root (》30000 landings on grass though). I think that qualifies as "often on high time training aircraft ;-)

Easily detected at the annuals and repairable, so no bigger problem.

So where exactly in the ‘root’ – main spar, rear spar or forward attachment?

Not convinced that knowledge of two cracking ‘incidents’ equates to ‘often’ given the number of PA-28s flying. It maybe that I don’t do scaremongering….

If the newpaper article is to be believed, it was not even a high-G situation. Strange.

One previous thread here. Another partly relevant. It could have been an impact with something, on a preceeding flight. Undeclared, or declared and incompetently inspected.

OTOH, with metal structures it is hard to do the required damage without it being obvious in the condition of the skin – one example.

As a PA-28 owner this is of interest. I don’t know if it’s referred to in the other threads, but I’ve always felt that the AAIB’s commentary on the Thruxton crash Thruxton (Passenger behaviour, maybe camera strap caught on controls causing excessive control reversals) was a little ‘last resort’. It’s quite hard to apply excessive control forces in a PA-28 at normal speeds.


So where exactly in the ‘root’ – main spar, rear spar or forward attachment?

Not convinced that knowledge of two cracking ‘incidents’ equates to ‘often’ given the number of PA-28s flying. It maybe that I don’t do scaremongering….

Year. Piper issued SB886 just for scaremongering. I am very sure, you’re right.

mh
Inside the sky.
EDXE, EDXF, Germany
97 Posts
This thread is locked. This means you can't add a response.
Sign in to add your message