Poor people, nothing they could have done. Structural failure is my main fear.

There’s an interesting thread in beechtalk about that. It seems there’s an AD out since the 80ies to inspect the main as well as the front and aft wing spars for fatigue every 10k hours. The front and aft spars have only 1 bolt to fasten and they can get tired or sheared off over time, and it gets worse if the wing hits something on the ground or a bird strikes it in flight.

When that happens, the wing more or less relies on the main spar holding it to the fuselage and each time flaps and ailerons are moved the wings are twisted, which, over time, can lead to shearing off of the bolts, or to fatigue in the main spar.

Seems to be a special problem of the PA28 and PA32 series wing spar construction and training aircraft are more susceptible to that problem.

I wouldn’t buy a used PA28 without inspecting whether the front and aft wing spar bolts are actually screwed in, and whether the main spar doesn’t show fatigue or microscopic ruptures. Which means the wings have to come off.


I wouldn’t buy a used PA28 without inspecting whether the front and aft wing spar bolts are actually screwed in, and whether the main spar doesn’t show fatigue or microscopic ruptures.

Is there a new (emergency) AD yet? I’m not sure I’d actually want to even get in a PA28 at all now….especially a high time flight school one…unless it been recently inspected…

it’s an old AD but valid.

The proposed new AD out for consultation quantifies the cost of cutting a second inspection panel so there is a panel each side of the main spar. On some Pipers like my PA28-181 the inspection panels already exist. There is no mention in the AD of needing to remove wings to check for cracking and it will obviously just be an inspection process.

This weekend I’ll have a good look with a mirror and the Borescope.

At the Annuals we look for corrosion and any obvious damage. This time I propose to spend a long time checking the main spar really close in to ensure all is totally smooth and no hairline cracks of any sort. Can anybody come up with any hints and tips. Perhaps I should use a Dye Crack Penetrant spray?

Regarding checking the torque, I read an interesting article the other day (can’t find it now but I think I have a printout somewhere) about why you should not re-torque bolts (to the full specified torque) over and over. Apparently it results in an ever increasing torque and eventual failure. It may have however been specific to the topic in question there which was this type of hydraulic hose fitting

whereas the leeway on the wing attachment bolt should be a lot more.

Then there is the business of dry v. wet torque which definitely does apply, and this has caused engine through-bolts to snap.

Yes you can get dye pen as an aerosol spray. Fairly easy to use and should show up really obvious cracks.

I have read the same about torque but to be honest there are 5 bolts and I probably won’t even check them with any tool. It is fatigue cracks that I’m thinking about when there is nothing much to do over the English channel at 50 degrees North!

I can’t see how SB1304 actually deals with the issue of looking where the wing root bolts on to the fuselage. The SB details how to install another inspection panel so there is one each side of the main spar. My PA28-181 is not on the SB1304 list as it already has inspection panels both sides of the spar, this allows you to see (in my case) nice perfectly painted metal on the main spar but there is a rib right in the way which stops you looking at the critical area which I have highlighted in yellow above. If you want to inspect the wing root it seems the only way to to use a borescope where you can see most of what you need from removing the long thin panel at the bottom of the wing root.

You will need a borescope with a flexible end which can turn 180 degrees and look back on itself. It takes ages to ensure you are looking at the correct areas and to understand the manual/drawings. The first side took me an hour to inspect, the second about 45 minutes. You can also put the borescope right in the wing and pass it through a hole in the rib……..photo directly below. The last photo shows one of the 50 photos I took of each side showing the critical area.

I am pleased to report that all is perfect on my Aircraft so I can go back to worrying about other things now! 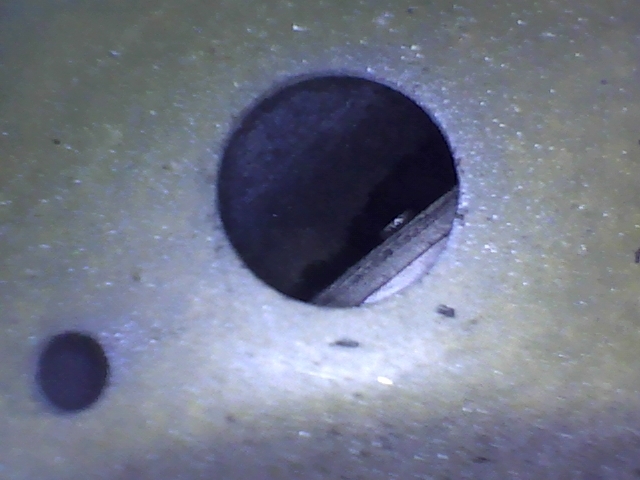 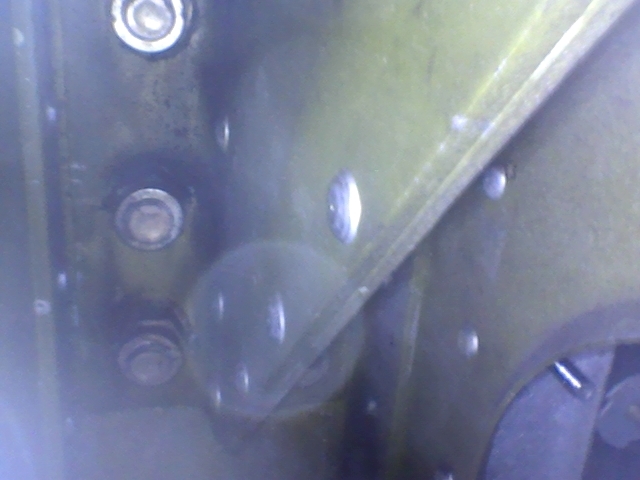 See below ……….this is not good. The fatigue cracks have been found on some other Pipers and the crack of 0.04 inch is just over 1mm. My inspection above wouldt not have spotted the issue if under the bolt head.

Does anybody know how a bolt-hole eddy current inspection probe works?…………….See below

WASHINGTON (May 15, 2018) — The National Transportation Safety Board issued Tuesday an investigative update on its investigation of the April 4, 2018, crash of a Piper PA-28R-201 near Daytona Beach, Florida.

Two people suffered fatal injuries following an in-flight separation of the airplane’s left wing shortly after takeoff. The airplane subsequently collided with terrain and was destroyed. The airplane was registered to and operated by Embry-Riddle Aeronautical University as an instructional flight under the provisions of Title 14, Code of Federal Regulations, Part 91.
The preliminary report for this accident was published April 16. Parties to this investigation include the FAA, Piper Aircraft and Embry-Riddle Aeronautical University.

Initial examination of the left wing main spar at the NTSB Materials Laboratory revealed more than 80 percent of the lower spar cap and portions of the forward and aft spar web doublers exhibited fracture features consistent with metal fatigue. The fatigue features originated at or near the outboard forward wing spar attachment bolt hole.

None of the surfaces exhibited visible evidence of corrosion or other preexisting damage. The right wing also exhibited fatigue cracks in the lower spar cap at the same hole location extending up to 0.047-inch deep. The remainder of the lower spar cap, spar web doublers, and upper spar cap displayed fracture features consistent with overstress.

The structures group of the NTSB’s investigation conducted an inspection of another Piper PA-28R-201 April 18 and 19. The plane inspected had a similar number of total airframe hours and cycles and was used exclusively for flight training of students. That inspection revealed a crack indication at the left lower outboard forward wing spar attachment bolt hole. The crack measured about 0.040-inch long and deep. The airplane’s wings were subsequently reinstalled and examined using new inspection procedures developed by Piper Aircraft. A bolt-hole eddy current inspection probe was used to confirm the location and size of the previously identified crack.

Nine additional PA-28R-201 airplanes have been inspected using ECI techniques under NTSB supervision. No crack indications were detected in these nine inspections.

The NTSB investigative team is examining corrective actions taken in response to the March 30, 1987, Piper PA-28-181 in-flight wing separation which resulted in three recommendations to the FAA and a subsequent Airworthiness Directive, which has since been rescinded.

The NTSB’s investigation of this crash is ongoing and as such, no conclusions about probable cause should be drawn from this investigative update or the preliminary report. Additional information will be provided as warranted.

It strikes me that all of the fatigue cracks start at the lower outboard bolt holes.

To put this in perspective, this is incredibly rare for a huge fleet of Aircraft. I can think of the PA-181 wing spar failure doing " low level" work and then the failure/NTSB investigation above. Perhaps 2 failures in 50++ years of flying, and there are 35,000 Pipers out there.

An AD could take months to come out and nothing will get inspected until the next Annual at the earliest. Also no doubt the “bolt-hole eddy probe” won’t actually be sitting in the corner of every engineer’s workshop.

Does anybody know how difficult it is to remove just the two outboard bottom bolts? I would be fairly sure that the boroscope could then spot any cracks if as long as 1.6mm? It could be a case of doing a simple DIY inspection until more information comes out.

I think it would certainly put my mind at rest!

Archer-181
United Kingdom
97 Posts
This thread is locked. This means you can't add a response.
Sign in to add your message