It is also a moot point given the aircraft is not currently flyable.

Well, it is not a moot point. For at least 2 reasons:
1. As stated before Jesse prevented Pilot from accessing his own aircraft for engine maintenance. We are talking ‘Engine Preservation for Active and Stored Aircraft’ or Lycoming SL L 180. The legal justification was the same: you can’t get it out of our hangar because you didn’t pay for labor. And you can’t do the maintenance inside because we are EASA PART 145 company and you can’t do any work here.
2. Any aircraft can be disassembled and towed away.

Pay your bill, pull your plane out and take the shop to court if you think there’s any wrong doing.

Whining here will solve nothing. Actually it just makes for more bad feelings & animosity between the parties involved.

BTW: why do you hide behind a [new] BS pseudo and base ?

If you fly the aircraft in and can’t fly it out regardless paying or not then there’s definitely something wrong. When I upgraded my DA42 with CD-155 engines, all STC paperwork was presented, I saw two completed conversions and only then I was asked to pay upfront but only for engines. On top of that I got discount promised two years ago if I was early adopter. The work was estimated to 5-6 weeks, it took 9 and I received additional discount. And I paid the rest of the bill (all material needed for conversion, new exhausts, new propellers and all services) few days after I flew the aircraft from the shop. That’s the appropriate service. The one you’re describing is total crap.

Pay your bill, pull your plane out and take the shop to court if you think there’s any wrong doing

I don’t know if this thread is the best way to achieve an equitable solution, although no doubt it may have some psychological benefit.

On the ‘sue them’ principle, the cost of litigation is eye watering, just getting to the stage of a protocol letter, or its Dutch equivalent, would be another five figure investment, let alone the six figure cost of going to court!


Whining here will solve nothing

Dear Michael, 3 days ago you stated that I make totally false accusations 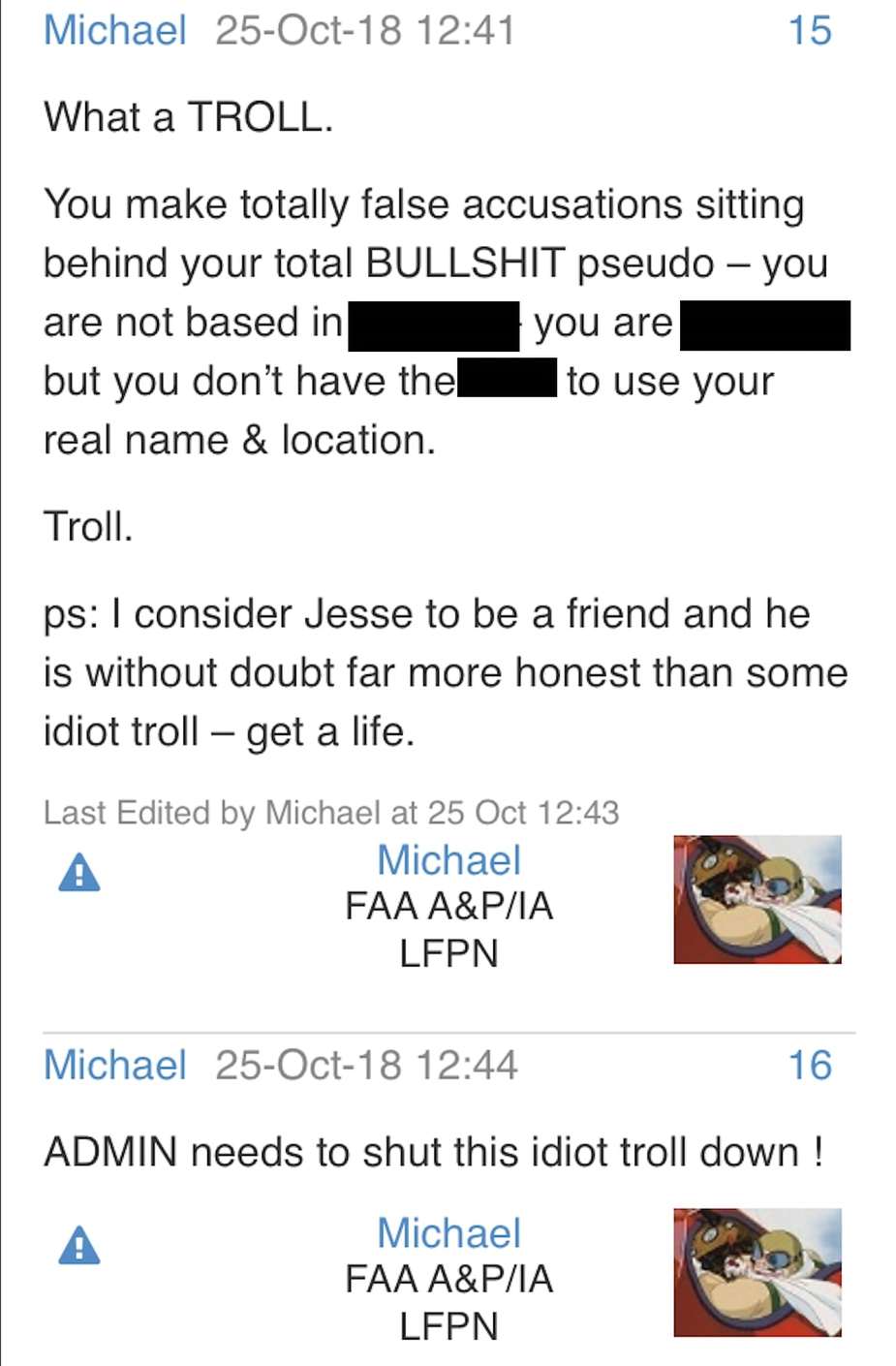 would you be kind enough to publish here any evidence to support your statement
For your convenience, here are my bullet points:
https://www.euroga.org/forums/hangar-talk/9988-how-to-lose-your-plane-and-35-000-euro/post/193863#193863

I fear this thread needs the input of a kind commercial Dutch lawyer who might advise the OP whether there is a pragmatic solution in Holland, some form of commercial arbitration. As mentioned earlier litigation is above the pay grade of the typical GA owner.

Holding aircraft to ransom is not unusual, and there may be reasons for the practice, hence the need to stick with engineers where there is a mutually respectful commercial history. These engineers in turn are usually able to recommend avionics engineers with whom they have had a good experience in the past.

The affected aircraft in this case must be using up hangar space and presumably is an opportunity cost for a well run avionics shop.

This is the continuation of the previous story on the modernization of avionics posted here:
https://www.euroga.org/forums/hangar-talk/9988-how-to-lose-your-plane-and-35-000-euro/post/193710#193710
This time I would like to tell you about how the manufacturer of avionics pocketed $ 20 000 for the equipment which can not be installed, refused to return the money and proposed an agreement which has not fulfilled.
And by the way, the customer never got the equipment he paid $ 20 000 for

In March 2018, the Robin has been sitting in the Vliegwerk hangar at EHMZ for over 7 months.
Initially, Apsen Avionics claimed that they have nothing to do with the STC for Robin aircraft.
Aspen CEO in the official letter to the owner of the aircraft and buyer of Aspen devices confirmed that the STC is being developed by another entity and that Aspen will not own this STC.
At that time, the plane still had a valid ARC. The owner theoretically could fly the aircraft home.
When it came to light that Jesse had deceived the owner, he made the decision to interrupt the project and take the plane.
At this time Aspen proposed a settlement: a promise to pay $ 6000 for leaving the plane to complete the work on the STC. The owner approved these proposals: 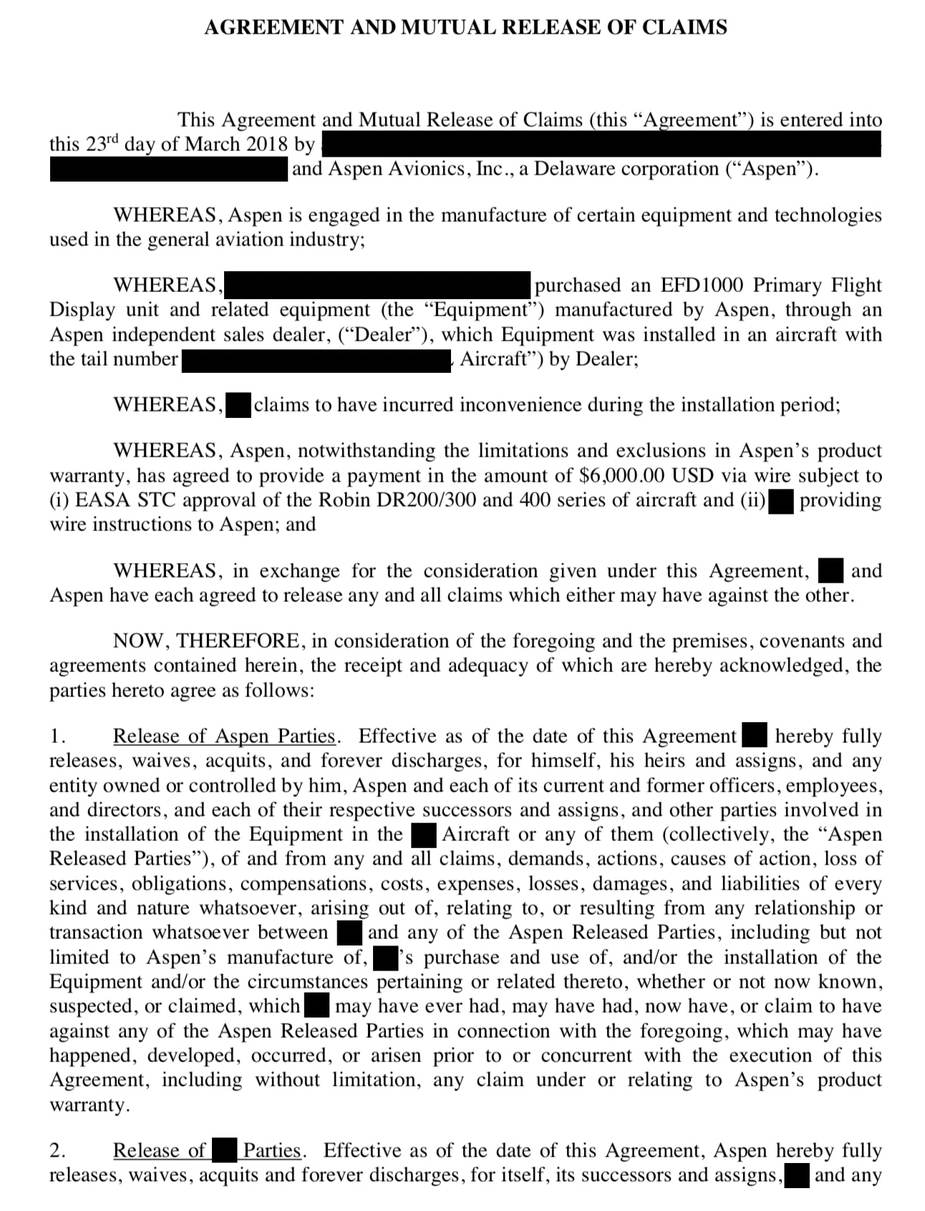 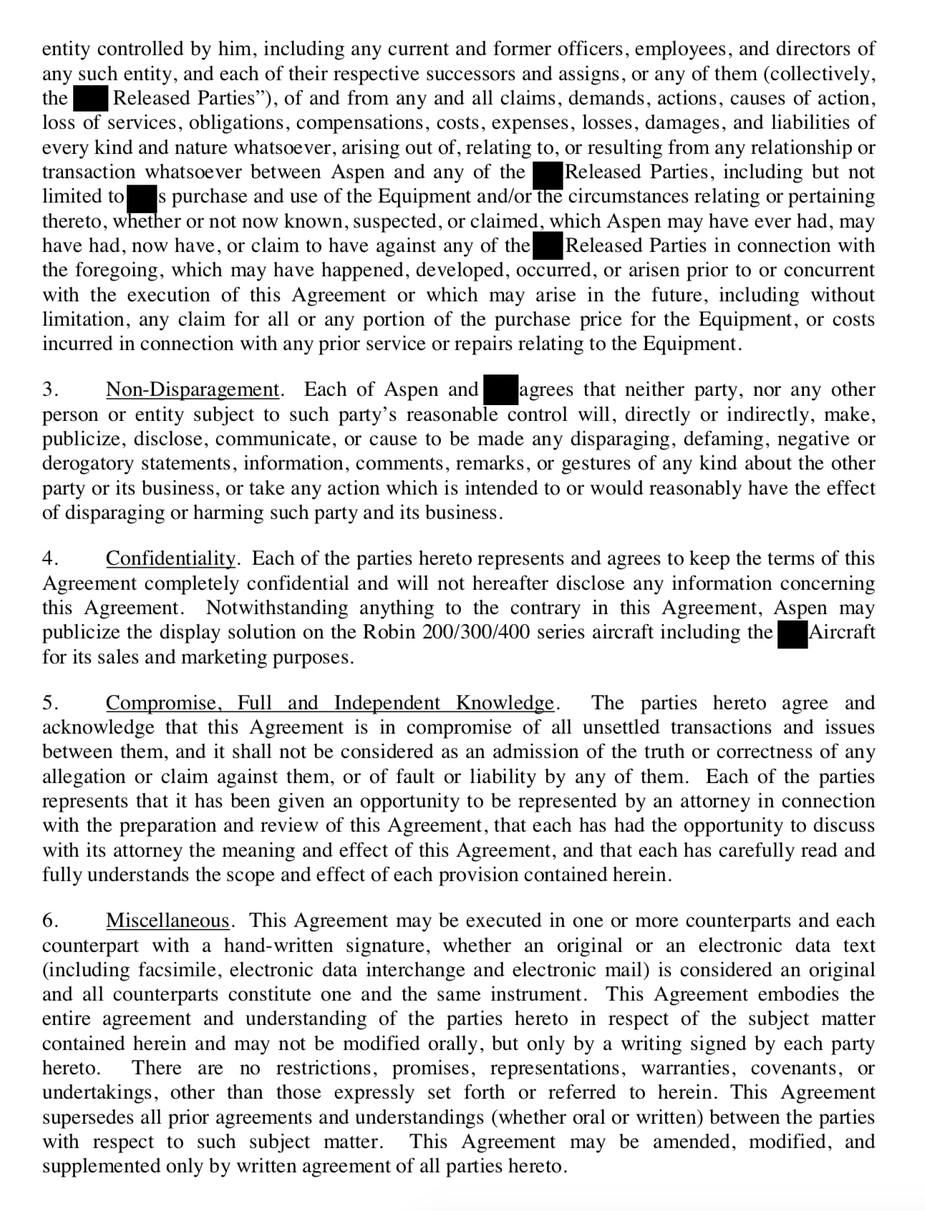 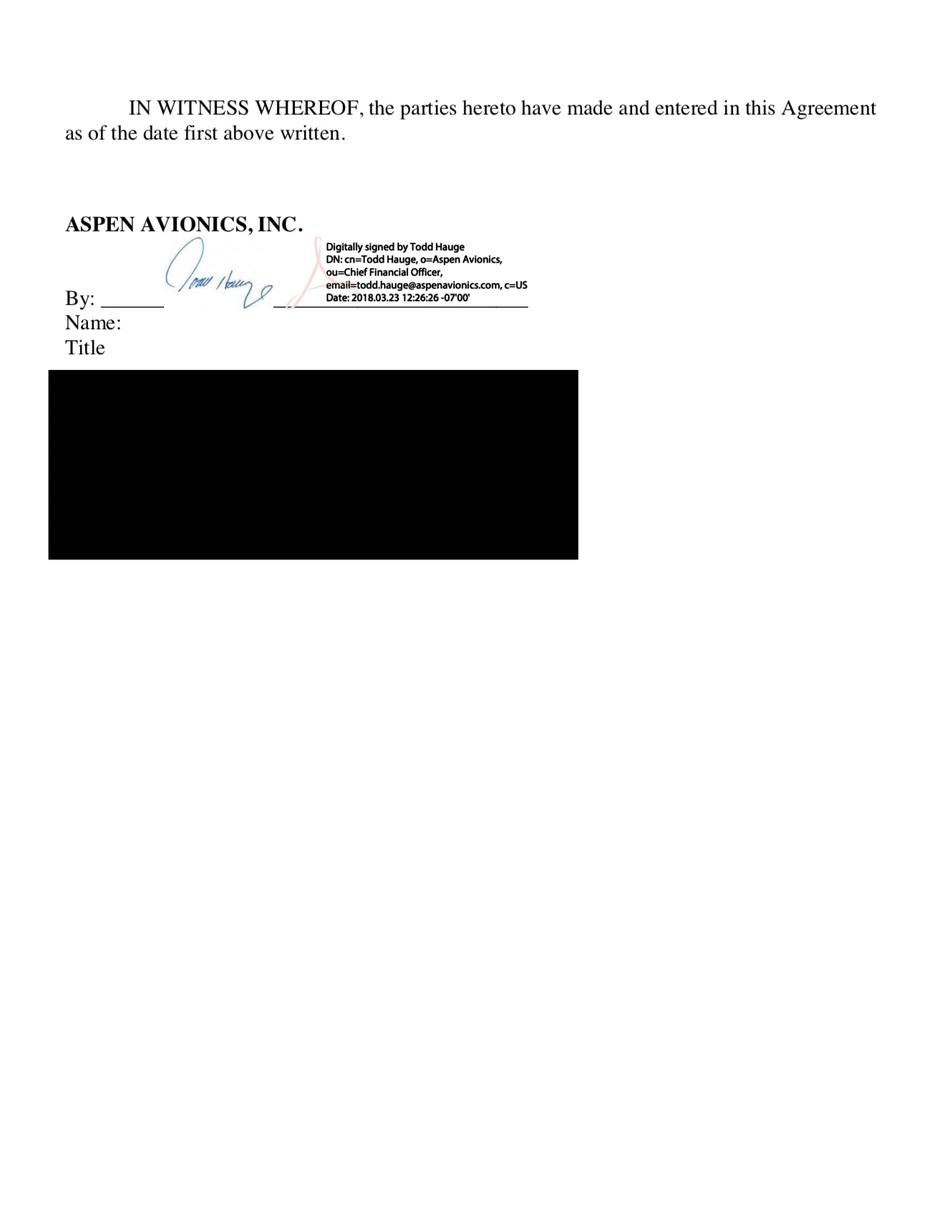 Important remark: the settlement says that the avionics was installed. The owner of the aircraft could not verify what the status was.
A few weeks later it turned out that the installation looks like this:
https://www.euroga.org/system/1/user_files/files/000/035/881/35881/9396a4c0d/large/3.jpg
Time passed, work progress was not.
In April, the owner of the aircraft asked the chief of international sales at Aspen to agree to perform the installation of avionics at any other Aspen delier in Europe. The owner declared that at his own expense he would transport the aircraft to any other dealer indicated by Aspen.
Aspen decided that the installation is to continue with Jesse.
On 17 May 2018, after 9 months spent in Vliegwerk hangar the aircraft’s airworthiness certificate expired. The Robin was stuck at EHMZ.
The owner of the aircraft learned that work on the STC for Robin was stopped.
On July the 2nd the chief of international sales at Aspen send to his customer the following message:

The owner of the aircraft wrote to the signatory of the agreement, Chief Financial Officer Aspen that he wants to return avionics and asks for a refund. Here’s what the CFO answered on July the 11th:

“You received a discount from Aspens authorized dealer, Vliegwerk Holland, B.V. on equipment manufactured by Aspen”

“The documentation work for the STC has been completed for some time though your Robin airplane has not been available for the required flight test.”

9 days earlier, the chief of international sales at Aspen stated that they are working on AML for EASA aircraft, not any more on STC for Robin DR200/300/400. Now the CFO claims that the STC documentation has been ready for some time. Just for clarification, the installer chosen by Aspen possessed the aircraft in airworthy condition for 9 months and 7 days.

The documents show that it was the last mail sent by Aspen to the aircraft owner.
Aspen CFO did not respond to the customer on his subsequent emails. Aspen did not refund money for avionics which can not be installed.
Aspen customer has never got the avionics he paid for.

WoW looks like the whole aircraft community is ganging up on you !

Maybe you should take up golf ?

Seriously, you obviously are leaving out " the other side of the story" …

PS: When are you going to come out of the closet and use your real name rather than continue on as a troll ?


At any rate, I’ve spoke with Jesse about this and I AM 100% SURE THAT HE HAS CONDUCTED HIS BUSINESS WITH THE UTMOST INTEGRITY .

I’ve been following this topic from time to time and without taking sides I have to note that from one side some documents, facts, and data have been presented while from the other side I could only read “friend and professional” which by itself is not an argument. Even if someone is great professional and have done all his work great, there’s possibility that he made a mistake in this particular case. And the mistake doesn’t necessary have to be his own one, he could be misled by equipment manufacturer’s statements and non-fulfilled promised on equipment availability.

Emir
LDZA LDVA, Croatia
105 Posts
This thread is locked. This means you can't add a response.
Sign in to add your message