FYI: We first planned a route to southern France, but we decided to deviate to Croatia because we are VFR only and the weather in France didn’t seem to be flyable. So I checked the weather a few days prior to Good Friday, and I was overwhelmed: No cloud on the sky on my whole route from Gruibingen EDSO to Losinj LDLO! The only thing was, that I am a little afraid of flying in the Alps, since they are a “real” mountain range, compared to our Swabian Alb at my homebase. 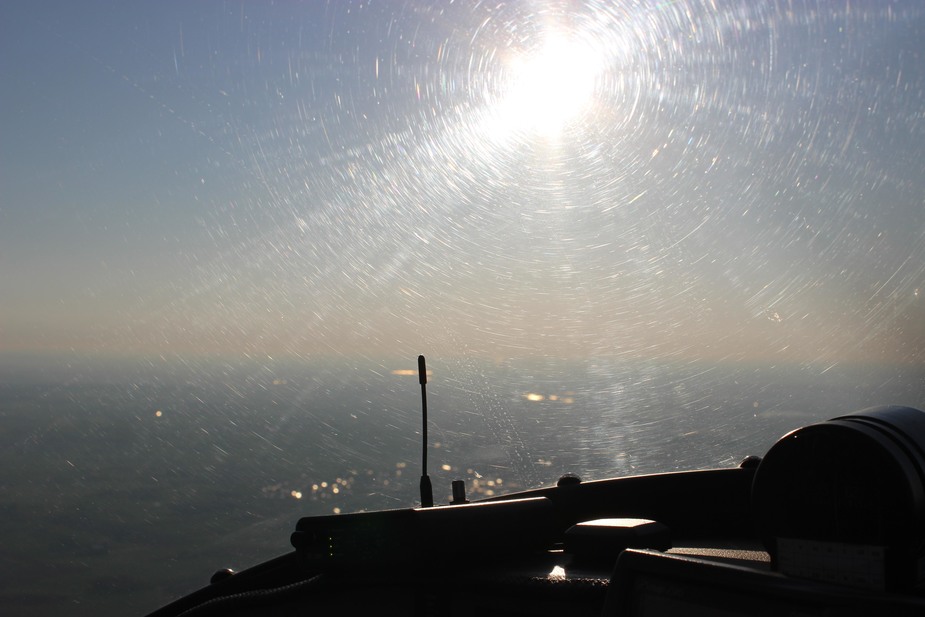 But nevertheless, I really had to take advantage of this great weather. So we filed our flightplan on Holy Thursday’s evening for the next day, planning our take-off at 7 o’clock local time. 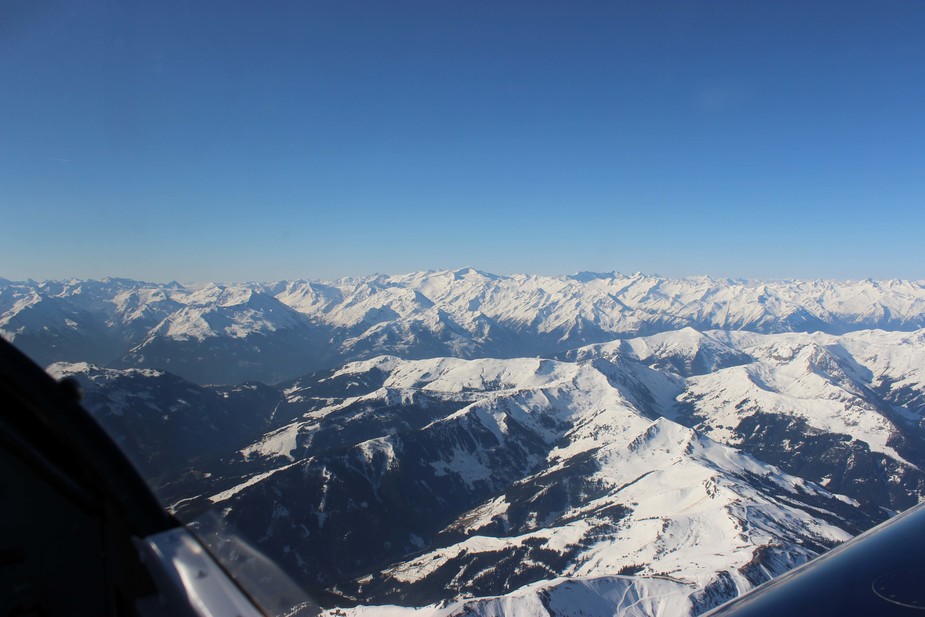 This nearly worked perfectly and so we took off – after fuelling up – at 7:15 o’clock local. The first two hours were nearly boring, since we had the calmest air imagineable and the only thing changing in the landscape were the Alps, that came nearer and nearer to our right. 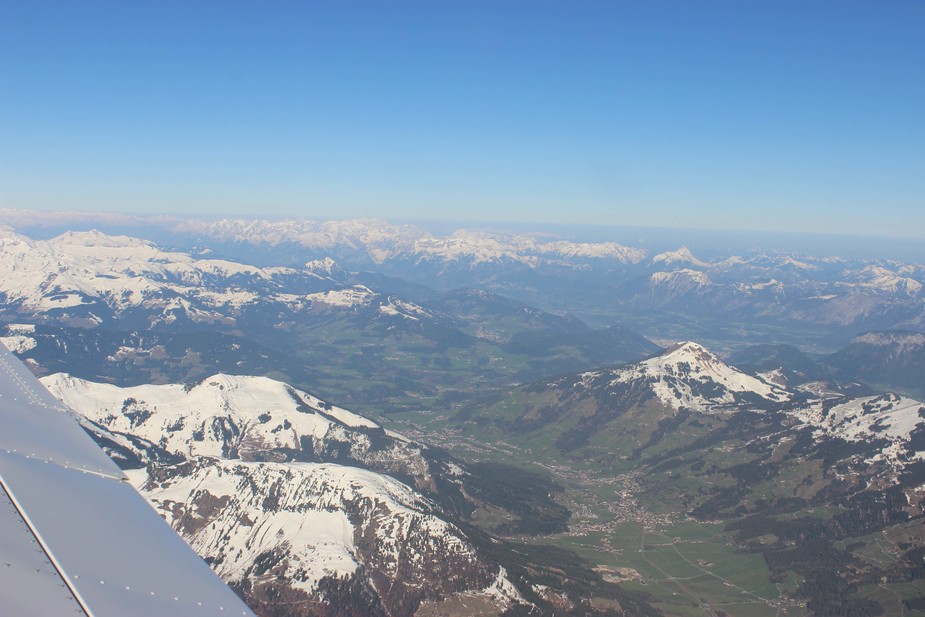 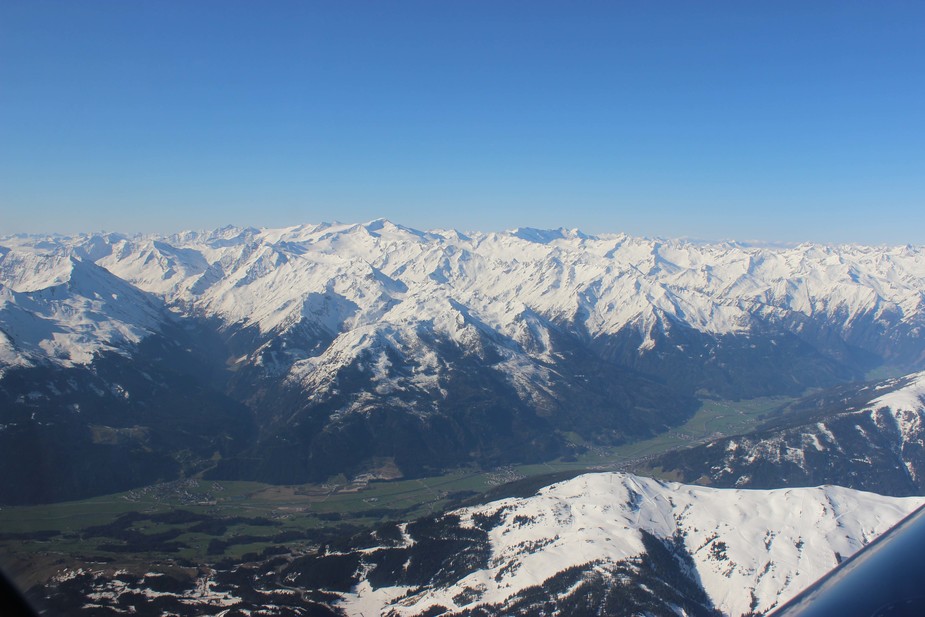 After about two hours, we entered the Alps at Kufstein. Since I planned a bad-weather-route, following the bigger valleys of the Inn and Salzach river, I was so happy to have not a single cloud around here: Clear views of about 200 km (we were able to see the Mont Blanc from Kufstein!). This allowed us to make a direct flight from Kufstein to Mittersill. When reaching the last one, I already climbed to 12.000 ft, so passing the Tauern pass between the Grossglockner and the Grossvenediger mountains was an easy thing to do. 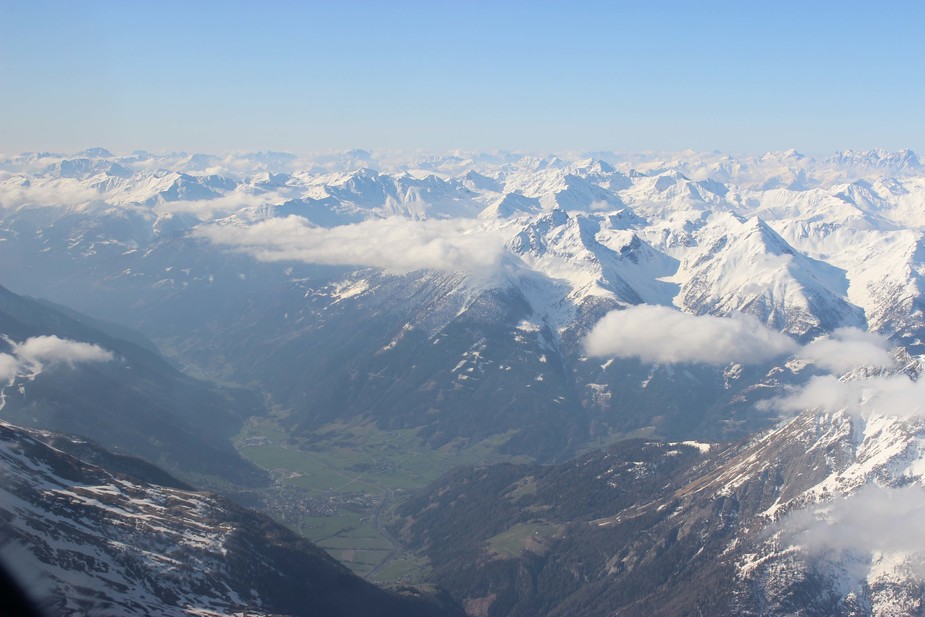 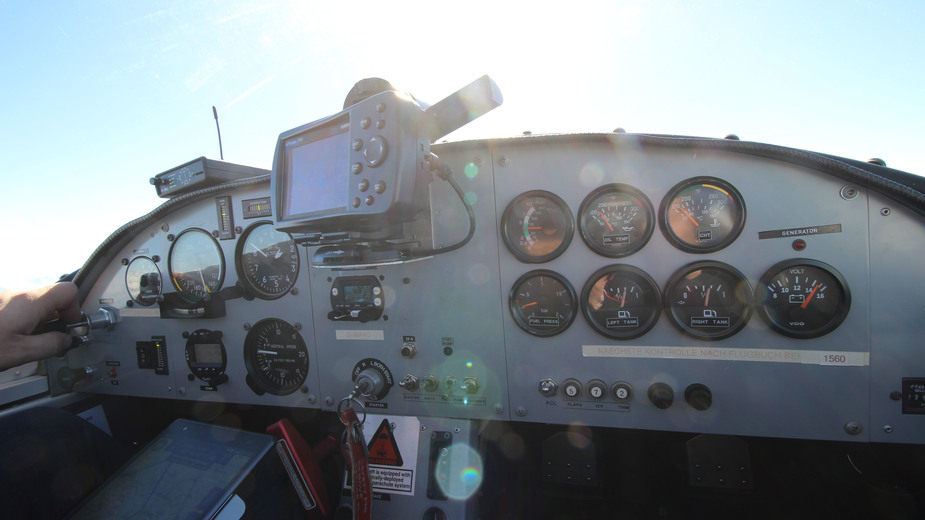 After the Tauern pass, the only clouds I ever saw on our trip appeared: Some little stratus clouds in about 8.000 ft. We were happy to overfly them in 12.000 ft with no turbulences at all. I never ever had such perfect conditions in the Alps before! 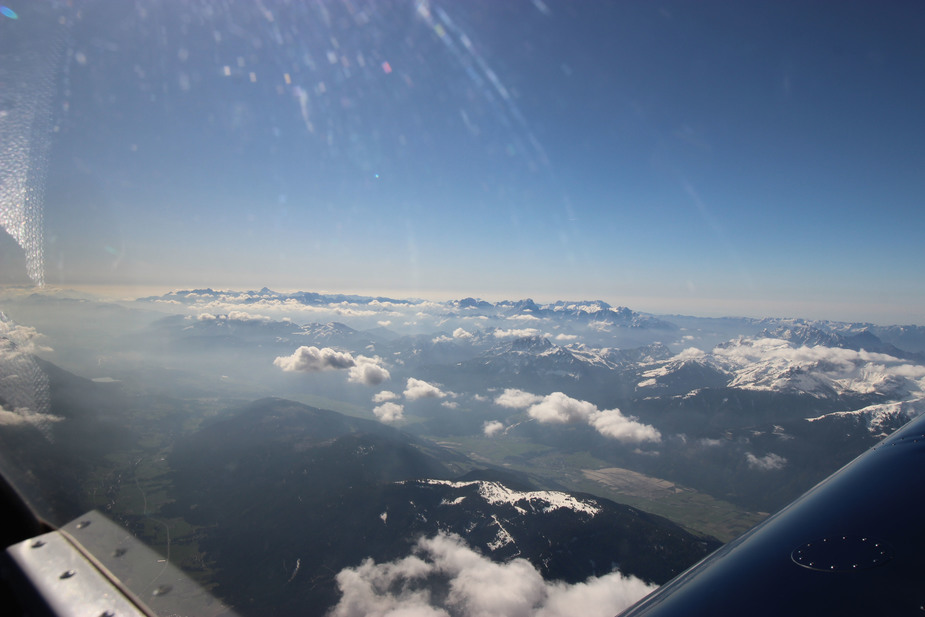 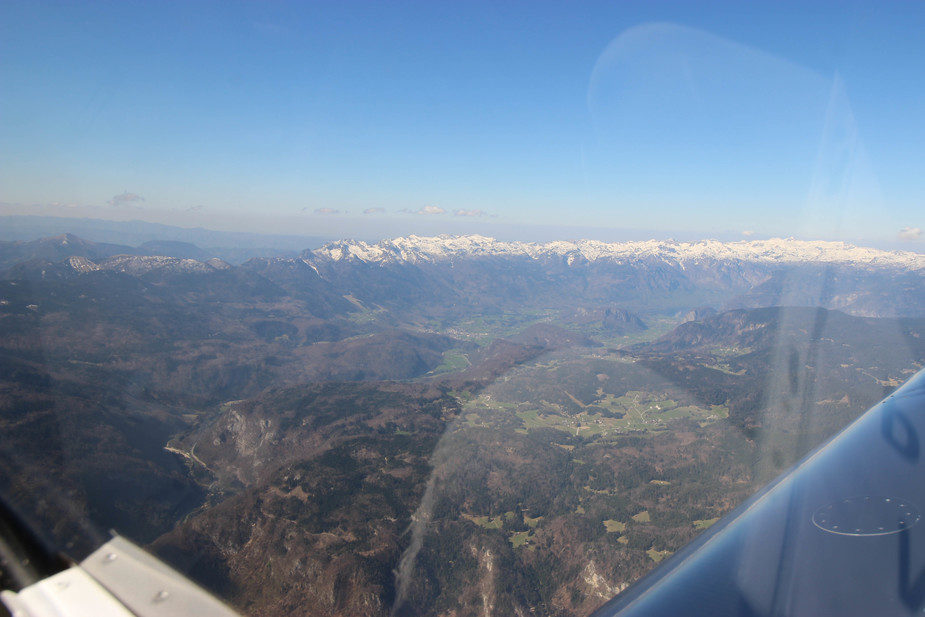 The rest of the leg to Portoroz was easy: I followed the VFR-Route 3 down south until I reached the CTR of Portoroz. Followed by a slightly high landing (I had to slip to get my plane down on runway 33), we refuelled and did the customs for our next little “hopper” to Losinj. Everything was organized perfectly in Portoroz, the definitely know how to satisfy their customers, I never saw a more professional handling than there. 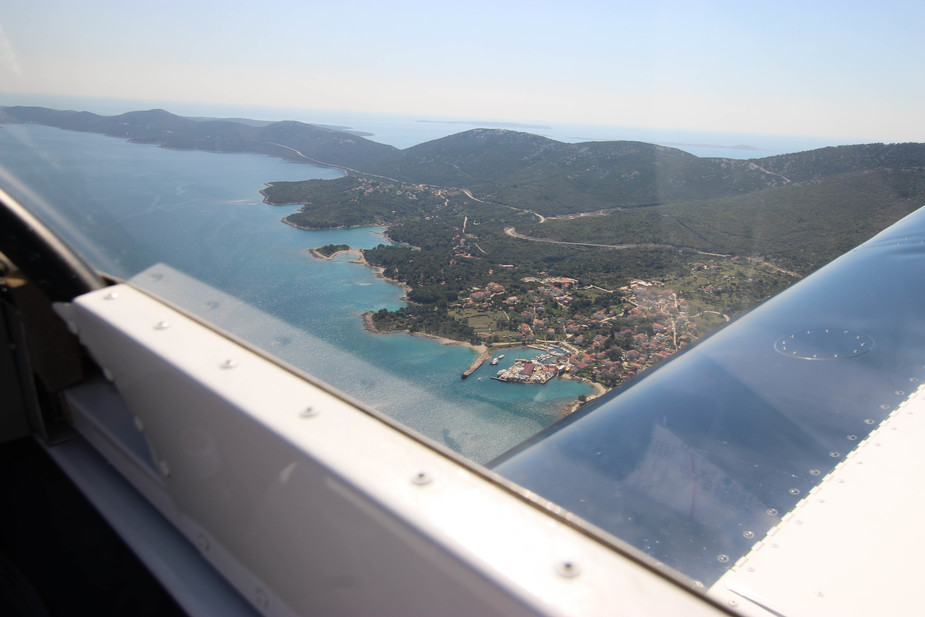 The next flight was a little more bumpy, since we were deviated over the Istrian peninsula due to a military manoevure along the coastline. The thermal lift ended abrupt after leaving the main land and flying over the sea along the coastline of the island of Cres – very scenic! 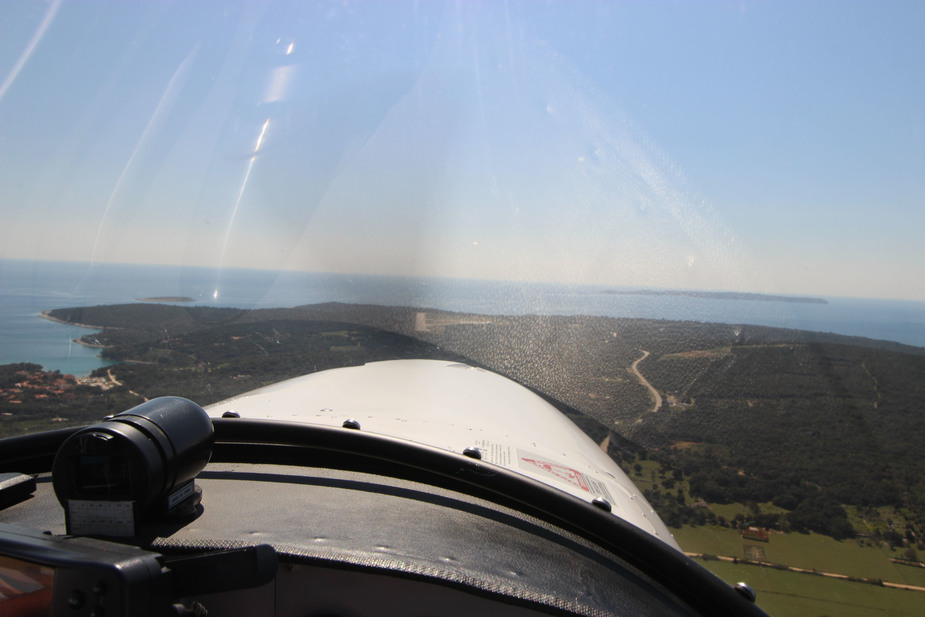 We followed the island down until reaching the junction between the two islands, Cres and Losinj, at Osor. Originally, both islands were connected to each other, but the Romans divided both islands to make transports even faster. Nowaydays, there is a bridge to join both islands together again. The bridge is also the VRP Oscar 1 of Losinj Airport, and so I contacted the tower there, getting a clearance for the right base, runway 20. The approach was breathtaking: The Adriatic sea right below us and a small mountain chain with a small wind gap in between, the runway in the background – fascinating! Touchdown was easy to do on a runway with approximately one kilometer. 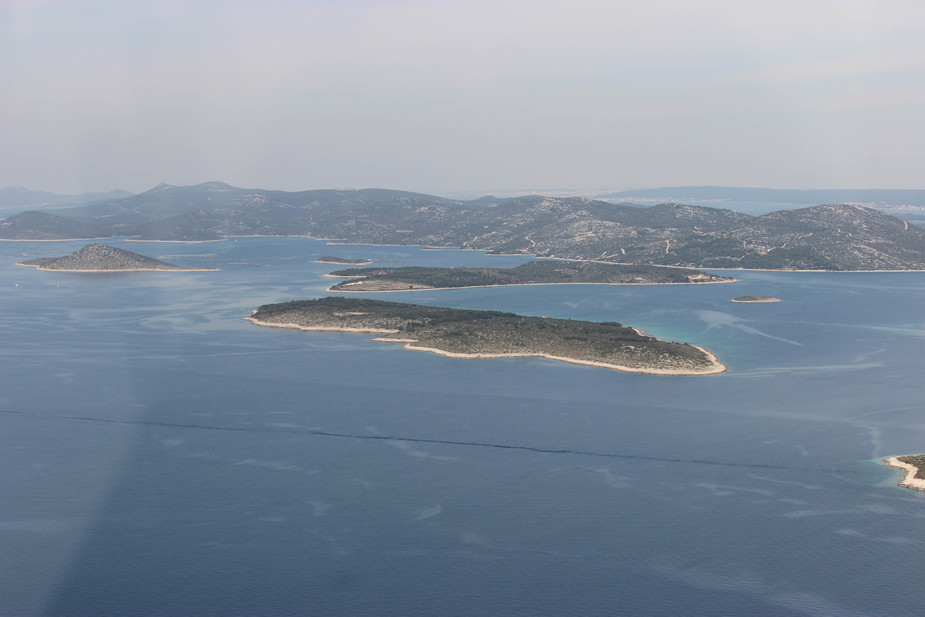 Being welcomed by friendly guys, who clamped our Zodiac to the ground, we entered the immigration and customs barracks. Everything was easy and so we drank our landing beer at the “El Paso” bar directly at the airport – the drinks and food were very cheap and tasty.

The next days we stayed at the Mare Mare Suites, directly at the inner harbour of Mali Losinj, the capital of Losinj. We got a junior suite for 100 Euros per day including breakfast, that’s alright for two people. 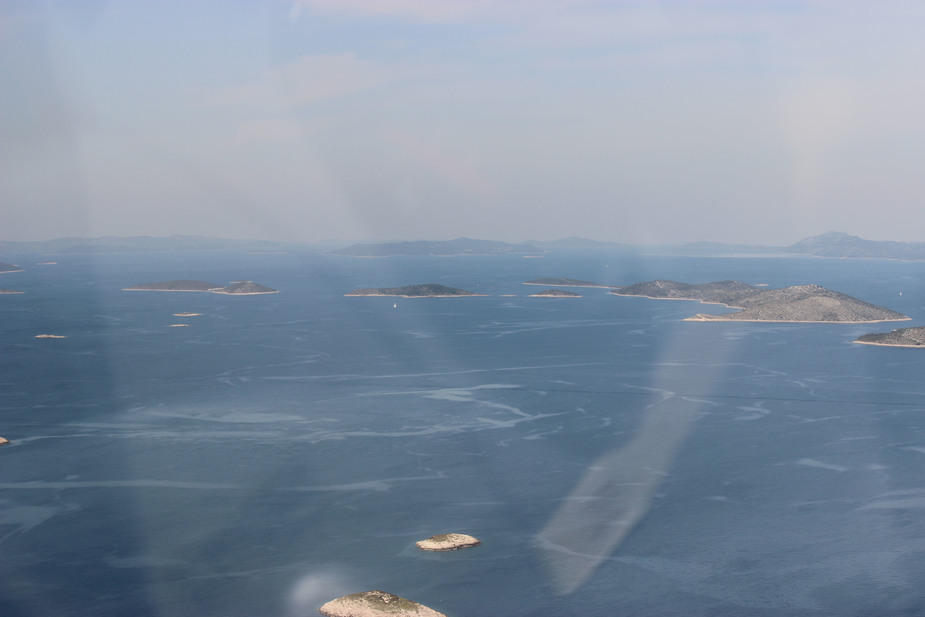 On Easter Saturday, we met a guy from ulforum.de, who followed us all the way from Hamburg to Losinj – great trip and a really cool guy! We discovered the island with bikes from our hotel that we got for free – perfect service! 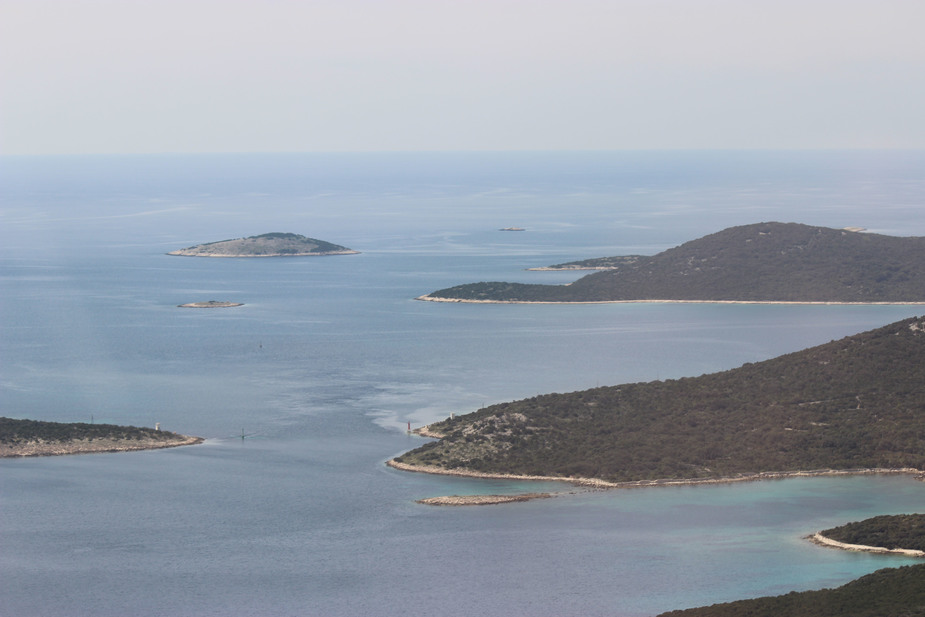 On Easter Sunday, we made a trip along the Croatic Islands… exilharating! I never saw such a beautiful place on earth from above. We turned around at Otok Zirje and followed the coastline towards Zadar, that was also very beautiful. After another smooth landing in Losinj, we spent the evening at the Lanterna restaurant, located directly at the sea with a tasty dinner. 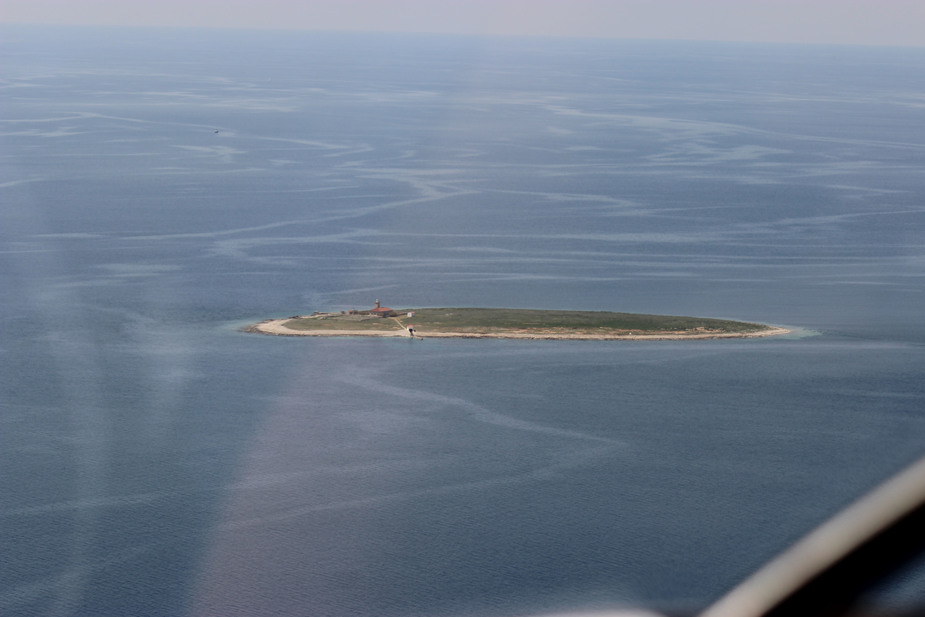 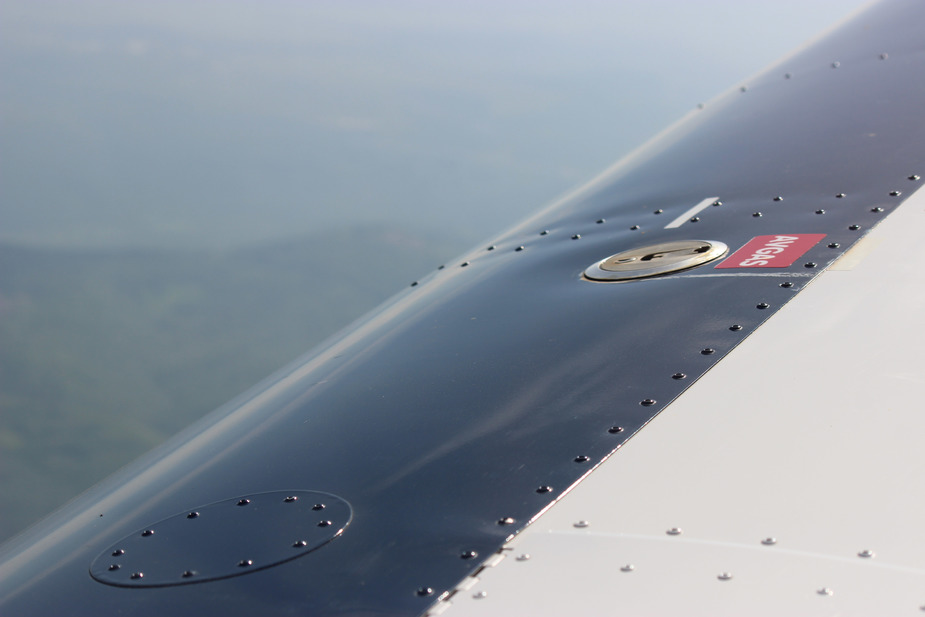 The next day, weather was again perfect, but the CTR of Losinj was deactivated at short notice. So we did all our checks and took off by ourselves. Since we had not to follow the reporting points, I flew directly north towards Pula to cross the airfield and then follow the coastline to Vrsar until my landing in Portoroz for fuel and immigration. 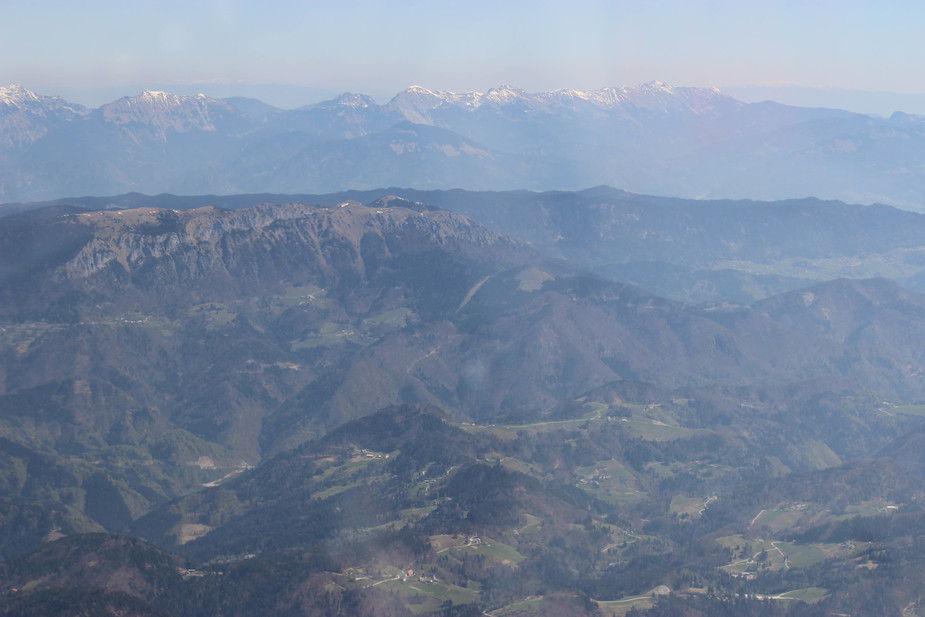 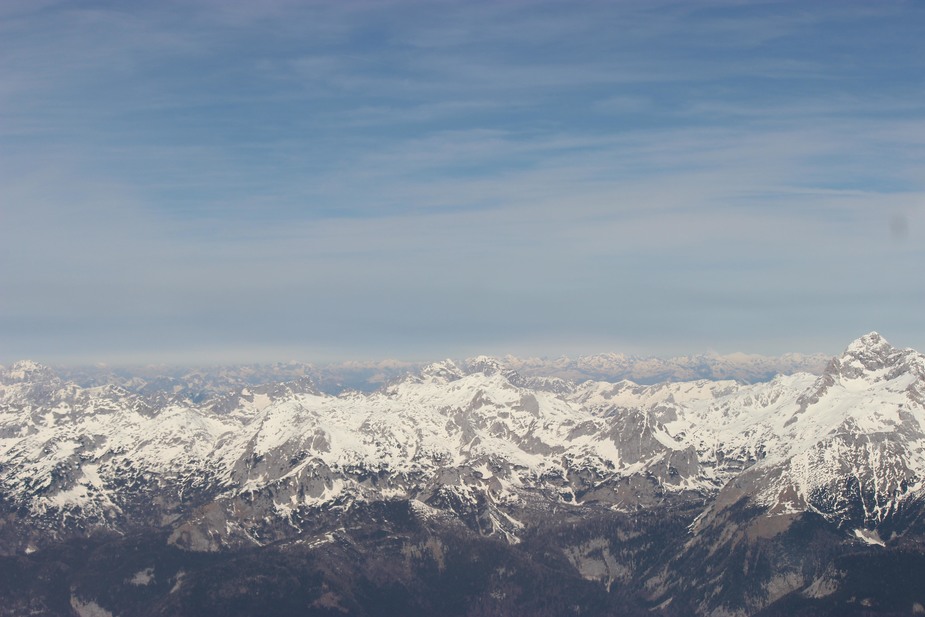 Everything went well again, and so we departed after only half an hour in Portoroz towards EDSO. The experiences I got three days ago when crossing the Alps helped me to be not that scary, and so I flew a direct course to NIPEL and then following the Gail river towards the Felber-Tauern. After having crossed the Alps rock outcrop, I did a direct course to Kufstein. From there, I took a heading of 300° to my homebase, but now with a tailwind of about 30 knots. What was great for my overland flight, was bad for the landing… 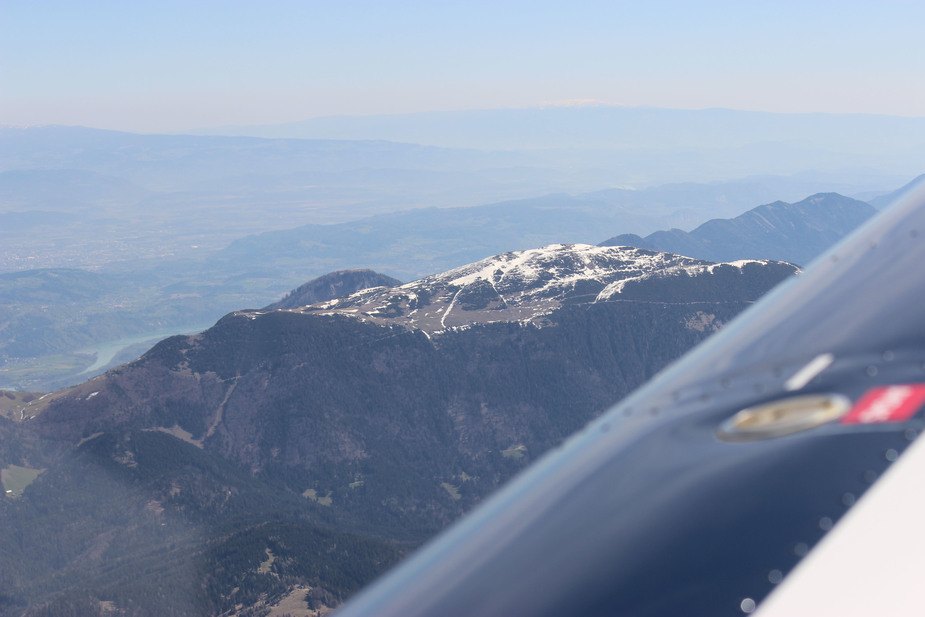 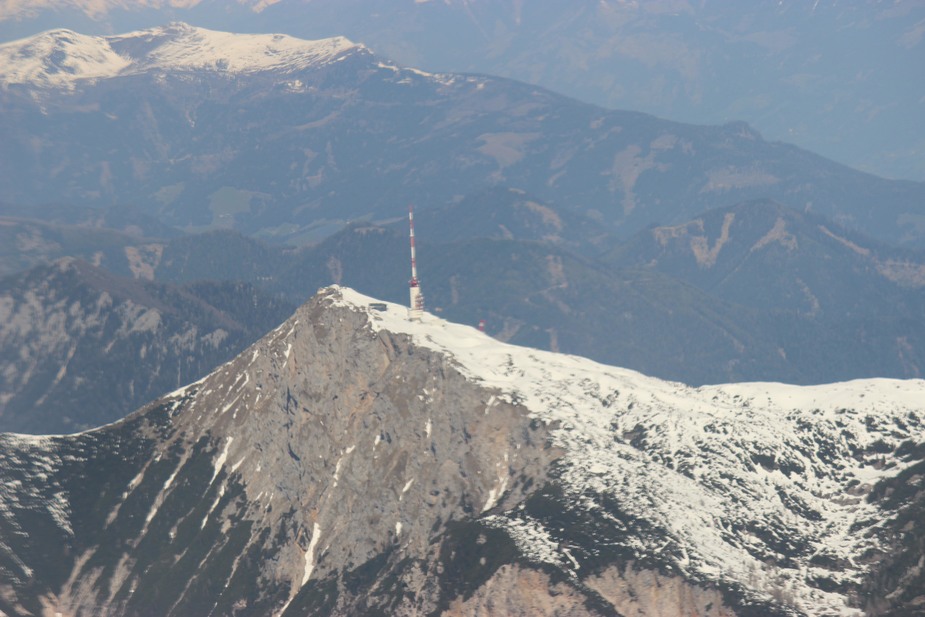 The most difficult part of my journey was to land at my homebase. With and east wind of about 30 knots, there were many hard turbulences at the mountain edge of the Swabian Alb – at least for a microlight. 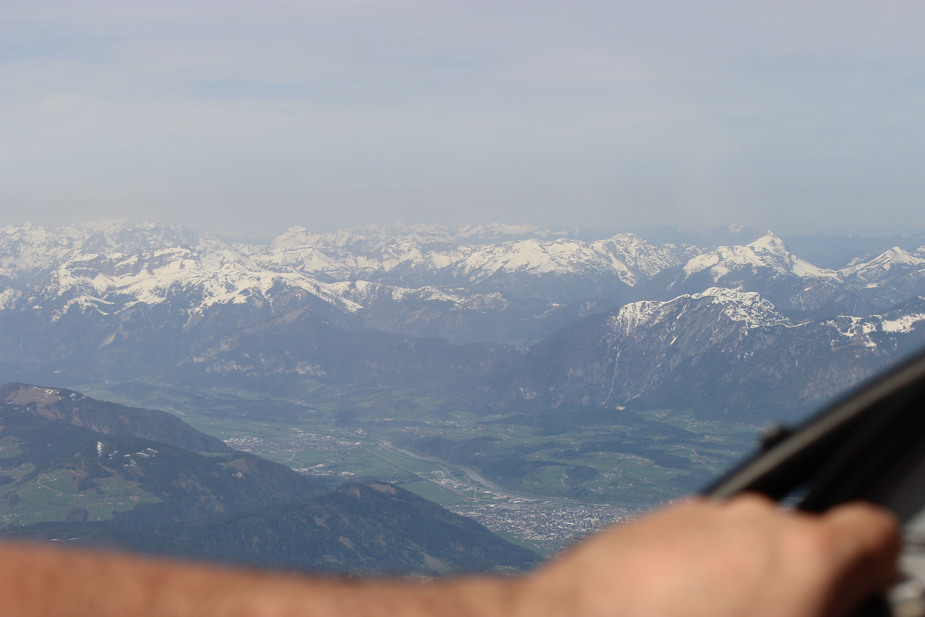 After a – not expeceted – perfect landing, we cleaned our D-MAAO and were already planning our next trip :-)

Please excuse my not-so-perfect English; if there is anything ambiguous or wrong, feel free to contact me!

Amazing photos of the alps, and glad everything went to plan

Great trip report, thanks for sharing.
If my German was only half as good as your English I would be very happy!

Thanks for this report, this gives nice picture of possibility for VFR touring.

Not just VFR, but in a ultralight! I do wonder why the red ‘avgas’ sticker though…

Off topic but true story: Tried to refuel a PA28 with AVGAS UL91 at Ängelholm ESTA (the only AVGAS type available there). BP’s self-service station refused to accept my BP AVGAS carnet with a cryptic message. I had to call ground staff for help. They explained that since the fuel was UL91 and not AVGAS, the AVGAS carnet wouldn’t work. I argued that UL91 was certainly AVGAS, but of course arguing with staff didn’t help as far as the machine was concerned. So then I asked to pay “manually” with a regular credit card. The staff asked if my aircraft could use UL91 and I said yes. They were very worried repeating the question several times, saying that they could not be held responsible for engine failures etc. In the end they handed me two UL91 placards which I had to stick to the aircraft before I was allowed to refuel.

I have been given those stickers at various places, as a condition of being sold avgas. I think the last place was LGIO in Greece. The wing was so hot they barely stuck and I peeled them off as soon as the guy drove off. I had emptied his entire bowser anyway

Nice report TobiasM and thank you for posting it. It is always nice to do an “early” trip over the Alps because there is still plenty of snow on them. In fact some ski places were open in late April.

Great trip in a ultralight ! You were flexible and that’s great for VFR touring. Thanks for your report, it will help others expand their wings :)

The feeling of achievement and pride after a long VFR trip like this is just unique.

Nice Report Tobias! I did a similar trip last year (but from Munich) and I have been longing to do it again! Next time extend it to Zadar if you can, they have a quite little old town! Unfortunately I don’t know when I’ll get a chance to do it again, now I am in a club in Cannes Mandelieu where the planes are always booked, taking one for a couple days seems very hard to do :( If anyone one has tips of someone wanting to rent out their private plane down there I am all ears!

FullThrottle
LFMD, Monaco
14 Posts
This thread is locked. This means you can't add a response.
Sign in to add your message