How bad can an instructor be? (a badly planned trip via the Balkans, and border crossing issues in Europe)

This astonishing article appeared in the last US AOPA magazine, about a flight done by what appears to be a European instructor.

I emailed them, saying basically that if one listed all the things he didn’t do right, it would be as long as his article… 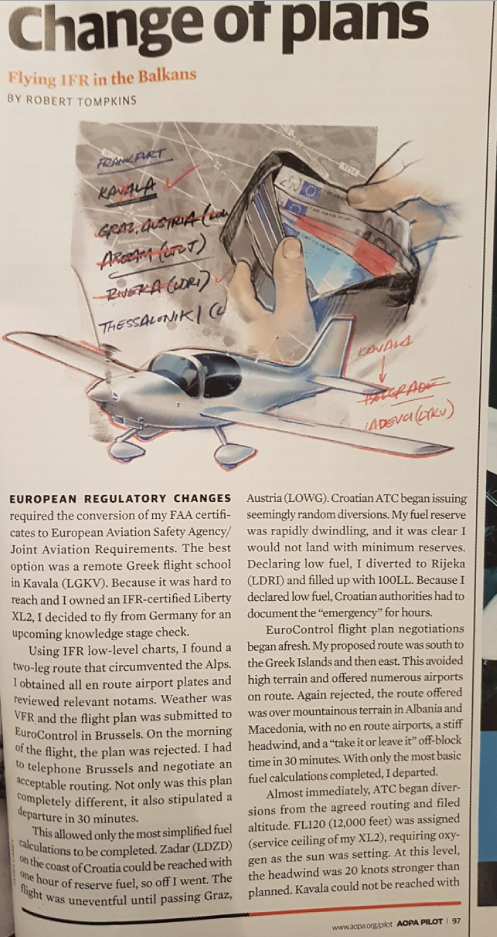 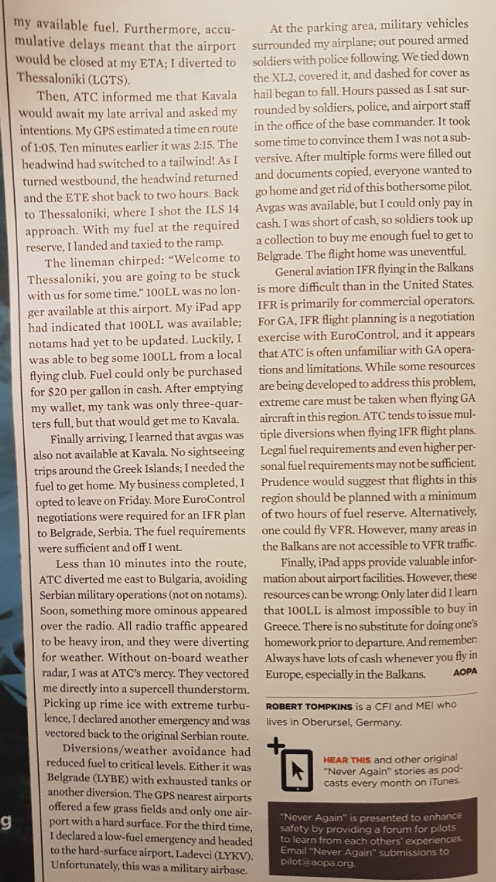 I wonder which “Ipad app” said LGKV has avgas? And LGTS?

This magazine is normally very good (I get it monthly, with my US AOPA membership) but they are vulnerable to some right cock and bull stories from Europe.

It is not quite at the level of this old classic though (from the same bit of Europe, and it is true; I know someone who knows that pilot)

This sounds completely unlike any trip to the area I’ve read on EuroGA so far. I wonder how he filed his flightplans? Also a Liberty XL2 seems to have a range of 500 nm (source: Wikipedia), which is not a lot for this kind of trip, but his planned routing is more like Peter would plan in his TB20…scratching my head here.

He is suggesting: no one can do it IFR or VFR in Balkans without an aircraft that can carry 6h reserves on a 4h endurance ;)

Jokes aside, he could have done it VFR in a much “western style”,

The EGTR trip to the Alps that guy is a real cowboy: to do it in full on a PA28 with full family, the sky is the limit !

(I like the comment “some sort of IMC/IR rating is a must”, I had the impression you may need oxygen first after all)


This astonishing article appeared in the last US AOPA magazine, about a flight done by a European instructor.

I emailed them, saying basically that if one listed all the things he didn’t do right, it would be as long as his article…

I think you may be missing the point. Articles like this aren’t published without understanding or reason – AOPA is a political organization with an agenda, and that agenda has little to do with impressing European IFR pilots

The introductory paragraph of the article explains that like most Pilot readers the author is an experienced FAA-rated pilot with no EASA pilot qualifications (i.e. not a European instructor) and that the purpose of his flight was to make a simple 700 nm cross country flight to train for EASA pilot qualifications that are now required of him. His Liberty XL2 is exactly the right fit for the profile of an American pilot based in Europe: designed by Europeans for local conditions but US manufactured and FAA certified. I’d assume it is N-registered. My take on the rest of the story is that as most American pilots would be, he was completely unprepared on several different levels to deal with the byzantine, unpleasant, costly complexity of European international flying – even if it were done ‘right’. That message as conveyed by the story with some degree of artistic license supports the AOPA agenda in preventing anything similar from developing in the US. That’s the important part for AOPA.

Silvaire that is the way i read it.

Loads of technical mistakes as peter says, probably some artistic reporting, but it does demonstrate how poor europe is at “doing ga”. As just one example, establishing who has fuel, when and how, is always best by email or phone and never rely on anything else!

I am sorry but political agenda or not, this guy should never be certified to fly in Europe. Maybe I am being harsh here, but he will do himself an injury or worse if he continues like this.

His fuel planning is totally unacceptable, the airplane is unsuitable for the trip he is planning and he himself has no idea. 3 fuel emergencies on a trip with how many legs is simply a sign the guy is not qualified to operate an airplane.

Frankly, a pity the Serbs did not simply send the guy home on an airliner and let a qualified pilot fly his airplane out of there.

It is people like this who give GA a horrible reputation in many countries in Europe, who consequently will think they are much better off without it.


His fuel planning is totally unacceptable, the airplane is unsuitable for the trip he is planning

FWIW public online records indicate to me that the author of the article is a US citizen who holds an Air Transport Pilot Airplane MEL and CFI, who works or worked as a university professor in Germany and also has a US residence at a well known fly in community. Given his academic specialty I expect he would be extremely good with arithmetic such as that required for fuel planning. The aircraft is N-registered.

I read the authors point as being that fuel planning was near impossible for reasons like ATC delays and no reliable airports and services… wasn’t that the point of the article? A 700 nm flight in a well equipped Liberty XL2 is exactly what the plane should be used for, either VFR or IFR. My 72 year old 65 HP aircraft has been flown from US coast to coast and back with no radio except a handheld, no transponder and very little interaction with anybody that could annoy them or the pilot. It’s no problem, assuming 82 kts is fast enough for you and you can tie the plane down so it doesn’t blow away


It is people like this who give GA a horrible reputation in many countries in Europe, who consequently will think they are much better off without it.

They’ve never had real GA and know nothing about it.


They’ve never had real GA and know nothing about it.

Maybe not, but what is real GA? I mean, we would have lots of more of many things if they were state sponsored like GA in the US. It’s basically like someone used to free beer wherever he goes suddenly comes to a place where he has to pay for it. Not only will there be a lot less beer around, but it will also be hard to get hold of. He would have to find a pub first, then it will be literally infinitely more expensive than what he is used to.

So AOPA US want to continue with state sponsored GA. Who wouldn’t ? and why not throw in some free beer while at it.

To me, reasonable accommodation for normal people flying their planes here and there (e.g. runways without parasitic people or hassles, self serve gas and rational airspace) isn’t very much like free beer, the lack thereof or anything decadent. When it isn’t there, the situation is more analygous to the licensed driver of an electric car trying to make it across 1000 km of Central African tracks to visit a friend… without having independently pre-studied the trip for 5 months, and lacking ‘driving qualifications’: that is, how to rub sticks together to make a fire to run a Stirling engine to run a generator that charges his batteries, while simultaneously negotiating €500 payments to the local tribal prince in Esperanto for stopping on the side of a road that he’s been claiming to control since late summer


FWIW public online records indicate to me that the author of the article is a US citizen who holds an Air Transport Pilot Airplane MEL and CFI, who works or worked as a university professor in Germany and also has a US residence at a well known fly in community. Given his academic specialty I expect he would be extremely good with arithmetic such as that required for fuel planning.

Well, I am a former flight dispatcher and not very good at maths outside that and I have flown in that area. Flight planning is more than just programming an Ipad. It also means you have to know what the heck is going on in the area you are flying and how the situation is. Anyway, why does he have to fly to Greece to get his EASA license? Doesn’t make sense at all. He had hundreds of flight schools much closer who would have assisted him with that job.

I am no professor and have very few experience flying longer routes, much less than some here. Yet I do know that most airports in that region have no avgas and many others are for all practical purposes isolated destinations, as the nearest alternate at the speed of a Liberty or similar airplane are quite some distance. If he runs out of fuel in the air and has to land as an emergency not only once but almost on every leg he does, I don’t care if he is a professor, but that tells me he is NOT fit to fly in that area. No, it’s not impossible to plan but it does require some knowledge of how the system works.

Participants in this forum and others have known the avgas problems and other issues flying there for ever.

Well, if he has learnt the lesson, hopefully he will know how to work this area in the future. I would say he was lucky he did not get arrested or at least got a heavy fine for his shortcomings. If this warns Americans who think similar to fly in Europe, then maybe this article might save some from embarrassment or worse.

Mooney_Driver
LSZH, Switzerland
154 Posts
This thread is locked. This means you can't add a response.
Sign in to add your message

Back from the Balkans...
Secrets of Greece?
Temporary Schengen suspension around Europe
Homebuilding in Europe