That’s why I said “From details given so far”!


I am confused. Are Robin_253 and pilotmark the same person?


you are Polish but you don’t have the balls to use your real name & location.

So what if he’s Polish? He can be Martian or whatever, I don’t mind as long as he can draw hard proof evidence for his claims. You don’t use your full name, me neither and majority of people here don’t user their real names at all.


Michael did not write that any of the details you posted were not honest.

I am very happy that all the facts cited by me so far do not raise objection.
From the beginning, I said that I did not know all the facts. Nobody does.
I have some questions that I do not know the answer to, maybe you can help me with that?

But before I come to the unanswered questions, let me summarize the facts that do not raise any doubt:
1. The aircraft belonging to “Pilot” is / was held against his will in hangar operated by “Jesse” employer, “Vliekwerk” at EHMZ since 11.08.2017.
2. Jesse prevented the pilot from accessing his own aircraft for engine maintenance.
3. “Jesse”, acting on behalf of “JP Avionics (een handelsnaam van JLK Design & Technology)” presented the pilot with an offer regarding avionics installations.
4. Jesse tricked 18 910 Euro from the pilot by misleading the claim that the avionics maker makes the rebate conditional upon the payment being made within the given deadline.
5. In total “Jesse” received a sum of over 34 500 euros from “Pilot”. In addition to that, he received new avionics of considerable value.
6. The pilot paid upfront for the entire invoiced equipment cost and for labor related to the installation of the GTN radio.
7. The entire installation was to last about one month.
8. On 13.04.2018, after 8 months since aircraft delivery, the installation was not completed and not released to service, however “Jesse” acting on behalf of new company “JP Avionics BV” demanded full payment for the installation. This new company did not submit any offer to “Pilot”. The pilot has not entered into any business agreement with “JP Avionics BV”.
9. “Pilot” did not pay the bill above. He said he was ready to pay for any equipment that will be properly installed and released to service.
10. Although the unpaid invoice is inconsistent with the arrangements made in the offers sent by Jesse to the Pilot and even though it was issued by a company with which the “Pilot” did not enter into any contract, Pilot was declared a debtor and his property was taken away from him without any court verdict.

Now going to the questions.
Does any of you have knowledge about EASA STC for EFD-2000" Specifically, I"m fishing for information on the date when the STC documentation was submitted to EASA for approval" And when the application was withdrawn?

There are probably more sides to this story…

Thanks for correcting me.
I would love Jesse to publish a court order here that allows him to take possession of this plane.
But you know what? I don’t hold my breath

He doesn’t need a court order. While I only skimmed the corresponding Dutch law, it appears to be the right for the workshop to hold on to the aircraft until the bill is paid, which is pretty much universal in both Roman law and case law systems. It is also a moot point given the aircraft is not currently flyable.

The general advice to car owners, who can find themselves in a dispute with a workshop about work (not) done or work quality, is to pay the invoice under protest/reserving their rights, take the car, and then make a claim for repayment and/or damages. The exact way to do this is country dependent.


From the beginning, I said that I did not know all the facts. Nobody does.

But you still pass verdict.


But you still pass verdict.

No verdict, just the facts


He doesn’t need a court order. While I only skimmed the corresponding Dutch law, it appears to be the right for the workshop to hold on to the aircraft until the bill is paid, which is pretty much universal in both Roman law and case law systems.

I beg to differ
But let’s look at the documents first
Jesse and Pilot are bound by two contracts concluded on the basis of 2 offers.
The first offer is here
https://www.euroga.org/forums/hangar-talk/9988-how-to-lose-your-plane-and-35-000-euro/post/193749#193749
The second offer is presented below 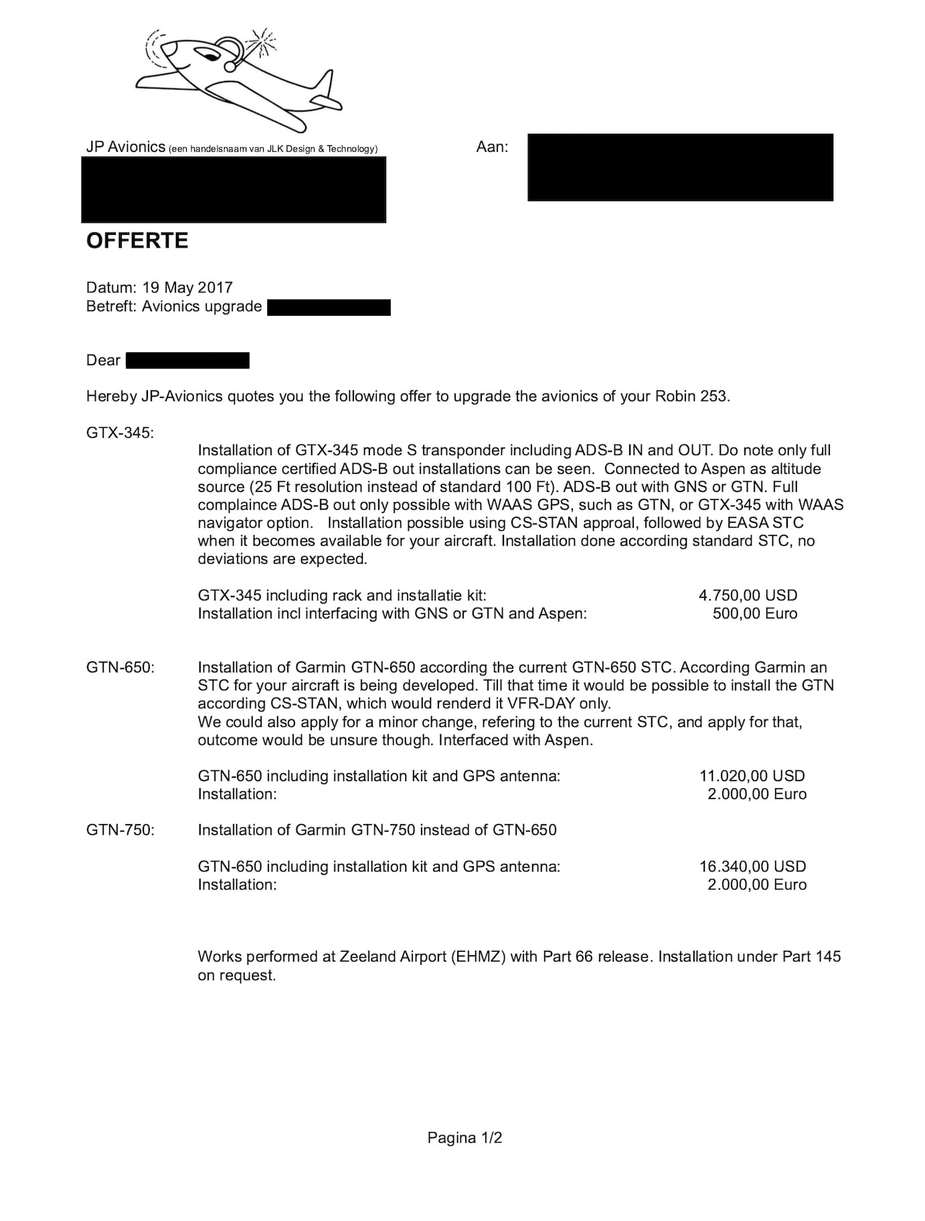 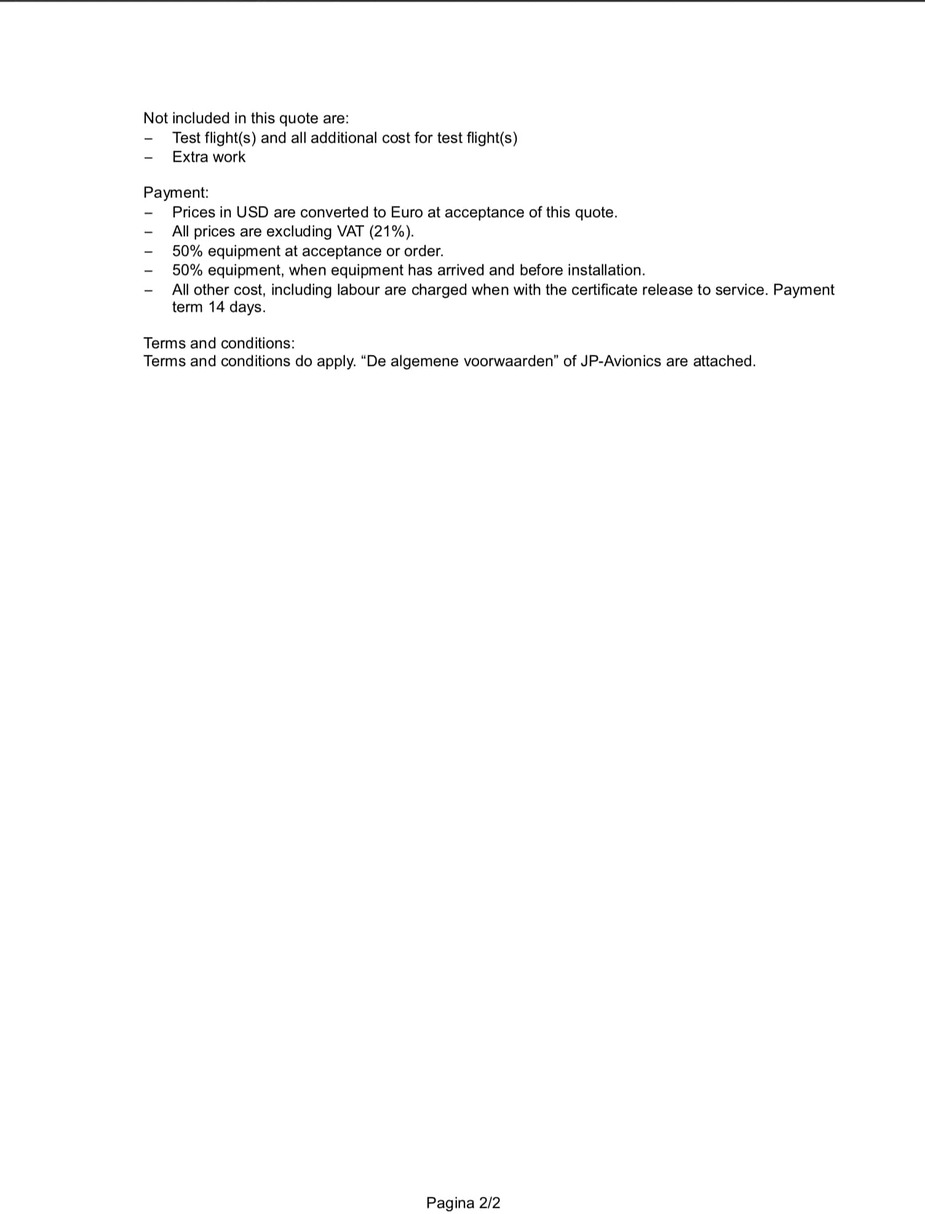 Both first and second offer specify the same terms of payment for labor: ‘with the certificate release to service’.
the process is thus defined unambiguously and precisely:
release to service → invoice → max 14 days → payment
or in a different way: the condition necessary to issue an invoice for labor is release to service.
As I wrote before, nothing was released to service, so according to the terms of both offers, no labor invoice could be issued. No invoice equals no payment. For the record: all previous invoices were paid immediately by Pilot.
There is also another reason why the invoice presented here
https://www.euroga.org/system/1/user_files/files/000/035/880/35880/73a5a70aa/large/2.jpg
could not be paid: It was issued by a company with which Pilot did not enter into any business relationship namely: ‘JP Avionics BV’ This company has absolutely no legal title to request any payment from Pilot. I would add that there is no sign that ‘JP Avionics (een handelsnaam van JLK Design & Technology)’ that is the company which could potentially have legal title to request money did ever send any invoices for labor to Pilot.
Bottom line: none of the companies controlled by Jesse can expect payment for labor. Jesse needs a court order to retain the aircraft. I’m not aware of any such document.

pilotmark
LFCL, France
105 Posts
This thread is locked. This means you can't add a response.
Sign in to add your message