How do the requirements to become a CRI differ from those to become a FI, especially in respect of written exams?

It seems to me that the uses of the FI without CPL exams are very narrow and basically useless. Almost nobody is doing the LAPL and even if you do the IRI (needs a lot of hours) the demand for freelance IRIs is small. That leaves revalidations but a CRI can do those. You can teach the IMCR but not freelance and would a school take you on?

The money in instructing (ha!) is for ME-IR, and you don’t need to be an FI to do that. You just need to be a CRI for ME and and IRI.


Apply for the CRI! There’s no reason for the CAA not to issue it since the FI-course is so much more intense than a CRI-course. You need to have more flight experiences though (300hrs on aeroplanes).

I will be attending an FIC next summer once I have my CPL exams (hopefully) passed this year (7 Passed, 3 Booked for Thursday and the remaining 3 in pencilled in for September).

I am also interested in having a CRI (SE) Rating added to my licence on the basis of an FI(R) AoC Pass (fingers crossed!). Quick question to all, does anyone know if the ATO has to be approved by the CAA to teach the CRI(SE) course in order to do this? The reason I ask is because the two ATOs local to me (I live in Scotland) approved for the FIC are not explicitly approved for the CRI(SE) according to the CAA Document whereas a few of those ATOs I have been looking at further South are approved for both courses. Is it a simple case of the Examiner signing off on a CRI at the same time as an FI AoC on the application form and paying the CAA fees for two Instructor Ratings?

Once I have the exams passed I do intend on visiting the ATOs and making a decision so will ask these kind of questions but wondering if anyone knew the answer in the interim?

Anyway, I’ve got answer from Head of Flight Crew Licensing Dept (in Italy) that confirmed that FI Restrictions LAPL ONLY apply only to Initial training for License issueing. All other FI activities are allowed.
Of course eache member state has his own interpretation due to The official version of the Law is the one translated in the National Language of the CAA involved.
Some rumors…are talking about a light version of the CPL Theory….coming for the next spring. Is someone aware of that?

FI Restrictions LAPL ONLY apply only to Initial training for License issueing. All other FI activities are allowed.

That sounds like a reasonable interpretation of the reg as it is written, which is what one is supposed to do with all criminal law

At AERO 2019 , at the end of the presentation of “New FCL requirements for balloons ans sailplanes” that was held on April 10th, the EASA official in charge of the presentation posted the attached slide… saying that one of their current topics was: “Revision of CPL learning objectives”.
But no date was mentioned and that means years in EASA standards … 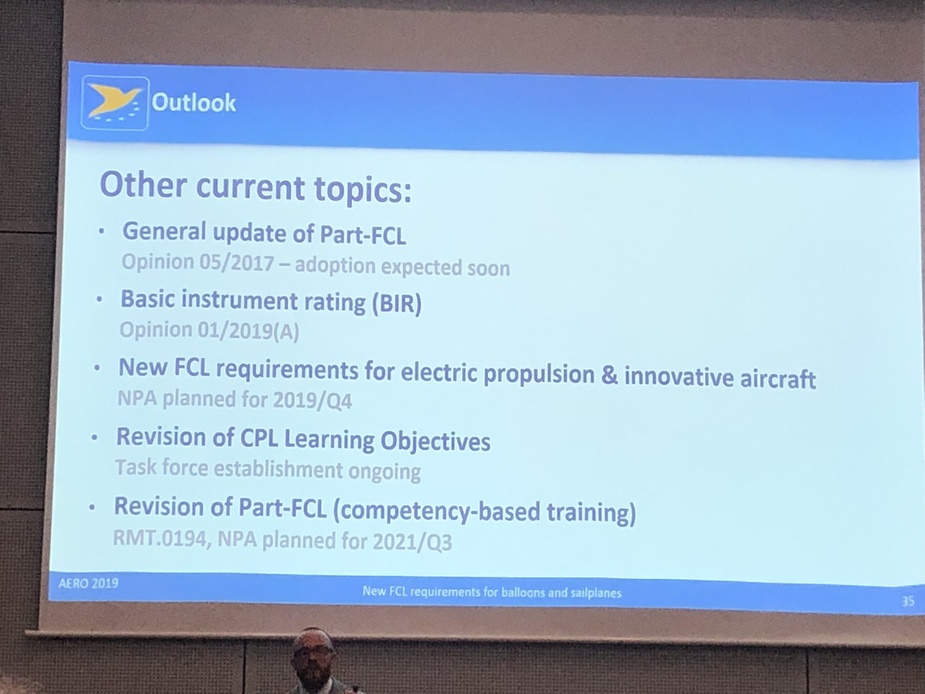 CarlosJ
Carlos
LECU LEFM, Spain
109 Posts
This thread is locked. This means you can't add a response.
Sign in to add your message

How much democracy in the cockpit
Why not become an instructor?
LSA / UL accident rates, and French microlight license
UK CAA allows ab initio training on Annex 1, EASA issues with it, and Annex 1 hours acceptability towards EASA licenses