On the way back through from LGSO had the VOR32. This time I was ready for the step downs and had slowed the plane down prior, having to hold at IBTIN while another flew the VORC.

I flew LGIO today, both the VOR32 arrival and the direct departure to TUMBO which is quick and convenient.

The fully thing is that the Jepp plates I printed before the trip had STARs which obviously joined up to some kind of RNAV approach, but no RNAV approach! I discovered this while briefing the approach on the LGKJ-LGIO flight, 3.5hrs so plenty of time. I don’t know if I made a printing mistake; will check tomorrow. OTOH the KLN94 database had RNAV approaches! I stuck to what I know and flew the VOR32 in GPS OBS mode.

The descent is steep and it is hard to keep the speed down. Eventually I ended up at almost idle at about 5000ft (aerodrome elevation is about 1500) and at 130kt I dropped the gear and Flap1. After that it was ok. The conditions were VMC except around the start of the 14D arc where I was at FL100 but I was running a terrain map. The MSA circle needs 11000ft – see plate 13-1 posted above.

The TB20 cannot do the direct departure to TUMBO and comply with the climb gradient. It asks for FL120 at TUMBO but I could do only FL100. There is a ~9000ft hilltop right there. It was funny watching the red area disappear on the Aera 660 exactly as I climbed through 9000ft. Very accurate. Conditions were VMC otherwise I could not have done this.

Strange that there is no SID that I can see on the JEPP plates that is direct to TUMBO so how can they give you that as a clearance?

I think ATC is authorised to give you any clearance it likes, to be accepted or declined by the Captain, who is responsible for his obstacle clearance at all times except when being vectored, and you will never get vectoring at LGIO because, erm, they have no radar

Pages 10-3H & 10-3J have TUMBO SIDs. They are not “direct” because they put you in a teardrop climb above YNN in order to get to “at or above FL120” 18 DME NW of YNN due to the mountain Peter mentioned. TUMBO is the border fix of LGGG and LAAA (Tirana) FIRs.
If you declare visual then I guess you can opt for a visual IFR departure towards TUMBO when I assume they will still give you the restriction of FL120 by …
Its just a matter of whether you can meet the climb gradient requirement.

On a quick look at those SIDs I thought they were strange because they didn’t connect to any waypoints in the IAPs. It seems that the only way they can be used is for connecting to IAP(s) which start at the airport / at YNN. They cannot be used with the VOR32 which starts at AMIVI 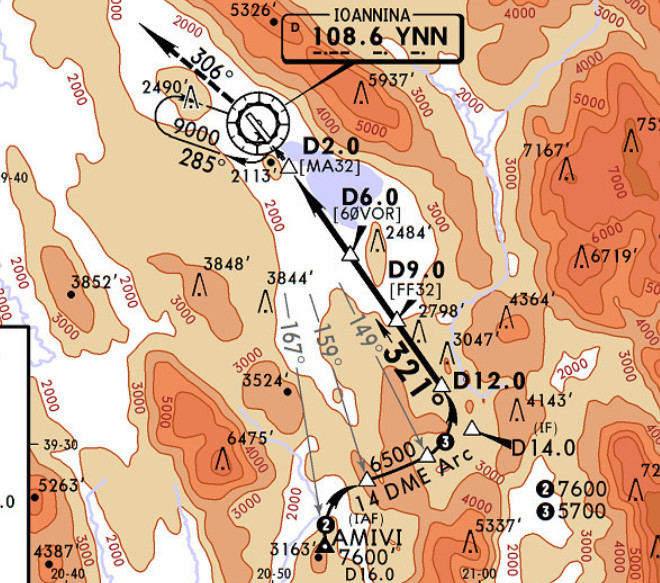 It will be interesting to see the GPS IAPs.

What do you mean ?
IAPs have Missed Approaches. (see here)
Departures are with SIDs. 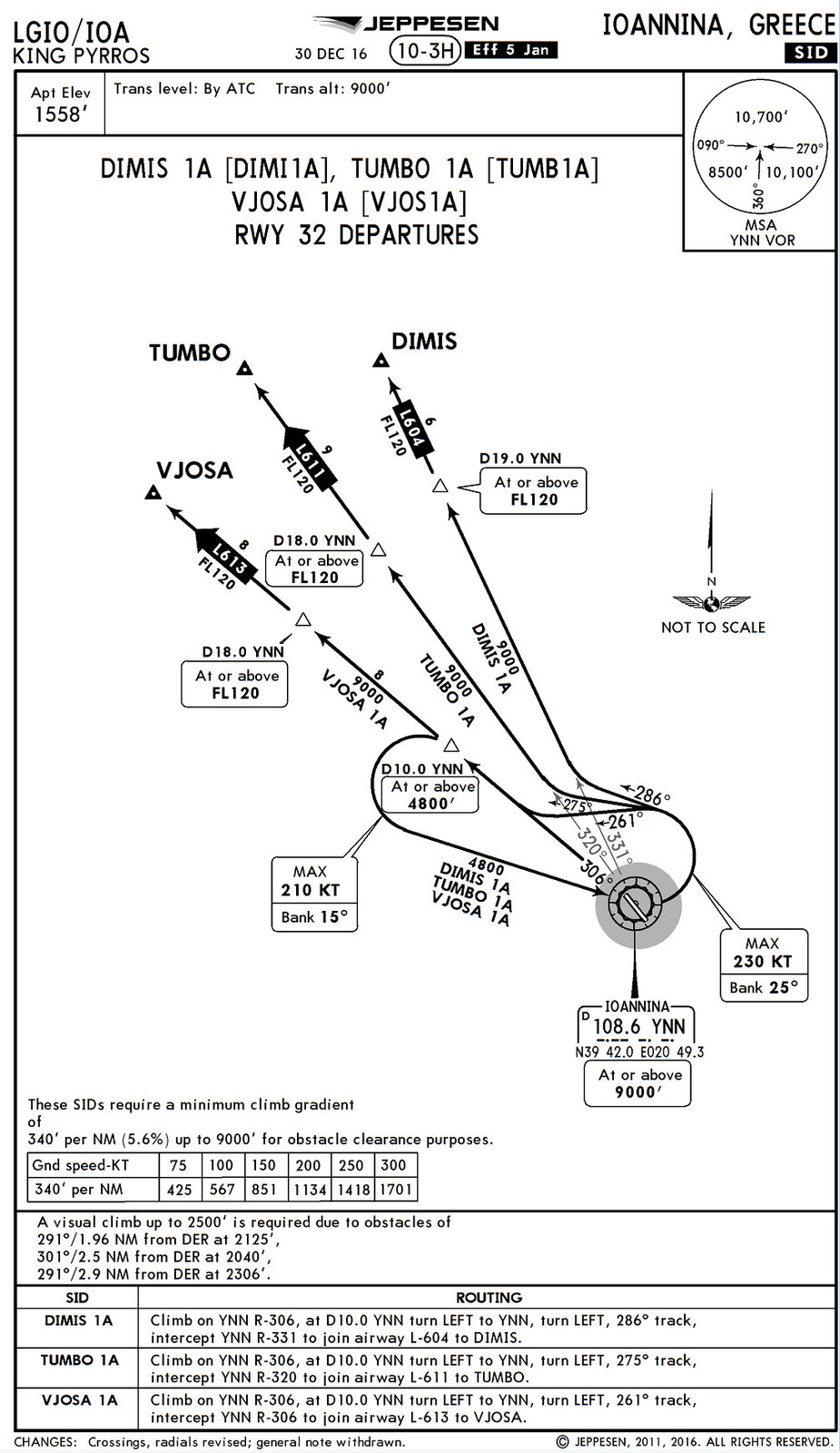 Sorry – a typo. I meant STARs.

Here’s what they charge for a fuel stop at Ioannina LGIO if one doesn’t have an AOPA card. With card it would be 70. 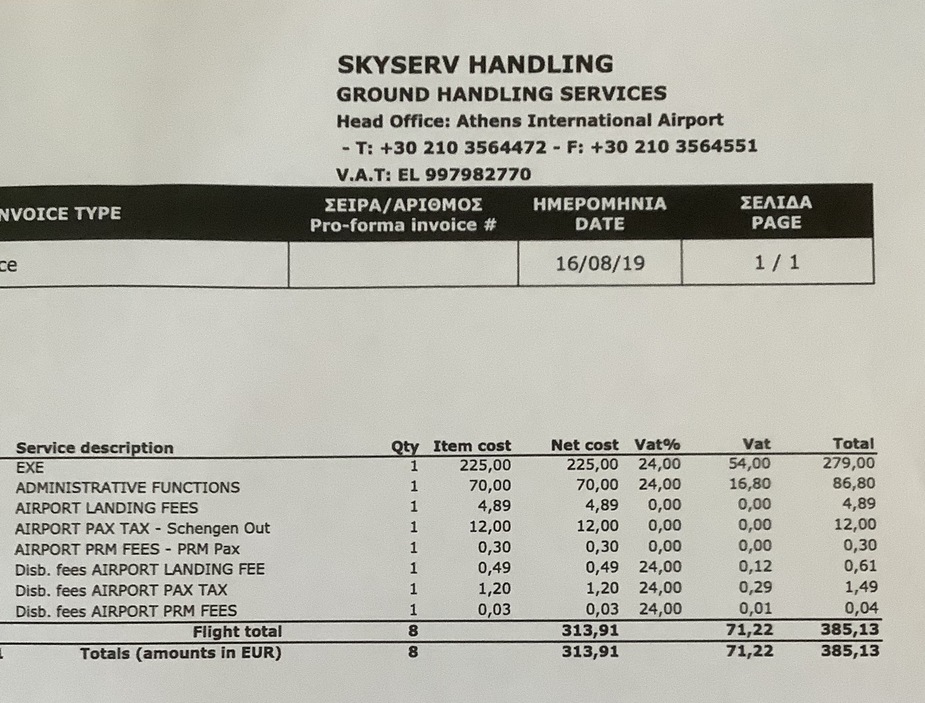 I paid about 50 last year for the TB20, but that was refuel only.

Peter
Administrator
Shoreham EGKA, United Kingdom
62 Posts
This thread is locked. This means you can't add a response.
Sign in to add your message