Here is a Flash tutorial

The reason I bring this up is that, reportedly, when Honeywell/King abandoned this as being unfixable-software, and later went to Aspen to fix it, Aspen ripped out the original software and put in theirs.

So there is a chance it may actually work...

The competition is clearly a GTN750, and possibly the IFD540 if/when that comes out.

Honeywell claim certification is just around the corner

which, if even half true, would suggest that Avidyne blaming their unbelievable delays in IFD certification, FAA lack of funding, them having to do some highly complicated testing to meet FAA requirements, you name it, may not be the actual story.

There are several brochures on the King website, some very old, but this one seems recent.

Interestingly they claim "EPIC/APEX FMS Core". What would that be? I know those are their high end avionics.

Honeywell claim certification is just around the corner

It could be attractive, price wise, IF they can get an STC similarly broad as Garmins AML STCs. For the same price as the GTN650, you'd get twice the numbers of pixels.

If panel space is limted, the GTN750 gives you 50% more pixels in a box only slightly bigger than the KSN770.

The screen looks terribly cluttered. And I thought my map display was cluttered 8-)

Flight plan loading via a USB drive could be nice IF it works hassle free.

Should be worth a second look once more information is known (user- and installation manuals, STC)

Link fixed. Needed HTTP and it had an extra char at the end

Proposed delivery is being reported for the 2nd half of 2008

But maybe Honeywell learnt something from Avidyne's IFD box debacle.

It could be attractive, price wise, IF they can get an STC similarly broad as Garmins AML STCs. For the same price as the GTN650, you'd get twice the numbers of pixels.

Clearly those STCs are the future.

If panel space is limted, the GTN750 gives you 50% more pixels in a box only slightly bigger than the KSN770.

For this reason alone, I would always choose the GTN750. It really is a very nice piece of kit - a very good screen and a well thought out layout (which isn't really true of the 650), and it integrates well with a huge amount of other equipment.

The screen looks terribly cluttered. And I thought my map display was cluttered 8-)

The interface looks very similar to the Aspen PFD/MFD - which is busy but usable. I have high hopes for Aspen - they are by far the biggest innovators in the certified avionics space. Granted, some of the hw was historically sub-par but those issues seem to have been fixed.

The GTN series (especially the 750) does have relatively clean interface.

Flight plan loading via a USB drive could be nice IF it works hassle free.

Full airways loading removes the need for this - it fills in your departure airport automatically, then you type in your first waypoint and click from there, finally typing in your destination. If you're flying a SID it's even easier - just select the SID from the proc page. then tap the transition and select the airway...

Everything seems to have this (certainly Garmin and Avidyne). I wonder if its a certification requirement.

YMMV - my flightplans typically have more DCT and airway segments, so airway loading doesn't help a lot im my case.

Everything seems to have this (certainly Garmin and Avidyne). I wonder if its a certification requirement.

It is part of the RTCA DO-229C/D specification.

An AML STC is a must for any significant sales, because a field approval is too hard for this kind of thing, and in Europe it would be especially difficult not only without an EASA STC (for EU regs) but also without an FAA STC for N-regs.

I can't see the number of pixels matters that much. I have been flying with my KMD550 which is 320x240 (a 4" or 5" diagonal) and it's never been the slightest problem. It's not like a 640x480 screen on an old computer, which severely limits what you can do.The unit displays only a very narrow class of objects, and the principal advantage of a high-res screen (being able to display small fonts) is not relevant because you would not be able to read the stuff.

I suppose that for Jepp terminal charts this becomes a real issue, but I wonder how many people pay the unavoidable full whack of ~€1500/year for that. Unlike with the "desktop" Jeppview product there is no way to share out that cost (apart from syndicating the plane) which is why almost everybody flying with Jepp data is running it on some sort of portable device.... My database costs are just $400/year for the KLN94 and other GPSs are broadly similar to that. One would not update an MFD very often - no point.

A really good touch screen would make waypoint entry a lot quicker, but I agree with Tom... the way things are going in the "optimised route" department, one is going to be looking either at a fully electronic route load, or manually entering just say 10-15 relevant waypoints; enough to get the LFOB fuel figure to compute closely enough. I don't think a solution is going to appear for this anytime soon. The GNS480 had an IR port for flight plan loading but Garmin bought the company and killed the development of that very advanced product. As a result GNS480s fetch very good used prices, with their chief drawback being the future database uncertainty.

I would never go back to a single box - an MFD allows you to see two totally unrelated things at the same time e.g. 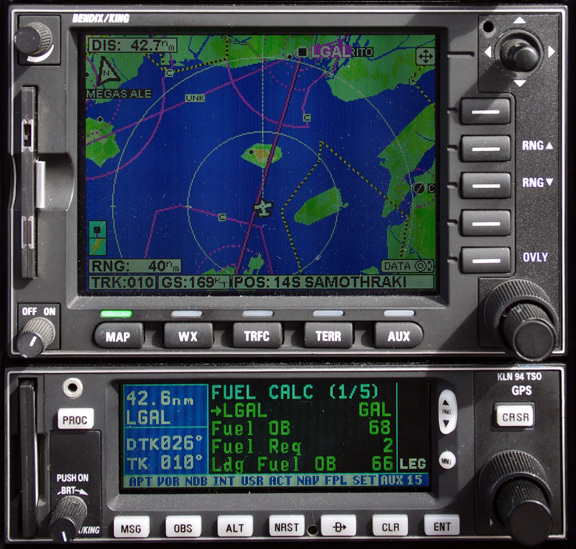 With a big box like the KSN or a GTN750, one is either going to install two of them

or some "fully" compatible MFD and there aren't many obvious options.

To be honest Peter, I find your above display to be rather information free. I need a good navigator to drive my autopilot and calculate LFOB etc. but I don't need a primitive moving map display when I get an unbeatable moving map on a handheld GPS or iPad. Everything your KMD shows, my Garmin 695 handheld does much better.

I find the GNS430W to be excellent. The user interface sucks but it's a specialist tool so one has to learn how to use it. It's got enough graphics to display flight paths. The GTN is slicker but not substantially different.

IMO MFDs are a waste of money in most cases. One argument you mentioned -- they require their own expensive chart subscriptions and given that they're certified, they tend to be outdated and feature restricted.

The most useless MFD ever seen is the ARNAV screen in the early SR20 Cirri. That is a total waste of cockpit space.

The GTN is much nicer than the GNS. On everything since 430w you can upload flight plans from the data cards. Clearly easier since GTN/G1000 as they use normal SD cards.

Garmin taxi charts and enroute charting are far better on the upgraded display. But as Johannes says the 750 is a small MFD. The 650 really an enhanced GPS/NAV/COM.

Peter, concerning the GNS480 database availability, I don't see your concern. The Garmin GX50-60 and even 2001 are end of life for many many years and their databases are still available at Jeppessen.

Well, I just ordered my subscription for the GNS480 and the 2 sales guys at Jeppessen with whom I was talking were both sure that I needed a 400/500 series subscription... I had to call the technical service to have the guy from there explaining to the sales manager that it is a different product.

So basically nobody in Europe is using this marvellous product! It doesn't have a fancy touchscreen, but entering an IFR flight plan is so easy as it only offers you what are the possible next airways at a waypoint. And when modifying a flight plan and deleting an airway, you don't have to delete all the intersections like with the KSN770...

The only real drawback for the future in Europe that I see is that the COM doesn't support 8.33.

ploucandco
Ukraine
109 Posts
This thread is locked. This means you can't add a response.
Sign in to add your message