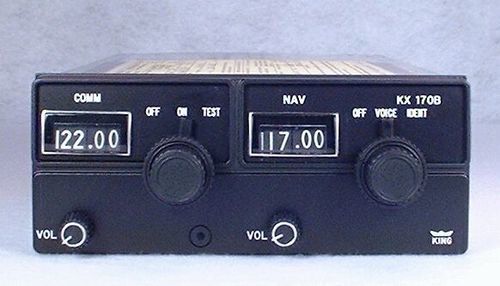 Just wanted to say that I think these are a great piece of kit. Dead easy to use – No manual required. Reliable and just work. They have a nice clunky feel to them which I also like.

Stuff these days is too complicated.

Yes, simplicity and durability is not appreciated by many today – either as designers or consumers. However many of our aircraft were designed by people (many now dead and gone), with a different and very practical point of view. The availability of this kind of hardware at reasonable cost is one of the main reasons I’m involved and invested in aviation and aircraft ownership.

Unfortunately EASA no longer allows us to fit this great piece of avionics because it is non 8.33khz

I hear that the audio quality and reliability is really good on this “new” model, people expect them to last 50 years in damp conditions.

The build quality is excellent, the knobs don’t fall off and the “back light” on the display doesn’t fail. In 40 years time the volume control might get a bit noisy but it won’t fail in flight . Should be a winner!

They are getting a bit knackered and are not easy to repair though. See here.

The only people who can fix them are old guys who learnt electronics and mechanics from the ground up, but most of them are practically retired now. And I am sure the repairs are not legal (none of those I have known are 145 companies) so have to be done off the books.

The King KX radios are actually very reliable except for the red fluorescent / luminescent display, which will eventually become non repairable. But King stopped that line with the 8.33 capable KX165A/8.33 (which almost nobody has) so all the old ones will get chucked out eventually anyway. There is an off the books 8.33 mod for the KX155 boxes, IIRC. An LED replacement was developed for the KR87 ADF but one repair shop told me they cannot offer this legally anymore. Presumably nobody will bother with an LED replacement for the KX boxes because they will get chucked out due to the 8.33 debacle.

What does the test mode of the com radio do ?


And these radios are not useful because of the lack of 8.33 so can be legally used only if you have another box which is 8.33.

The legality of using a 25 kHz radio depends only on the channel you’re using and has nothing to do with what other radios are installed or not. There are still aircraft flying in northern Sweden without 8.33 boxes because they don’t fly in airspace where contact with ATS is compulsory. I’m sure some of them have KX170B’s

But, as RobertL18C points out, you are not allowed to do any new installs and if you’re upgrading the avionics then you’re supposed to remove them.


Unfortunately EASA no longer allows us to fit this great piece of avionics because it is non 8.33khz

I believe the NAV part is VFR only in Europe due to lack of FM immunity.


What does the test mode of the com radio do ?

Opens the squelch. You must be the only pilot in the world who hasn’t used one :)

Ah thanks ! I know the squelch

, but the meaning of “TEST” wasn’t obvious to me.

Jujupilote
LFPT, LFEH
20 Posts
This thread is locked. This means you can't add a response.
Sign in to add your message