Our 182RG is just back from prop strike/shock load.

Now experiencing much higher oil temperature. Only use of cowl flaps prevented it redlining. Our maintenance organisation are being hopeless. They tell me "its fine as long as its in the green" and "that's what cowl flaps are for".

Current suspicion is that an additional baffle panel has been missed in the port side air intake however we cant recall what this looked like previously.

I've loaded some photographs at

The one with the parts catalogue index numbers transposed is the most telling. It shows large gap between the oil cooler and starter motor. This appears to be the result of the starter motor being replaced with a lightweight unit which is both smaller and offset from the main starter drive shaft.

Are there were any other 182RG owners here who might be able to compare this with their own arrangement.

many thanks Andy Reid G-WIFE

Andy, you were not happy with the feedback you got on the CPA forum?

Why don't you just fabricate a small stainless steel sheet and rivet it onto the existing sheet to close the gap with the start motor? There shouldn't be any gaps there for sure and fabricating such sheets is standard practise for every A&P. I'd done that long time ago, that's a no brainer. If you want to be extra diligent, you rivet baffles onto your fabricated sheet and get a very good fit.

In warm weather, you cannot expect to fly your 182RG with the cowl flaps closed. However, the issue is cylinder temperature, not oil temperature usually. My oil temp (digital EDM) is always between 180-195°F.

However, I don't think that closing the gap will solve your problem (nethertheless, you should do it!). Have you removed your bypass valve and cleaned it?

One needs only a 5mm gap, say 100mm long, for a 10F-20F rise in CHT on the cylinder whose air is being thus bypassed.

That is a tiny gap - easily created by a badly fitting baffle plate.

I would definitely block that starter motor hole. That is a massive hole.

On the TB20, I see CHTs some 20-30F higher on the RHS (1,3,5) and this is obviously because the oil cooler is stealing some air from that side. The Israeli air force bought a load of TB20s many years ago and they had two oil coolers fitted and the result was that the engine ran hotter still!

Also do check the temp gauge, whatever type it is.

Finally, check the CHT probe(s) is not misplaced. I know of one pilot who used to fly a big piston twin who burnt tons of extra fuel, flying well ROP to keep the temps down, and years later he found the maintenance co. put one of the CHT probes in the wrong place...

I reworked my baffle seals recently - see here. Had to use two different seal materials - a "hard" one for the upper ones and a "floppy" one for the lower seals. The hard stuff came from MacFarlane and the floppy stuff came from Browns (via Aircraft Spruce). I've posted the details here previously.

Another thing, for a fuel injected engine (and maybe a carb engine too) is to adjust the mixture (on an injected engine, the sea level max fuel flow) at the top of the rich range. This gives you coolest CHTs for climb, but doesn't affect MPG because you still lean as usual for cruise. You can get a fuel servo adjusted for c. £250 (have to send it off).

Achima, lots of good general advice from CPA about how critical the baffles are and how good other people have been at sorting them (no offence Peter) but I already knew that. When I was told by my engineer that it was ok as long as it was in the green, I followed up with another question asking whether forum members agreed. The unanimous opinion was they did not.

The OAT at the time of the photo was taken was 19C although. Whilst that's pretty warm for this part of the world its all relative.

We cant for the life of us recall what this area looked like before the engine was removed for the shock load test. It does highlight that photographing the entire aircraft periodically can be very useful in the future.

What Im really trying to establish is what field type fabrication should have been installed after the starter motor was replaced with the smaller unit. I was told there was potentially one or two 182RG owners on this forum. I was hoping they might be able to share a photograph of their arrangement.

We've had a pretty bad experience with our existing maintainers/CAMO. We will be having all the baffles and seals checked and replaced as necessary asap but most likely elsewhere.

Thinking about this more... you should have a thermostatic valve that regulates the oil flow through the oil cooler.

This should produce a relatively constant oil temperature regardless of circumstances - unless things are so hot that the oil cooler can't cope and then the oil temp will rise, probably roughly tracking the CHT.

What are the CHTs? Do you have an EDM700 or similar?

The valve is adjustable and it may well have been put back misadjusted, or put back incorrectly.

Peter, we've currently got a GEM602, which only partially behaves (another maintenance story!). But on the cylinders that do work, CHTs appear to be normal.

Interesting point about the thermostatic valve. I had ruled that out as the oil cooler was hot after flight. Hadn't thought about the potential of partial opening.

It will be getting looked at by engineers next week so will see what that brings.

Yes, you should check the thermostatic bypass valve. It is on the left side of the cowling, top of the engine left of the leftmost cylinder. You can adjust it yourself. My engine was not making high enough oil temperature (you want more than 180F so that water boils) and I adjusted it until it was better. Turn CCW for cooler oil, CW for hotter oil. But before you do that, remove it and inspect for debris.

Attached find two pictures of my 1979 TR oil cooler setup. As you can see, there are no major gaps like in your picture. Any halfway competent mechanic should immediately start fabricating a stainless sheet and rivet it onto yours to cover the hole. The cooling requires airflow to be channeled, even small holes significantly harm the cooling process. 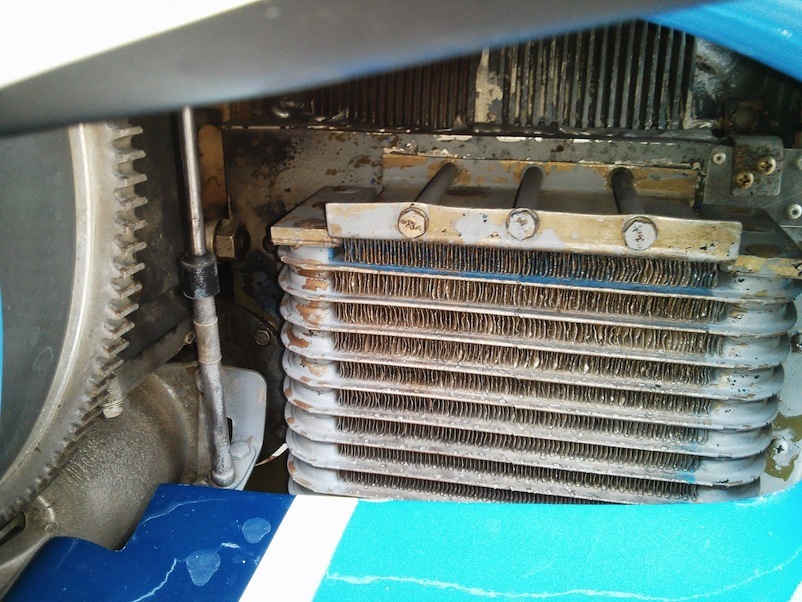 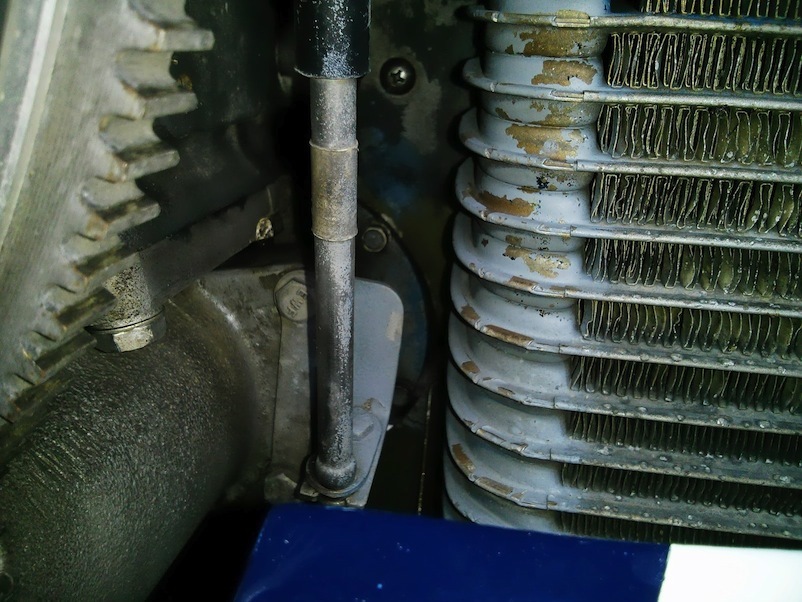 Two more things from your pictures: where it says #11 in the closeup of the starter, the sheet is cracked and loose. This is fairly normal for a 182RG but needs to be fixed by installing a doubler. It's something you do during the annual. I would also put RTV between the air duct sheets and the cylinder to reduce vibration which is the reason those sheets break (see the gray RTV on my picture).

Also the Cessna builtin gauges are not necessarily to be trusted after 30+ years. My CHT gauge shows something in the first third of the green arc when CHTs are at 400F. Disconnect the oil temp sensor and use a tester to check the calibration of the gauge (a certain mV should give a certain pointer position). Or even better: get an engine monitor with 6x CHT and 6x EGT + oil temp + oil pressure + rpm + mp. RPM is also considerably off on most of those old analog instruments. Who doesn't know a proud C172/PA28 owner claiming his 40 year old bird goes faster than the POH? That's because the tachometer underreads...

Last but not least, even if it sounds a bit harsh, find yourself a competent shop. An A&P that bills you hours of troubleshooting without doing the absolute obvious of closing massive gaps in the cooling airflow clearly does not understand the cooling concept of your aircraft. You don't gain anything by having him work on your aircraft.

Does your oil cooler contain the entire insect population of Germany, or does it just look like that, Achim?

That is a massive amount of damage.

Another possibility is that the oil temp gauge is simply duff. I would definitely fit a second oil temp probe; it's a cheap and easy mod.

I cannot immediately see if the GEM602 has an oil temp probe option but it does look like a close copy of the EDM700 and the oil temp option for that is always enabled, and is enabled by merely wiring up the probe.

On engine instrumentation you want two of each of the things that matter, otherwise it is brown trousers time every time a sensor etc packs up.

find yourself a competent shop

Welcome to the UK

Does your oil cooler contain the entire insect population of Germany, or does it just look like that, Achim? That is a massive amount of damage.

No, it's the debris from the birds that I shred with my propeller when I do 50ft AGL flying over the German national parks!

Those oil cooler fins tend to bend over time, especially in the 182RG where the oil cooler is very exposed to the air stream. Take a look at any random 30 year old aircraft. Oil coolers do not get replaced based on aesthetic criteria but when they are broken. Bent fins decrease the cooling capacity and when it gets too bad, one would go for a new oil cooler. Unfortunately the currently available oil coolers for the 182 RG are worse than the original.

At this point there is absolutely no reason to do anything about the oil cooler. The 182RG does not have problems with oil getting too hot usually. It's more the opposite, a lot of 182RGs fly with duct tape over one half of the oil cooler in winter. Keep in mind the O-540 in the 182RGs is flatrated to 2400 RPM, that's nothing for this engine.

Achima, thanks for the info - the photograph is exactly what Ive been looking for.

Don't know if there is such a thing as a competent maintenance shop, certainty not around our parts. However the escape committee is being formed :)

Gem602 only monitors EGT and CGT. We are in discussions with Harry M about a replacement.

140kias
Bigamy Rules
RAF Kirknewton
20 Posts
This thread is locked. This means you can't add a response.
Sign in to add your message