Hello, my #6 cyl exhibits the following problem:
It has gone cold on two recent flights during descent. Engine is running rough when it is going cold. See two attached engine monitor plots.
What has been done and excluded by the mechanic are the following items:
1 Check if valve is stuck. Negative.
2 Clogged fuel injector. It’s a GAMI. Was filthy but not clogged. Was cleaned.
3 Check plug. Bottom was dirty, but could be due to rich run ups. Should not lead to cylinder going dead.
4 Air blow spider and fuel lines.
5 Swap injector. Negative.
6 Swap temperature probe. Negative.
7 Check valve guide and spring. Somewhat worn, but should not lead to cyl going cold.
8 Compression 65/80. But may change after 45 min flight. Should not lead to cyl going cold.

Cyl #6 has 2100 hours on it, and has worked great every single time for the last 500 hours. Never any work performed. Plane regularly flown.

Can’t be magneto or ignition harness, since only one single cylinder affected.

After all these 8 points, still during run up at 1500 RPM cylinder still goes cold, but after engine warms up it stabilizes and is good to go according to engine monitor.

What else to check?
Safe to ferry flight? (Plane is not at my home airport with limited repair facilities) 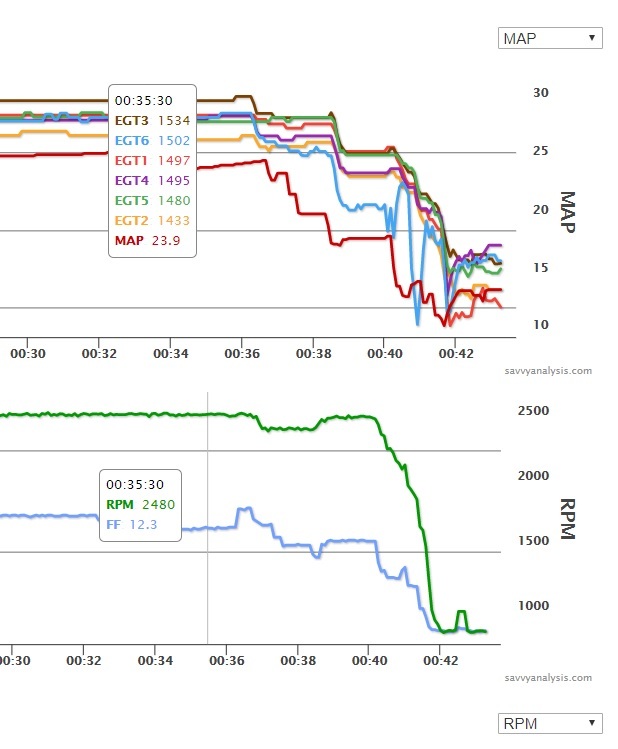 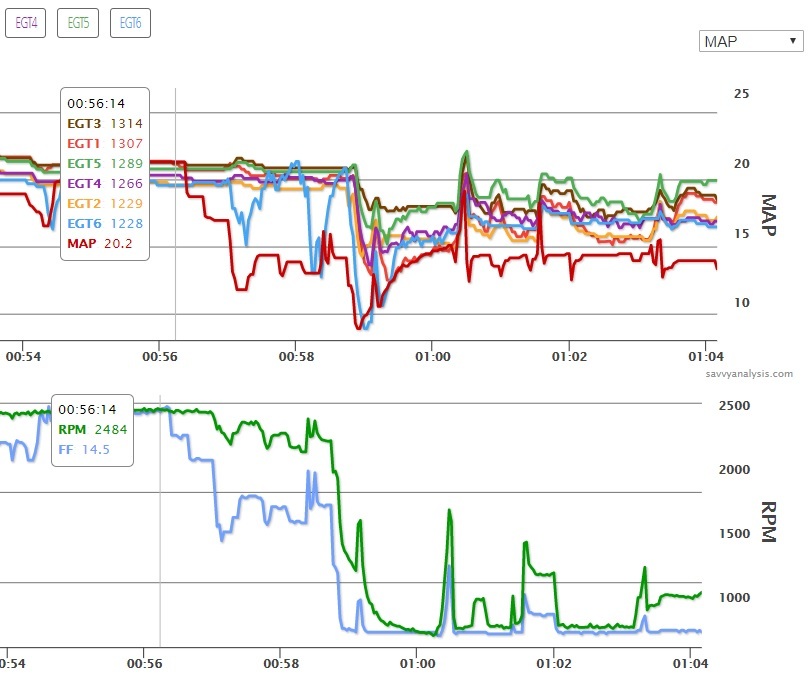 Random thought: what would be the consequence of an intake leak on that cylinder? Could it get less air when you throttle back, which in turn would cause it to be richer, too rich?

Kudos for keeping a cylinder for 2100 hours by the way. Sometime they just need to retire. My few remaining eCis have a 1200 TBS (Time Before Suicide)


Can’t be magneto or ignition harness, since only one single cylinder affected

There’s only one lead to each spark plug on that cylinder so it is possible for a harness fault to cause one cylinder to go “off” – while unlikely one fouled plug plus an ignition lead going faulty on the other plug could lead to no spark in that cylinder. If you know there’s fuel going in, and can rule out an induction leak or stuck valve the only thing left is a lack of spark.

Swap both the spark plugs with those from another cylinder and see if the fault moves.
If that doesn’t work I’d try replacing/swapping plug leads.

Clean the injector again , seldom does an injector line give up all its dirt the first time you clean it.

I was able to re-position my plane to my home airport. Same issue again during descent from about 2000 feet #6 goes cold (engine rough, so it is real, not a temp probe going bad). The engine monitor data now show something it didn’t show before, which is a zick-zack pattern with a regular 27 second periodicity. See blue line of EGT plot attached. The zick-zack pattern may suggest a burned exhaust valve, but in this case periodicity would be 60 seconds instead of 27 seconds. Also a burned valve would not lead a cylinder going cold and then coming back, unless there is an edge broken off and only high fuel flow is able to sustain ignition. Just thinking out loud. One possibility I was told is a hydraulic lifter collapse, due to sludge. Not sure how probable this is, but can’t find much info on the public internet. In either case, I am going to replace Cyl #6 and will find out. The mystery continues.

Clean the the injector line again, it’s a lot cheaper than changing a cylinder at this stage.

It has taken cleaning the injector four or five times before I have cleared the problem in the past, given that a very small bit of contamination to have a large effect on a cylinder and these small particles of contamination can hide in the system.

The exhaust valve would have to be quite badly burned to make the engine run rough in flight, and it would be extremely obvious on a compression test, not 65/80. You can also listen to where the air is escaping during a compression test to determine what’s leaking. I’d say it’s far too early to replace a cylinder – you may replace it and find you still have the problem when you put the new one on.

Thank you @alioth. I forgot to mention that the air escaped through the rings during the compression test. Induction leak is another possibility, but it also must be extreme to have the cylinder go cold due to induction leak (I believe). Also it would not appear during run up, then disappear after warm up, and then reappear on descent (kind of the symptoms of a stuck valve, which was eliminated as the culprit). The new EGT oscillations recorded can only happen by something happening periodically (every 27 seconds). I agree with the spirit of not replacing parts too early. The reason I am more inclined to replace cyl#6 is that it has 2100 hours on it now, air appears to leak through rings, springs appear worn. My goal is to get to >2500 hours on the engine before engine overhaul and replace cylinders on condition only, one by one, but also not wait too long before pulling the trigger. Even though more expensive, I consider replacing one cyl after another safer than a top overhaul. I do Blackstone oil analysis every other oil change for as long as I own the plane (6 years), so have a good history. For the first time, the following note appeared this July: “Aluminum, chrome, iron, have all increased quite a bit, showing more wear in the cylinder area. Do a borescope and compression test if it’s been awhile.”. I am not babying the engine. Always 75% power at a tiny bit LOP. Lycoming cylinders may be substantially better than Continental cylinders, but not so good as to last 2500 hours while constantly running hard. In this sense it won’t matter if I replace the cyl#6 now, or in two years from now. Yes, I want to avoid repairing something that is completely unnecessary, but given all the data and info it is hard to imagine that it would be anything else than cylinder related.
These are my thoughts. Not sure if this is a good approach. Feedback very welcome. Thank you!

LFHNflightstudent
LFHN - Bellegarde - Vouvray France
12 Posts
This thread is locked. This means you can't add a response.
Sign in to add your message

Cyl #3 and #4 show hottest CHT, too hot for my taste during climb
Pipistrel Panthera (combined thread)
IO-540 C4D5D (TB20) Fuel Pressure.
Need physical charts if you have GPS/app with them on?