Assuming a metal aircraft for sale is currently getting the ARC and thus all inspection panels are removed, I’d be interested in how to spot corrosion on the airframe and, using a boroscope, the engine.

I found some pre buy reports showing horrible findings on planes labeled „top condition“, with engines showing rust and water and some obvious damage and cracks to the airframe, but then there are subtle cues not so obvious.

Example pictures would be terrific.

The point of my thread is not to skip a pre buy, I just want to learn about these things in the process as well.

This provides lots of useful insights into this, not the best pictures but certainly gives an idea what and where to look.

Thank you!
Any personal recollections or pictures appreciated!

It depends, Aluminium in the airframe can corrode in a number of different ways.
So there is no one answer. 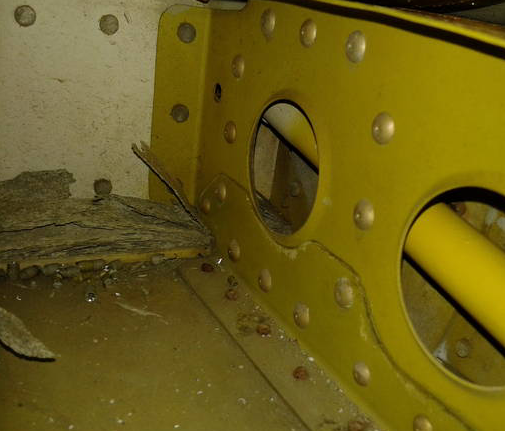 I have other photos, showing something similar on a TB wing spar, but can’t post them.

The above are known as exfoliation. The metal separates out into layers. It is believed to be caused by improper heat treatment / bad metal, but the manufacturer obviously denies that.

Similar thing as the picture above starting happening to my bike’s rim. I guess aluminium does that with time when exposed to the elements.


I guess aluminium does that

It really depends on the specific alloy. In what I do at work, we let it do this on purpose.

On purpose? Could you describe this in more detail, please?

Peter, the last time I saw corrosion like that in was under the toilets In the support structure ( seat rails ) on a Boeing 747.

I don’t think it is improper manufacturing of the metal, it’s usually found in areas with dissimilar metals and harsh environments hence the corrosion on airliners is usually found under the toilets and galleys.

Preventing this is a matter of treating the bare metal with alodine / alocrom then etch primer and top coat. The final part of the jigsaw is one of the anti corrosion compounds ACF 50, corosionX or the like. The Cessna SIDS document gives several approved compounds all I think would be satisfactory but I personally have had a lot of success with CorrosionX.

Saying “Corrosion” and “aluminum” is kind of like saying “trees” and “forest”, there are many different types, and some are more common in some species than others.

The exfoliation corrosion in Peter’s photo is common in forged/rolled high strength alloys, where a corrosive liquid can follow layered grain boundaries in from the edge. Anything you can do which prevents moisture affecting this type of aluminum will usually prevent the corrosion.

Pure aluminum is extremely corrosion resistant, and will not do that. It will gently surface corrode, but it’s harmless, and you won’t notice. It won’t get worse unless you really immerse the pure aluminum in horrible salts or acids for along period.

But, pure aluminum is also low strength, so has little value in aircraft structure. So the cunning aluminum mills clad high strength aluminum alloy sheet, with pure aluminum, and make “Alclad”. Alclad is great, unless you scratch or polish your way through the cladded pure aluminum, and then that area will be susceptible to surface corrosion forever. Note that cladding only works on rolled sheet, it cannot be applied to bar, or forging. And, if you machine through it, it may as well not have been there.

The flying boat (which are intended to spend lots of their life wet) I bought in England was zinc chromate primed through and through – which I knew when I bought it. Better than that, it was done right, with the parts being primed all over, before assembly. So, when I was drilling out a damaged frame from the keel, I was horrified to pull out white corrosion dust, where I should have been pulling out aluminum chips. Once I got the frame out, it turned out that it had been repaired there once before, and the repairer had shimmed the riveted joint. The shim had not been primed, and had corroded to dust. the two original (1975) primed mating surfaces were perfect, once cleaned up. I did reprime, just as I could while it was apart. I’ve been told that the Cessnas made in France were primed once assembled. Not so effective – water gets between the riveted surfaces, and corrodes in there.

Cessna is big on corrosion recently, and rightly so. They did not intend their legacy planes to last this long. I have seen 1970’s Cessna skins I could push my finger through. I was once working under the panel of a 1958 182, I put my elbow on the floor, and felt it go right through. I took up the carpet, and the pilot’s floor was junk. Similarly, other structure in the local area was badly corroded. Only on the pilot’s side. The “bulb angle” extruded aluminum stiffener riveted to the inside of the firewall was actually corroded right through. I wired it to a piece of wood, and kept it for reference. We attributed it to pilot’s wearing wet salty boots. I ended up replacing a lot of metal in that plane! (Then he crashed all that metal – and it survived! Then the next pilot crashed it again, and none of them did.).

Cessna 210’s have recently bee AD’d for wing spar defects, which have at their heart, corrosion. Noggin protecting foam was glued up under the spar = good idea for noggin, bad for spar. Then, there was no mention of recurring inspections for a few decades, while rain water ran into some cabins, and soaked into that foam – which held the water, and caused corrosion. Cessna quietly realized this, and issued a service letter to inspect a while back – some owners did. Now, following the loss of a wing in flight last year, it’s an AD. Interestingly, Cessna has commented the AD, saying that they did not install the foam at the factory (and it’s not a “part” in the parts catalog). However, the service letter says to remove it, inspect, and reinstall the foam! So, whomever at Cessna knew the foam was in all the 210’s! I discussed this with the FAA Engineer who wrote the AD a few weeks ago, the FAA will be discussing with Cessna what should be installed to comply with the service letter…

In the mean time, I have seen two older 210’s with corrosion on the critical area of the spar much worse than that which began the spar cracking which the Australian report shows. We replaced one spar (big job!), and I have kept the corroded one for further examination.

So yes, understand the corrosion you’re looking at. There are some tolerances for Cessnas in the SIDs for cleaning up corrosion, so a little is not fatal to the plane, but understanding what you’re looking at, and how much is there, is pretty important!

Pilot_DAR
Home runway, in central Ontario, Canada
25 Posts
This thread is locked. This means you can't add a response.
Sign in to add your message

What are you building/flying ?
Restoration of a 1983 Socata TB20 Trinidad
High EGT after cylinder replacement
What type of deice do airports use on the ramp or runways?