This is a good reference for standard aircraft hardware.

AN960 PD8L is an anodized 2024 AL (aluminum) flat washer to fit a #8 screw. Graphic and dimensions are provided.

LN9025 is I believe a DIN (German national) numbering system for flat washers, but there is an additional suffix required to describe the size. I’m guessing your old Bölkow parts book

is communicating that either an AN960 or LN9025 washer is acceptable.

I have tried sometimes to get some info on the German LN standard for aircraft hardware, but gave up each time

It really would be nice to have the standard and parts readily available as it is standard metric DIN parts, only with a higher standard for “failure” rate.

Except that the AN (Army / Navy) stuff isn’t metric, it is inch-based (imperial?) – as Silvaire explained above :) The DIN / LN probably is :)

FWIW, many, if not all, AN specs have been superceeded by a MIL spec:

AircraftSpruce have them all, I recently spent way too much money buying a mini spares collection.


AircraftSpruce have them all, I recently spent way too much money buying a mini spares collection.

I have spent tons of money on hardware from ACS

AN bolts are nice, but AN (MS) screws are complete junk compared with standard metric screws from good (professional) hardware stores. Poor quality heads, poor threads. If I had some place to get LN stuff at an obtainable price, I would, especially screws.

Do tell, are the metric LN screws really direct replacements for the imperial AN/MS screws? Genuine question, as I am sure I’ll be missing a size or three anyway, and getting stuff from Spruce takes time and too much money. Or are you able to use them because you’re building from scratch, and can use whatever you want?

They are different threads, although a monkey is well capable of forcing one into another with enough force

American GA aircraft screws (the small ones, especially) are coarser pitch than metric screws of same diameter. The top and bottom are M3 and M4 respectively while the middle one is a UNC (unified coarse) thread: 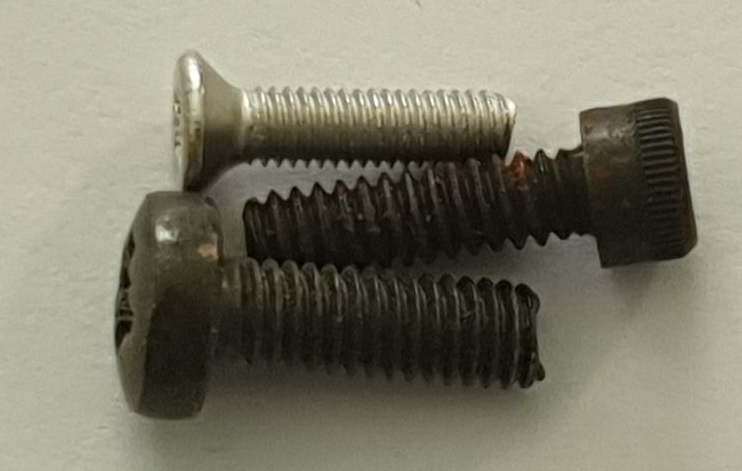 There is also UNF (unified fine) which is finer, and used for bigger bolts in US aircraft. Upper is M6 and the lower is UNF 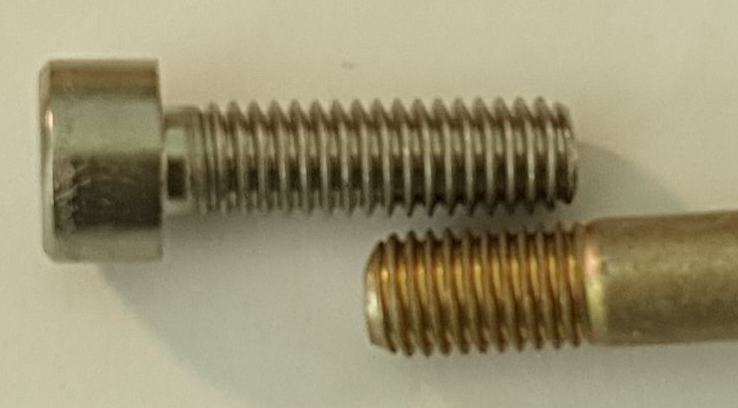 I wouldn’t say the US fasteners are of worse quality. It depends on which ones you buy. I have a box full of precision standard aircraft bolts…

Spruce has a German distributor called Sandelving, trading/as Aircraft Spruce EU, but there have been reports of extremely slow deliveries recently. I phoned them up to check out certain stories which they flatly denied…

The AN/MS system is wonderful for controlling pricing of aircraft fasteners and preventing ripoffs like this where a fairly ordinary M4 screw is sold for 100x more than the right price. BTW I still have stock of them

Europe failed to create a system of “standard aircraft fasteners” and this enables these practices to continue – especially in aviation where most owners are bent over the barrel of their maintenance company which demands “paperwork”.

Don’t get me started on fasteners. Everything on mine is Whitworth, except the engine and brakes which are all AN/MS, and all the fuel pipes are BSPP except where it finally connects to the engine… fortunately, LAS seem to stock a tonne of Whitworth hardware, and BSPP/BSPT is still widely used on the hydraulics on things like tractors.

Aaaah Whitworth. What about BSF (British Standard Fine)? Beautiful fine threads. The days when engineers were men, had oily hands, and life was real

Yes LAS Aero is a good source for fasteners although they keep a limited range, and very little metric (predictably since there are no “standard” parts).

Do tell, are the metric LN screws really direct replacements for the imperial AN/MS screws? Genuine question, as I am sure I’ll be missing a size or three anyway, and getting stuff from Spruce takes time and too much money. Or are you able to use them because you’re building from scratch, and can use whatever you want?

As Peter said. For bolts you can use “whatever you want” but AN bolts are OK anyway, and I have found no place to get LN bolts. Lots of ULs use LN bolts, or DIN NL or whatever it is called, in critical places like wing bolts for instance, but where do they get them?

For most screws you have to make the threads anyway, or use nutplates. These things are usually not part of any critical structure, and if they are, they are usually used as a, more practical, substitute for rivets. Any steel screw is (much) stronger than a rivet regardless. In those cases I would rather use metric screws.

LeSving
ENVA ENOP ENMO, Norway
24 Posts
This thread is locked. This means you can't add a response.
Sign in to add your message

Is "base leg" the same as "cleared for the ILS"?
Glidepath on 2D approaches
Mandatory PBN training (merged)
So much bad terminology...