FAA has issued an AD for gazillions of Cessnas to inspect and repair (if needed) strut attachments. https://www.avweb.com/aviation-news/ad-affects-thousands-of-cessna-singles/ . How quickly does this take effect in EASA-land? Does EASA have to issue it as well or is it automatically applicable?

EASA, as a policy validates ADs by foreign “state of design”, unless it has specific reason not to, so this is highly likely to become mandatory in EASA-land.

I have done a lot of research on this topic, and a test installation. A client is considering making an alternate means of compliance kit for this. It’s not as easy as you’d think to make this problem better. The 182 airframe which I used to test install the Cessna kit (a 182Q with 3300 hours TTSN) turned out to actually have the cracks in the underfloor bulkhead! This has been a known defect with this group of Cessnas for a long time (note the original service letter date). A 182RG I picked up for a friend in California seven years ago already had the Cessna kit installed (my friend was very relieved when I confirmed this a couple of months ago).

This is a worthy concern for this group of planes. This is about cracks in the bulkhead to which the wingstruts attach! I spoke the the FAA Engineer who is in charge of this AD. She told me that one 182 reported to the FAA, with less than 2000 hours, was found to be cracked. She attributed the defect to the plane being tied down it’s whole life, sitting in the strong winds of Wyoming. The wind rocked the wings while the landing gear resisted the motion through the fuselage. I hadn’t though of that, but it makes sense. So, depending upon how the plane is “put away”, it’s not just an hours in service thing, it could be calendar time too.

Any float equipped Cessna will be less a concern, as they have either a “V” brace, or bracing wires to carry the diagonal loads which are causing this strain on the airframe. But if the cracks are there, the kit must be installed. Inspection of the affected area of the bulkhead is difficult. You can get an endoscope camera down in there, though the fuel line will probably be in your way for a good view, and the subject area must be cleaned for the inspection, which is really difficult to access for cleaning. I think that the $200 cost to inspect is too low an estimate. You’ll have an hour just getting the interior removed enough to inspect. Cleaning will be required, and possibly moving the fuel line for a good view.

If you’re contemplating the installation of the kit, draw everything out on the airplane floor before you cut anything. The kit I went to install (first on a flying 182Q) had fit inconsistencies, which were going to create a problem. At the least, I would have had to take up parts of the seat tracks, and then fabricate shims for reinstallation, which were not in the plans. So I did the trial installation on a non flying 182 for the practice. Note that there are steel hi lock rivets (with the red swaged aluminum collars) which must be removed to install the kit. The red collars must be split off with a chisel (working up in there) without damaging the underlying structure. This is something which should be practiced on non critical airframe first. I found a special way to sharpen a tiny center punch to chisel the collars off, and was able to do them all successfully.

Yes, this is going to affect the value of some Cessnas, but it’s not new. Anyone complying with the Service Letters or SIDs already knows about this, just now it’s an AD, so it’s not only a good idea, but required. Though my C 150M is not affected, I was nervous enough about aging airplane issues that during the annual inspection last summer, I removed the wingstruts, and cleaned and inspected everything in that area.

Will it affect Reims Cessnas ?
I think of the 8 172s of my club which have been outside since forever

And they won’t be worth anything.

Private owners who have their Cessnas hangared must be quite unhappy too. That´s a huge expense.

Well, AFAIK, so far it is not an established fact that being hangared outside vs. inside makes a crucial difference. Although it might make some sense.

Pretty sure it will also affect the Reims-built versions. They are built the same, after all.

In fact, it lists even the Reims models (including the rocket).
Interesting that the earlier models aren’t affected : 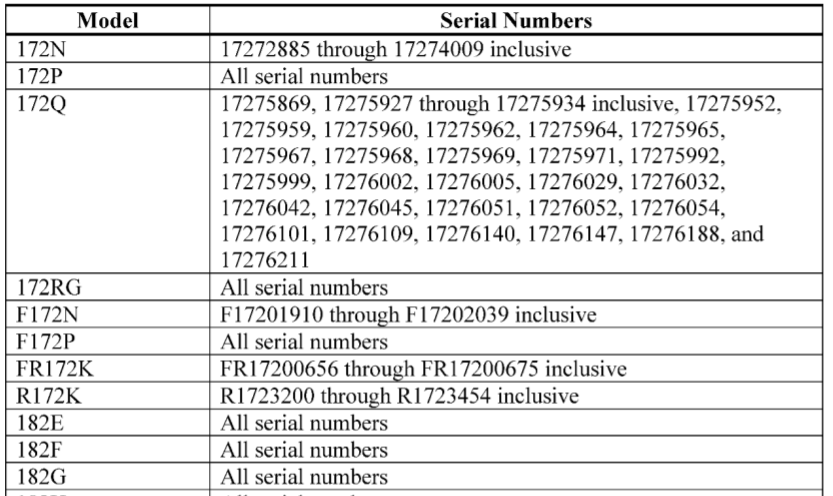 The full AD is here.

210s: only the very early models are affected. Later ones are obviously not, since they don‘t have struts.

Yes; flying clubs might be hit hard as they are operating many hundreds of Ns and Ps in Europe. They are often worth not much more than 50k. But the questions will be: how many of them will really require a repair/kit?

Yes, the earlier 172’s, and 182’s have fuselages more like the 180/185, which are not affected, the structure is different. Though being parked outside may be a factor, it is not the only factor, the damage concern is based upon a strain on the fuselage due to cyclical loading, which may be from taxiing, sitting in the wind, or flying. Interestingly, the flying part itself is probably less a concern, as the fuselage is not being subjected to opposing loads between the wings and landing gear – essentially, the floor happily follows the ceiling around. It is the opposing forces between floor and ceiling which are creating the strain.

It’s just an aging airplane thing. Though these planes may last forever, they need maintenance to get there….

Also the later models (R/S) are not affected. But this may be due to lower age rather than a different design.

Airborne_Again
ESKC (Uppsala/Sundbro), Sweden
16 Posts
This thread is locked. This means you can't add a response.
Sign in to add your message