I completely lucked through a rather alarming event with a C182 project I'm flying these days. It includes a complete redo of the entire panel, with an STC'd JPI EDM930 among other avionics. This instrument includes primary (and only) fuel quantity indication, and fuel flow and totalizer information. It is brand new, installed in the aircraft by STC, and was programed correctly by an experience AME, in my presence.

I taxiied the plane for fuel, with about 3/8 fuel quantity indicating in each tank, which seemed about right for the flying I had previously done. No one else flies or runs the plane. I planned three hours of flying, so I specified 170 liters total between the two tanks, which was fuelled. The fuel as found was to be my reserve. (the nature of the flying did not permit a "fill r up"). After this fuelling, the qty indicated full on both tanks, and I thought to myself, I had goofed, and ordered too much fuel.

And no, before you correctly and wisely ask, I did not dip the tanks. It's a brand new fuel quantity indicating system, STC installed into that plane 33 flying hours ago, which had been checked, and appeared to be operating properly.

I did my three hours of flight testing, and landed "safely" - I found out the next day, I had landed on fumes. It was independently confirmed that I had 3/8 tanks indicating before I fuelled, and again as I landed following the three hours of flying. So how could I have been on fumes?

The plane was then fuelled with 293 liters, with a uselable quantity of 284, and a total capacity of 302. That pucker factor went waaaay up! What had happened?

So, with confirmed full fuel, I flew again. I watched the EDM930 very carefully. I saw wandering fuel quantity information during the flight, but nothing wildly out of what should be normal for the first hour. But as the flight went along, I saw this: 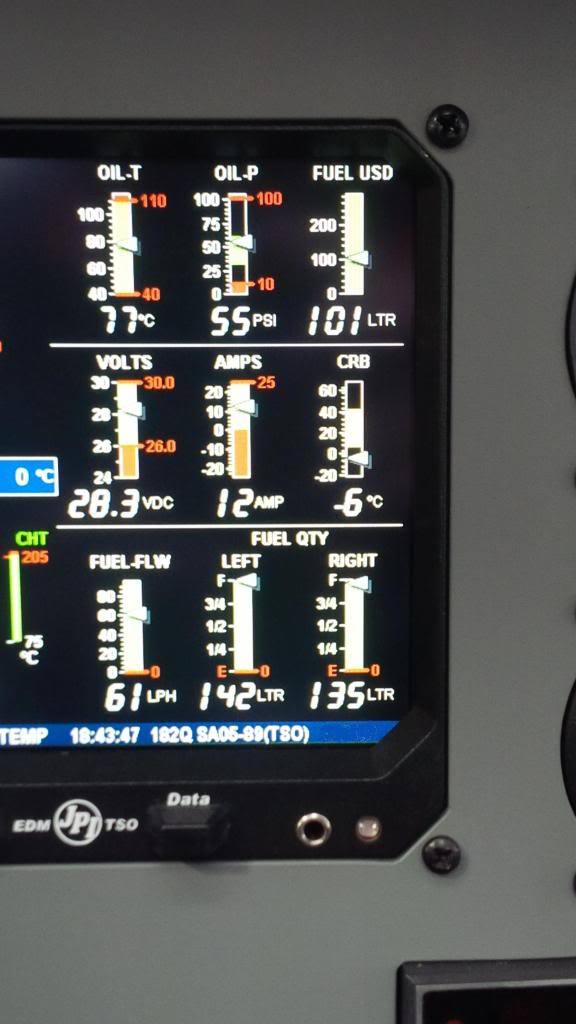 So the useable that instrument should indicate would total to 284L. According to the certification rules, the unuseable fuel should not indicate in level flight. (When the useable fuel is exhausted, the quantity should read zero).

In the photo, it can be seen that the quantity indicators think the plane is carrying (142+135) = 277 liters - but I am 1.7 hours into my flight, and the totalizer is saying that I have burned 101 Liters so far. That totals to 378 liters, or 94 liters more than the useable amount, or 75 liters more than the absolute capacity of the tanks. The EDM930 is way out.

So I'm getting a dipstick. I'm also drafting a report to support a complaint to JPI, and I'll be filing an SDR. I'm thinking that a $6000 engine instrument, newly STC installed should be more accurate than this, or else come with a huge disclaimer. It is a certainty that accuracy like this does not meet the requirements for certification - which it has.

But, at the very least, one would think that this wizard instrument, which is factory programmed for this aircraft, would sum the fuel it reports is aboard, and the fuel it reports as burned, at pop up a red flag if it thinks the sum of those exceeds the total capacity of the aircraft (or, more properly, the total useable fuel).

So, I am again a little wiser, and feeling rather stupid, which is not the first time. I have flown with suspect fuel quantity indication in other aircraft, but at least the indication led you to be suspect, and then I did check and dip. I guess we don't even trust the most expensive fuel indicators available for this plane! I got it wrong, and nearly very wrong - learn here from my mistake...

Wow - reminds me of an episode twenty years ago when I landed my 337 in Spa, Belgium and the rear engine starved during taxi. We used to go there for cheap fuel... never again..

Excuse my stupid question but do you have "fuel pressure" installed with the 930 (a 1500$ option on top of the mentioned $6,000)? We goofed several times with the secondary (primary engine monitor installation wasn't allowed) fuel indication in our 182T when we installed an EDM830. In this installation accuracy very much depends on what we or the fuel guy deems to be "full tanks" and we need to set the EDM accordingly. Otherwise I'm very happy with the fuel data the EDM gives me. The error factor in our case is purely human

I tried to work out "the problem" from the photo without reading the explanation below it, and after a long while did manage it... 142+135+101 is way more than 302, never mind 284 which is the max the three should add up to.

Isn't this a purely-totaliser product i.e. no fuel quantity sensing? If so, you have to set the FOB manually, and the settable FOB should limit at the max usable fuel. If it doesn't, you will get what you get... My Shadin can be set to 86 USG and no more, but I could change that via a factory config menu and make it settable to say 200 USG.

But yours indicates the two fuel tanks separately, so either there must be two FOBs to set, or it does have fuel quantity sensing. I think there is something much more basic that's wrong however because the two fuel tank values are still sitting at nearly max usable fuel (142+135=277L).

You must either have two capacitive fuel quantity sensors, plus a totaliser (turbine flow sensor) or you must have to set the FOB for each tank separately.

Incidentally this is one reason why I always full the tanks all the way to the rim (and set 86 USG) because it eliminates the possibility of getting short-changed by a dodgy bowser/pump meter.

In my opinion, the designer of the software, should have added an internal crosscheck, to prevent what has happened to me. Simply, does the sum of FOB and fuel burned exceed the programmed total possible. If so, annunciate something!

the designer of the software, should have added an internal crosscheck, to prevent what has happened to me. Simply, does the sum of FOB and fuel burned exceed the programmed total possible. If so, annunciate something!

I think there is a major cockup somewhere because this situation should never arise in the first place.

You could burn off 100 litres and so long as the total of the three comes to less than the max usable, the device will still not realise there is a problem. This is no good at all.

From your photo, they are not updating the fuel quantity figures during the flight, but the fuel totaliser is showing the fuel burnt.

How is the fuel on board (FOB) for the fuel totaliser portion of this system initialised?

With a pure flow totaliser (Shadin, etc) you load the figure manually after a fillup.

Is there maybe a problem with tank sensor hookup to the device?

I can’t see an FOB driven by the totaliser, just tank quantities. On the Mirage which has poor tank gauges, I would trust the totaliser (having carefully tested it) but never the tank quantities. Crossing from Greenland to the Faroes, the tank amounts showed we were going to run out of fuel whereas we knew the exact amount at take off and the amount consumed (which was correct).

Does this rely on the original Cessna sensors?

I find the psychology of this very interesting. The JPI instrument shows the fuel gauges the same way as the totalizer, and OMITS the totalizer-derived FOB figure. This supports the perception that the precision of the fuel on board is much higher that it is in reality, and made you rely much more on these than if the original fuel gauges where still installed. Would you have done so if you had the old 20 year old dials installed, or would you have been more wary of their indications?

I am completely with Jason here. If that were my instrument, I would have it programmed to show the fuel remaining from the totalizer prominently displayed.

Of course you appear to have a sensor problem as well, but my point is – the most precise instrument for FOB is the totalizer result (assuming correct entry of uplift), why on earth is that not shown? This is the real issue here.

This for example, is how the Avidyne present that same info.

There is an engine page where the tank amounts are added but that is seen as secondary information. Hence as you can see the only number in the summary is the totaliser-derived one.

JasonC
EGTK Oxford
10 Posts
This thread is locked. This means you can't add a response.
Sign in to add your message