continuing on from another post. could anyone give ne an idea of the costs of fitting led lighting particuly the landing light and beacon on a cessna 150/172. the maintenance guys say its not cost effective

Of course it is not cost effective if all you want to do is keep your aircraft airworthy.

However, there are several benefits to LED lights. First of all, they are more durable. The typical GE light bulbs do not last very long due to vibration. The current draw is also a lot less with LED lights. The benefit of the two is that you can keep the light on at all times and improve safety by being spotted more easily enroute. In addition to that, good LEDs are much brighter than the GE light bulbs.

HID lights are even stronger than LEDs but they cost a lot more and they are not a simple light bulb swap and involve installing several components.

The best LEDs with PMA approval are by far the Teledyne Alphabeams. I recommend against the Whelen, they are much older designs with less light output. And don't believe the Whelen propaganda saying that the Alphabeams are only bright the first few minutes. This is because they test them "dry" on the bench and the Alphabeams have temperature sensors and automatically reduce brightness when getting too hot. In flight there is cooling airflow and their metal case is screwed to the airframe to dissipate heat. One Alphabeam costs about $285. One of the best investments I made so far, very well engineered.

and one of these for the Teal: http://www.rigidindustries.com/product-p/eseries6.htm

I will approve the R+ light in the 150, and expect to also do so in a few other upcoming aircraft projects, if I'm happy with it.

I test flew a light like the R+ on an EC-120 helicopter a few years back, and was very impressed.

Rigid appear to be the best you can get today in LED landing/taxi lights. However, they do not have PMA approval so far.

While at it Pilot DAR, also approve them for the FAA and EASA please

This is really interesting, especially the R+.

I would like to find LED lamps to replace my taxi and landing lamps, but I would like ones which are really powerful and draw as much current as possible so the cockpit indicators work correctly

There is a possible mod to fit a second light cluster on the RH wingtip, but a friend who has done in an on N-reg TB10 spent $5000 on the paperwork... He lent me his paper package but back then I didn't know what to do with it. Currently, on a TB, you cannot really turn right on an unlit taxiway at night.

Peter, and Achim, I invite you to familiarize yourselves with the respective FAA and EASA major vs minor modification criteria. It is well defined in Canada, and the "data' one needs to do a minor mod, vs a major, is less burdensome. If you can figure out exactly what data you need, for what I presume must be a minor mod for you too, we'll see what we can work out. I have already reconciled an LED landing light into a Canadian Cessna Cardinal as a minor mod, and everyone seemed happy.

My second R+ LED landing light candidate is a highly modified 182 headed for EASA land, so I'll find out what EASA thinks of these at some point!

AFAIK, PilotDAR, nobody "reasonable" in FAA-land thinks these are anything other than a Minor mod.

Parts which are non-TSO and non-PMA are obviously a no-no officially; one would need a US DER or a Canadian DAR (you) to generate the Approved Data AIUI

What might concern me a little, if I was to be retentive about it, is the loss of the instrument panel indicator functionality, due to the reduced current.

I tried to find out from Socata the threshold current of the relays they use but as usual was totally unsuccessful. One would have to do a measurement with a variable load. But I am not aware of any LED lamp of that style which draws anywhere near the 4A (at 28V).

Perhaps you could get the manufacturer to fund an STC?

One problem with using a non-EASA STC as the basis for an EASA one, AIUI, is that - unlike the FAA which accepts applications from aircraft owners - EASA accepts applications only from the US STC holders, and obviously most of them don't bother to play ball if they think the market is too small. 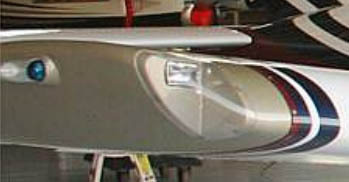 which have a "conspicuity" lamp in them. It should be an easy mod to install high power LED lamps in these. When I was doing my EHSI project, the FAA inspector thought it would be a straightforward field approval, but then he retired... This would be an easier route than duplicating the LH cluster in the RH wing which, while obviously trivial mechanically and structurally (it's a mirror image of the LH one) turned out to be a huge job for the one man who did it.

Unfortunately the wingtips are about $8000 (2) from Socata.

As I said in the other post I fitted the STC kit of taxi light and landing lights for the PA46. Cost about $3k all in the bulk being for the landing lights on each side. Didn't see the point in doing any others but am looking at the interior bulbs.

Re using the draw of the landing lights to check the charging system; turning on the pitot heat will give enough draw to ensure the alternator will pick up the load.

My experience with led lights has been extremely favorable. The very white even bright beam is much better then the pale yellow light you get from a crap 4509 bulb. The 5000 hr + MTBF also ensures you will never have to buy another landing light.

For me the most important reason to switch to a led landing lamp was safety. I was fed up replacing blown bulbs but with the life of a led lamp we now leave the landing light on as standard to make sure we are more visible - day or night. The reduced power consumption is a bonus.

Peter Mundy
EHLE / Lelystad, Netherlands, Netherlands
189 Posts
This thread is locked. This means you can't add a response.
Sign in to add your message