At the moment I’m looking into a few upgrades for the DR400.

1 Garmin G500 with the associated Garmin GTN series and transponder.

I have already got the support of the UK agent for one of the big American lighting company’s for the LED external lights.

The G500 is a bit of a dogs dinner as Gramin have yet to put the DR400 on the EASA STC, if I could find a few more people who want this fitted to the DR400 to put a bit of pressure on Garmin to do the DR400 STC sooner rather than later it would help.

The fuel & engine management is the most interesting and complicated but I don’t see why it can’t be done with come of the upmarket products from the likes of JPI.

If any of this is of interest to you please drop me a line, especially those of you who have an interest in the G500, once Garmin get wind of people wishing to part with money for their kit they will move on the EASA STC for the DR400.

If you are interested then please drop me an email,to see if we have enough potential customers to bring the unit cost of the certification down to an affordable level.

I am picking up this topic because we’ve had various “Robin avionics” threads over the years, showing the owners’ frustration with the lack of EASA STCs (this being largely due to a lack of FAA TCs and thus a lack of FAA STCs to base them on) and the difficulty in getting STCs developed due to a reported unwillingness of owners to form a group to fund any STC.

One thread is here and that is about the Garmin GFC500 autopilot.

In a surprise move, Avidyne have obtained an EASA STC for the Robins for their IFD boxes.

According to here the GTN can be installed as a Minor mod, and you get more than just VFR, but you don’t get RNAV1/PRNAV or LPV.

Aspen products need an STC even for VFR, I am advised (can’t find a reference right now).

However there are some interesting data points from France. One pilot there informs me that he has flown in a Robin which had a G500, GTN and did LPV, and that was a factory installation. And one of those used to live in “my” hangar – a brand new diesel one. Apparently Robin will retrofit the G500 and charge €50k for that… The also reported having flown an old Robin with a GTN which was “fully IFR”. Some of these may have been done by the factory (they can do most things under their TC and probably have a collection of approvals), or under some DGAC approval which may be hard to locate, or “off the books” like so many GNS installs were done all over the place. 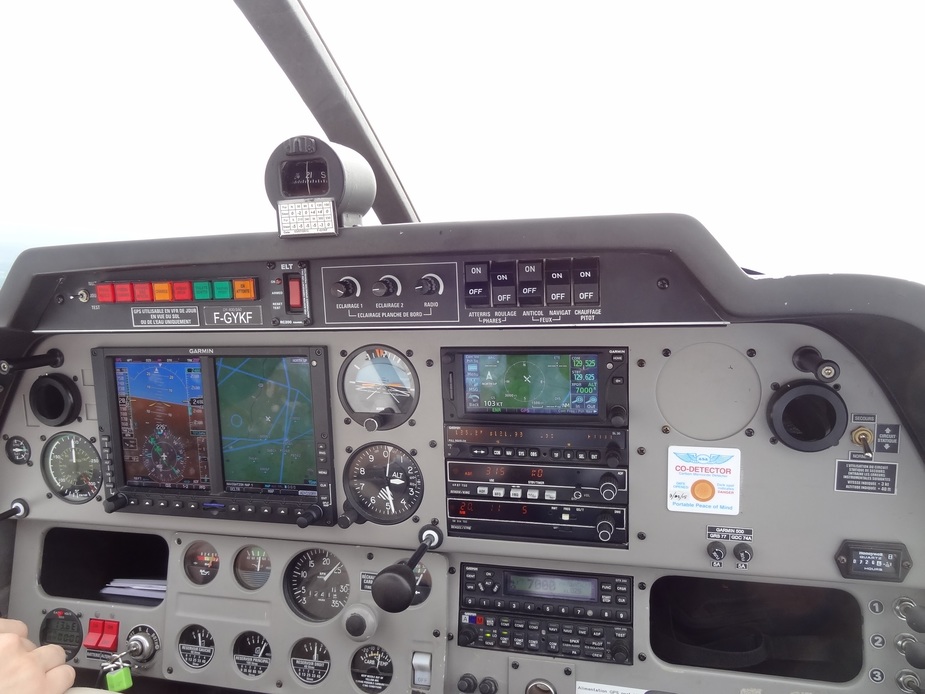 I know Robin refurbished a few like this one and the G500/GTN650 has been an option for new models for some time now.
The second is a 1978 DR400-180. It was so old the wing 40 liters tanks had been added long after delivery (it has been a standard for many years now). It is also legal for IFR but with a far less popular panel : (me doing my first IFR flight with an IRI, FL90 to LFRD

Its suite is very awkward : 2 AI and altimeters, GTN650, Bendix DME, transponder, an ADF from a brand that don’t exist anymore…
Probably, a long time IFR Robin, which got upgraded along the years….
Sorry, at the time, I was too naive to ask for maintenance regimes

Those look like they were factory installs, or 3rd party installs with the paperwork (STC or TC-approval-based) bought from the factory.

I’ve come across this post which might be a useful data point. I don’t know the “German company” which wanted 1k for the use of their approval but it could be Straubing, and more recently Airplus at Friedrichshafen became known to be associated with some Robin STC work (not known whether they ever finished it).

Airplus have done the EASA STC for the Avidyne IFD in the Robin.

Indeed; that was mentioned in the link in my post above. Did they ever do an STC for the Aspen EFD or a GTN? Aspen were evidently supporting a Robin STC in 2016 – here and I believe the DOA mentioned there was Airplus.

Views on DA40
Jodel D120 IFR?
Considering aircraft purchase - finally ;-)
Funding STCs by getting a number of owners together