It displays traffic allright, and the traffic appears to be correctly displayed judging from its trajectories which are plausible (i.e. straight in most cases) even if I cannot find most of it visually

But I had an interesting case last night, coming down into the circuit from 5000ft, where specific arriving traffic below me was depicted again plausibly, but I could not see it no matter how hard I looked in the general direction, and it made me wonder if the azimuth is at all accurate for traffic located within a cone above and a cone below.

It seems intuitively obvious that the system will have a harder time resolving the azimuth, for targets in those two cones, due to the unfavourable geometry but perhaps more so due to the airframe shielding of one antenna or the other.

It would thus seem that for targets which are above/below but very close laterally, the best avoiding action would be a change of altitude.

It would thus seem that for targets which are above/below but very close laterally, the best avoiding action would be a change of altitude.

This is exactly what TCAS RAs (RA: Resolution Alert) do: They tell you to either climb or descend, never to move laterally. Also because it takes much longer to turn then to climb or descend a couple of hundred feet! When you avoid traffic by moving vertically, never change altitude by more than 200 or 300 feet, otherwise you may trigger a sequence of TCAS alerts above or below you! TCAS manoeuvers are not flown aggressively, but very gently instead - we spend a lot of time practising that in the sim every year.

And you are right about azimuth: I estimate, that the resolution/precision is not better than 20 degrees. One can best see it on the ILS, when the traffic in front is shown displaced to the side, sometimes as much as 30 degees.

It is also very important to select a useful range for the display. In the traffic pattern, I would not display more than 5 miles, on an ILS maybe 10. Otherwise the display gets cluttered and more distracting than useful.

what next
EDDS - Stuttgart
Peter
03

One can best see it on the ILS, when the traffic in front is shown displaced to the side, sometimes as much as 30 degees.

That would also make sense; azimuth directly forward or directly back should be "poor" because the left/right resolution is done by the twin-blade antenna and again the geometry is not in your favour there.

My experience is exactly the same as "what next". TCAS is very useful but not a panacea.

On a different subject I like EGPWS a lot, but that is even more expensive.

And don't we all have TAS, although at low level it's close to IAS :)

On a different subject I like EGPWS a lot, but that is even more expensive.

I don't see much difference between the certified systems, and the TAWS function in a late-model Garmin handheld. I have that in a G496 and it's pretty good.

Some TB20s have the Honeywell GPWS system which reportedly cost them about £25k, but there is no evidence it does anything better than these sub-£1000 handhelds.

I have the whole Honeywell IHAS package and find the integrated EGPWS and TAWS to be great but they are expensive options and I doubt I would retrofit.

I also have a radar altimeter which is surprisingly useful.

The accuracy of the TAWS is very good although I will now test it on vertical traffic.

I can now confirm that the system was working all along, but the issue is more subtle. 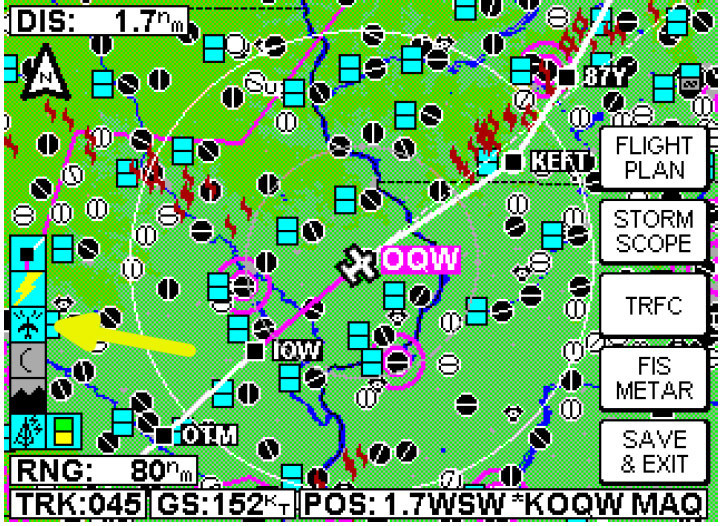 is hollow when TCAS is installed and the KMD550 is configured to recognise the KAC-504 TCAS interface.

If you do that, you see traffic displayed in the TRFC screen but it won't be overlaid on the map.

To get traffic overlaid on the map, you have to go to the MAP page, press the OVLY button, and press the button next to the TRFC caption.

Now the aeroplane symbol is filled-in (solid), and it works

You flew all the way to Wisconsin in your TB20 to get the above picture?

IOW is the Isle of Wight

Peter
Administrator
Shoreham EGKA, United Kingdom
9 Posts
This thread is locked. This means you can't add a response.
Sign in to add your message