I am preparing to re-do the RHS of my instrument panel (with a 2nd EHSI, to make a "pilot panel") and in the process would like to replace the existing Shadin Microflo, which is an unusual factory fit for the TB20GT and actually is the TBM700 version 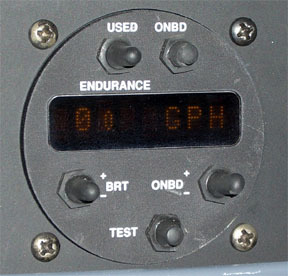 with the Shadin Digidata whose larger size would be just right to fill the hole left behind once the KI229 RMI in the LH panel is removed.

The exact P/N of my existing one is a bit of a mystery, with some info I was able to extract from Shadin being at the start of here. I think Shadin stopped making it even before Socata started installing them

Anyway, my existing one works perfectly. It sends an RS232 feed (current flow and fuel remaining, AFAIK) to the KLN94 GPS which then displays the FOB at the flight planned destination, and this works even if I am currently flying a DCT to one of the intermediate waypoints in the flight plan.

However, the later Microflo-L, and the Digidata, have a rotary switch which can be used to make the display show that info (the Landing FOB) on the instrument itself. Obviously, for this to work, the instrument gets the GPS flight plan data (specifically the ETE) from the GPS, and this is RS232 also. So you have the stuff going both ways, and both the instrument and the GPS can show the LFOB.

However, Shadin tell me that the Digidata will show the FOB at the next waypoint if one is flying a DCT to it. This is not particularly useful, and I suspect it is wrong (because I don't think the KLN94 transmits that info in its output stream) but I have not been able to extract any more info from them.

I am 99% sure that if I put in the Digidata, the KLN94 will work as before and always show the LFOB at the final waypoint, which is the main thing. But I also don't want the Digidata itself to indicate something stupid. A lot of avionics refits do display stupid/confusing data here and there...

Is anybody here familiar with the Digidata interfacing to the KLN94?

The other use of the Digidata, being an "air data computer", is that it will feed stuff like TAS to the KLN94 and the KLN94 will then display the actual wind. Not on the map display (like Garmins do) but in one of the aux pages. I have never felt the need for knowing these things (what matters in flying is the LFOB, and sometimes the ETA) but I need to fill the hole in the panel with something useful

I'm not sure why you want to replace a seemingly perfectly working fuel flow computer....but if you are looking to fill the hole left by the RMI, why don't you move your backup AI to the LHS....to put it in reasonable scan range in the event you ever need it? AQ

One could argue that one both ways.

If flying solo, it's better to have the backup AI on the LHS, preferably next to the main one. I have seen that done, too.

But if the objective is to create a "RH pilot" panel then the 2nd AI needs to be on the RHS. And that is what I want to do. TBH it's probably easier to fly with the TC (classical partial panel) than by looking across at the AI on the RHS.

Good point about FOB. I have a JPI EDM 830 connected to a GNS430W so I should have this information as well. I have never looked at it, will do that during the next flight. My aircraft has an endurance of 7h and I live in the geographical center of Europe which means I very rarely need that information

The Fuel OB comes from the fuel instrument.
The Fuel Req comes from the GPS (current flow rate x ETE).
The Ldg Fuel OB is calculated by the GPS, every second or so.

To me, it's the most important parameter to watch on a flight. The airspeed doesn't matter; you are going to sit there until you get there.

On the above pic, on the flight from Brac LDSB to Samos LGSM, it reckoned (with 29nm to run to TIBRI i.e. about 1/4 of the way down) that I would land with 43USG, and IIRC I did within some very close figure.

I would not do serious flying without a system like this.

I would not do serious flying without a system like this.

Not necessarily, I think most pilots wouldn't need it. If your airplane's endurance is higher than your personal endurance (not everybody likes to pee in bottles) and you don't go to places without fuel, it's hardly a concern. For 90% of my flying I fill up the tank before departure and I know that I will get AVGAS at the destination. 7h is more than enough no matter what happens so that's about all the fuel planning I need.

Having said that, I am about to go on a trip where this information will be critical so time to get familiar with the GNS430's interface

My EDM 830 gives me a lot of information such as FF and FOB down to the liter. It can also display LFOB (it gets the flight plan + speed from the GNS430) but one can only have a limited number of parameters displayed on the screen at the same time.

Achima, that fuel flow and GS looks very M20T like...is that what you fly? AQ

Does a Mooney have cabin space for two GNS430?

If your airplane's endurance is higher than your personal endurance (not everybody likes to pee in bottles) and you don't go to places without fuel, it's hardly a concern

I have never understood that.

OK, some people won't pee into bottles, but then they are wasting their time getting a PPL, frankly.

Because no matter how big your bladder is (my office manageress says she once managed 1 litre, which would be a historic achievement for a male of the homo sapiens species, especially one old enough to have the money to fly GA

) there will be a flight when you are a bit cold or had one coffee too many and you will be absolutely desperate. It's a rubbish position to be in.

And there is almost no utility value in GA flight unless one makes a "provision" for this.

I guess that if flying around Germany, or the UK, in good weather, there are enough airfields one could drop into. But further south in Europe this rapidly stops being the case.

On my original Q, I know just one pilot who has the Digidata, and he informs me that the LFOB display on that is what one would expect, even if flying a DCT leg for the time being, but it is displayed only while a button is pressed.

Peter
Administrator
Shoreham EGKA, United Kingdom
17 Posts
This thread is locked. This means you can't add a response.
Sign in to add your message