Getting line-level audio from an unused headset socket

I see a stereo plug there and it should be so people can listen to music.

It seems that the safest way will be to buy a 1/4" stereo jack plug and put a mixer on it and a pot to vary the level e.g. 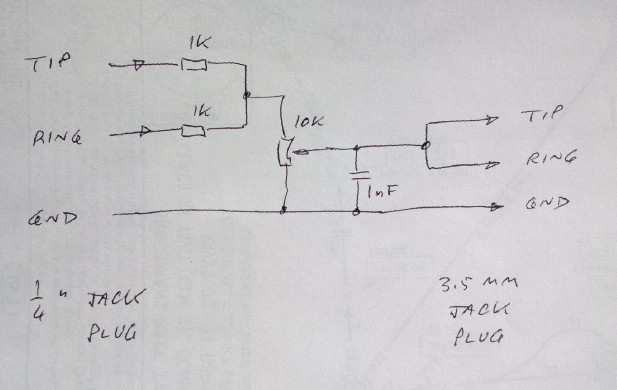 That should cover all eventualities of how the 1/4" socket might be wired. A stereo jack plug can be safely plugged into a mono socket if the plug is receiving only.

The capacitor is to filter out any HF muck coming down the wire.

Without digging out the TB20GT wiring, I am pretty sure it is stereo all the way around the aircraft (so music works, if nothing else) and this does mean that any music reaching the camcorder will be mono, but nobody will care about that.

I suppose the batt is to energize the electret/condenser microphone in the aviation headset.

As I understand it, aviation with its great respect for ancient technology and eternal backwards compatibility still honours the carbon microphone

For electret microphones, a resistor of 1-10 kOhm would be optimal, but aviation typically applies only 680 ohms from the +12v supply. Or so I remember from talking to a German engineer at some aviation salon, can’t remember which or when.

I’ve just tried the 1/4" to 3.5mm converter plug with a Sony ICD-PX440 digital recorder and it works! No more headsets lying on the floor!

The circuit I posted above works perfectly!

but it’s a start… about halfway is just perfect for the Canon G10 camcorder which in any case has a manually variable input level.

It works with the 1/4" jack plugged into the same intercom channel as a Bose A20, which is as it should be since the load is negligible, at about 11k ohms per channel.

I built it into a special 1/4" jack plug housing from Cliff, available from e.g. Rapid Electronics 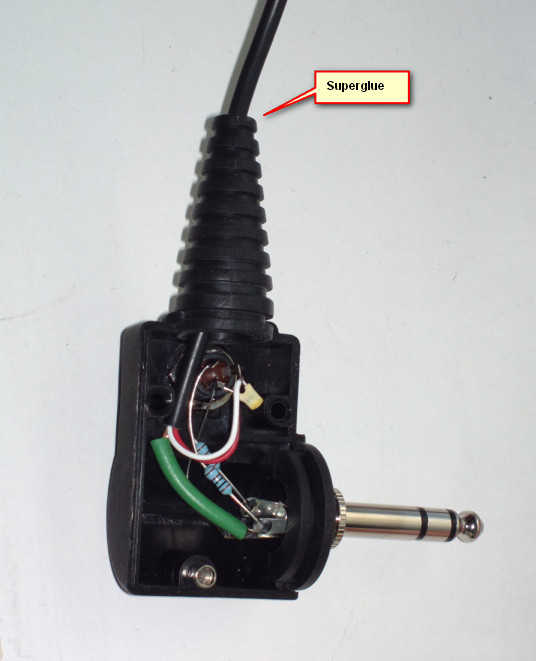 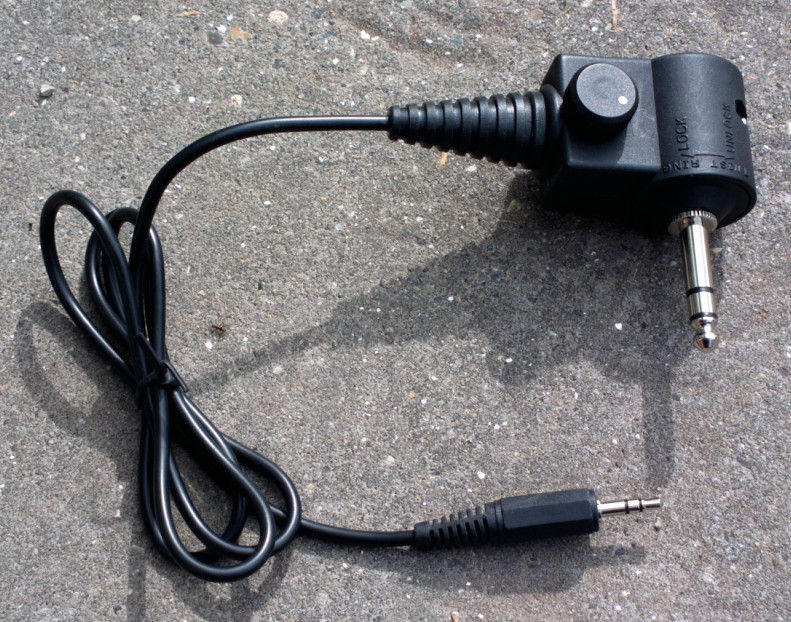 The sound quality is outstanding, on the ground. I will test it on the next flight.

What this doesn’t do is send audio to my Nokia 808 phone. For that I still need to use the mike tucked up into the headset. That was cut off from a hands-free kit and uses a special 4 pole 3.5mm jack. There may well be a way to get line level audio into it and I vaguely recall spending some time on it 2-3 years ago, but I have forgotten it. Most phones are not capable of accepting external audio onto a video, except from their internal mike (which is obviously useless for aircraft use) and on the 808 this is possible only with a 3rd party camera app. But even though the phone does great quality HD videos, it isn’t much good for aircraft use because of poor hand motion stabilisation.

I think just a cable will do the job for most people, I had no idea what sort of signal level is going to come out of those sockets, and with a camcorder which has a manual level control I don’t know what levels it can accept. And if you feed in too much, it will clip it and the whole sound track will be ruined. AGC is no good because it just winds up the gain during the periods where nobody is talking.

I should have experimented with turning the pot all the way up (i.e. simulating just your simple cable, Chris) and seeing how the manual level adjustment on the camera handles that, but I ran out of time.

Cameras are probably more sensitive than a voice recorder so my cable is probably good enough?

If it sounds good then it’s good

You can see clipping in the sound track when you import the audio into your video editor.

This is non-clipped (except very brief spikes, which nobody will hear anyway)

This is well buggered and will sound horrible 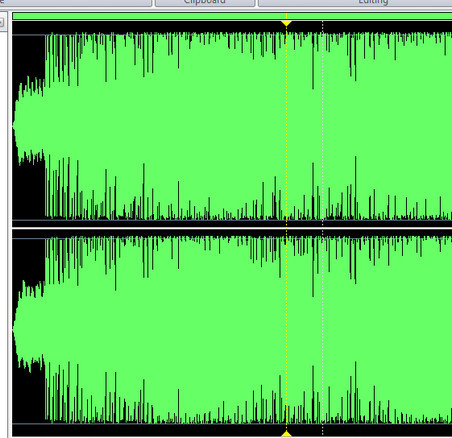 It’s a bit like overexposing (washing out) parts of an image. Once the data is gone you will never get it back.

And once it’s buggered, it cannot be recovered…

Chris, most cameras expect a microphone to be connected not a line level source. Your cable only works with your recorder because you were able to set it to expect a line-level input.

If you connect a line level source to a microphone input without attenuating it, it will sound awful (and look like Peter’s second screenshot above).

Your audio sounds superb – I think I’d go as far as saying it’s the best I’ve ever heard.

stevelup
25 Posts
This thread is locked. This means you can't add a response.
Sign in to add your message