BTW: EASA are very unhappy about “registration shopping”, i.e. trying to benefit from regulatory arbitrage by choosing your tail number in a different state. They think this just shows that the system is still broken and they want to make sure the reasons for this disappear. I think that’s a good attitude.

How would these new rules affect a flying club with a Cessna 152 This now being an ELA1 aircraft.

Has anyone discovered a layman’s (i.e. non lawyer and LSA1 aircraft owner) guide to the new Part M- light legislation.

For instance can I now disregard the 6-year CS prop overhaul requirement (my aircraft is UK registered and private use only) ?

I thought I was reasonably bright and fluent in English until I tried to read the new EASA legislation on this. It is complete and utter gobblydegook.

I suggest we should demand that EASA legislation is vetted by the plain engish society, if that organisation hasn’t been outlawed by the EU and still exists.

The guidance material in the NPA from p42 is not a bad “layman’s guide”:


The guidance material in the NPA from p42 is not a bad “layman’s guide”:

Do you have a link?

UK CAA have issued this..


Is Ab-intio training classified as Commercial

EASA new Regulation 2015/1088 Minimum Inspection Programme (MIP) – Information for UK aircraft owners
To standardise maintenance programmes for EASA regulated aircraft a new Minimum Inspection Programme (MIP) has been introduced by EASA. This is an amendment to the Part M regulation and will apply to ELA1 aircraft (Maximum Take-off Mass (MTOM) of 1,200 kg or less and not involved in commercial operations).
Owners can now choose from a number of different aircraft maintenance programmes (AMP).1088 introduces two new options to the existing Part M requirements, one of which is the MIP, the other is based on manufacturer’s recommendations. (All AMCs which must at least meet the standards of the MIP).
Who this affects:
Initially owners of ELA1 aircraft, Part 145 organisations, Part M Subpart G CAMOs and Part M Subpart F maintenance organisations and Licensed engineers.

Timelines:
For ELA1 aircraft, the changes came into effect on the 27 July 2015. A template for the new AMP options described above will be available at www.caa.co.uk/ga from Wednesday 28 July 2015. This may be revised by EASA in September when it is also due to publish acceptable means of compliance and guidance material (AMC and GM). In the absence of current published AMC/GM, the information in the EASA comment response document can be found at CRD 2012-17 (pages 202 to 277).
The introduction of the MIP precedes the new Part M Light regulations that are expected to be adopted in summer 2016. Aircraft owners will then be able to choose either Part M or Part M light and the MIP will then extend to aircraft between ELA1 (1,200kg) and ELA2 (2000kg).
We will issue further updates in September 2015 on the changes relating to MIP. We will also be providing information on the future of LAMP now that these changes have been published.

Does anyone know what the changes might be in practice?


Does anyone know what the changes might be in practice?

As a matter of fact: YES, and it looks good to me: 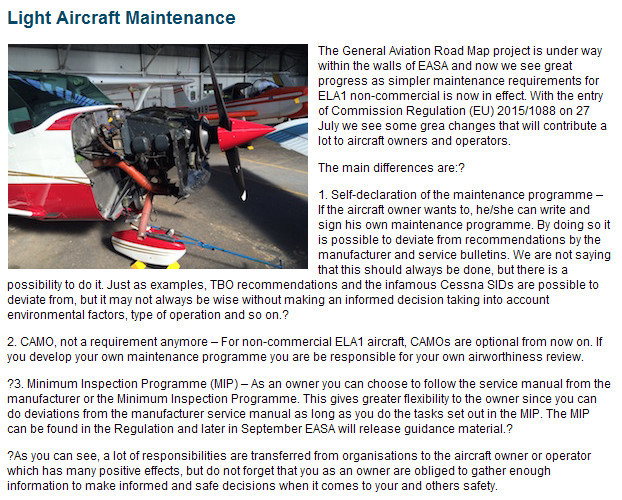 So it sounds like under 1200kg you can do everything by a freelance EASA66 guy.

My understanding is that these changes have however made the 2000kg figure even more cast in concrete.

Peter
Administrator
Shoreham EGKA, United Kingdom
301 Posts
This thread is locked. This means you can't add a response.
Sign in to add your message

Part-M light: Any news on when it will come into force?
Drawing up my own maintenance program - SDMP - and a maintenance company refusing to operate it
Flypad panel mount in a certified airplane
Rules on mounting of portable GPSs and such