They are getting closer for certified aircraft. 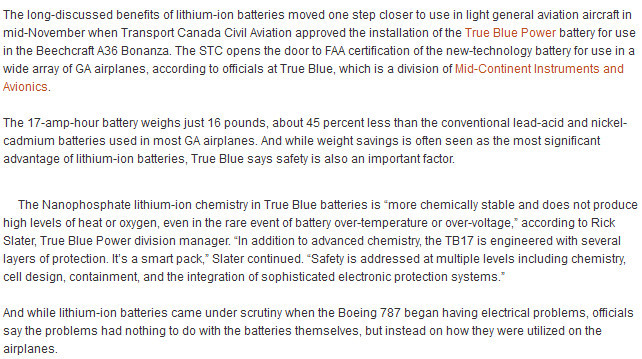 I cannot see how one could charge a lithium battery using the traditional (constant voltage) lead-acid charging method. Do these batteries incorporate their own chargers, and inverters, etc? 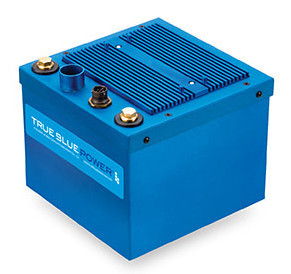 The lithium batteries I have previously seen at say Aero Friedrichshafen, for the homebuilt market, were just plain cells, no electronics. As far as I could tell speaking to the people, they were charging them simply from a constant voltage bus.

For as little as I know about the lithium technology – I have an irrational grudge against the stuff after a famous fellow of mine burnt to his death in a plane thus powered – it is almost general for them to have some electronics included. This certainly applies to those used in R/C model aviation, where the technology seems at its most advanced.
Unless I am much mistaken, charging Lithium cells directly from a constant voltage bus is sure to bring problems, probably disastrous.

All this applies to the LiCoO2 that one commonly sees in consumer electronics. There is however also a technology (or “chemistry”) called LiFePo4, which does behave more or less like a traditional lead-acid battery, including all the disadvantages. From the published text it is not clear to me which one is being applied in this product.


They are getting closer for certified aircraft.

The CitationJet 4 is certainly a certified aircraft and is being delivered with a Lithium battery since 2010. There have been some problems in the beginning and some aircraft were retrofitted with NiCd batteries, but as far as I know they have it under control now.

Many Lithium batteries come with protection chips at cell level, so even if it looks like people connect them directly to the DC bus there is some electronics in between.

I spoke to the guys at Avionik Straubing about the True Blue Power battery. They are a distributor but haven’t sold any yet. The battery does indeed have some electronics inside to ensure the proper charging mode without any modifications to the aircraft. The biggest problem is the price – a replacement for Gill G-25 costs around 7000 euro.

Ultranomad
LKBU (near Prague), Czech Republic
vic
06
Certification aside, here are some tech info on LiFePo4 accus. Prices depend on the dealer a lot. Next time I need one for a motorbike I will get one of those:

Admittedly it’s not certified but there’s a lot of buzz about EarthX LiFePo batteries in the Vans community. They seem to work out at around 1/3rd the weight and 3 times the price of lead acid. They include internal circuitry to protect the battery from being run flat and from over-charging.

Thank you @Raiz , I will remember that. The technology and its market are however in quick evolution.
I am not surprised that it is again a LiFePo product, wisely avoiding the search for the utmost.

a Concorde sealed lead acid sells in Europe for about $600+VAT – example – so these batteries are a lot less than 3x the price of a good quality old style battery. They are much smaller and lighter. The energy stored in these two examples is about the same (remember one is 12V and the other is 24V) but the weight is almost 4x different.

The electronics required for operation in the traditional GA constant voltage charging system must make certification a big job. I guess that all the time they can sell into the Exp market and do it at these prices, they will stick to that and not bother to certify.


The CitationJet 4 is certainly a certified aircraft and is being delivered with a Lithium battery since 2010.

Well, sailplanes are aircraft too, Antares is certified AFAIK and Lange started delivering the 20E with electric propulsion (it’s a self-launching motorglider with the traditional pylon arrangement) in 2004 I think. They use batteries from SAFT, I think it’s the same model as used in F-35 and some other aerospace applications. And plenty of sailplanes have Lithium batteries to power equipment (they are lighter, smaller and don’t drop voltage as much as they discharge), but sailplanes are not as tightly regulated.

Martin
47 Posts
This thread is locked. This means you can't add a response.
Sign in to add your message

Electric / hybrid aircraft propulsion (merged)
The future of aviation and the environment
MH370 (merged thread)
Lithium fire - what would you do?