We looked but couldn’t find one. I think we wanted the transponder on being in controlled airspace with a TRA close to the destination and wanted the intercom also which is part of the audio panel. We only had 40 mins to coast in and land I think so we weren’t too worried about draining all power. We could have done without the Nav & GPS aspect of it, but not being able to select the items you need individually in an electrical failure is really the point I was trying to make there. Being in the same aircraft aircraft before its panel upgrade would have given us more selectivity. Having fixed gear, and manual flaps also made it easier work.

I think selectivity in a panel is good, failures are common and any simple back up system is good. This G5 looks like it could really be a big hit.

I’m betting that they will release a certified version with eHSI giving full reversion between the AI and the HSI which would be a serious challenger to Aspen in the retro-fit market.


I think selectivity in a panel is good, failures are common and any simple back up system is good

I think this is more psychological than real. Redundancy (automatic) is what has shown to give best reliability or availability/MTBF or whatever you want to call it. The problem you describe is, IMO, fundamentally a lack of needed redundancy when grouping together functionality in an all electric setup. When all things are electric, then one weak link is of course the production and distribution of electric power. A glass panel could be galvanic isolated from the rest of the electrical stuff, and have it’s own battery of proper size, by using for instance this. That way you will have the needed backup/redundancy of electrical power, as well as much higher quality of the power (protecting the equipment), and it is fully automatic. Duplicate that system, and there won’t be a total failure in a hundred years. The backup functionality of the G5 is tightly linked to it’s battery, so it’s really just an odd and very limited way of improving the reliability of electrical power.


The backup functionality of the G5 is tightly linked to it’s battery, so it’s really just an odd and very limited way of improving the reliability of electrical power

I’d agree that it’s limited (it’s only going to power the G5 after all) but battery backup of an individual instrument doesn’t strike me as being ‘odd’.


The backup functionality of the G5 is tightly linked to it’s battery, so it’s really just an odd and very limited way of improving the reliability of electrical power.

Lot’s of variables would condition this, to start, the G5 can be installed as either a primary AI source OR back-up.

In both cases, the battery is another back-up device (in the likely event of the ships’ loss of electrical power), so all in all we’ve got 3 levels of “fall back” redundancy going here.

Perhaps comparative RAM (or FMECA) studies should be undertaken when making such decisions…. has anyone done this?

We will now get two posts, plus I will get some PMs, asking what RAM & FMECA stands for

They are not aviation terms, so why use them here, in a one-liner without any explanation?

Ok…those who can answer my question will by definition know what it means…. ie using Monte Carlo analysis (please use Google if you don’t know what this is) or other numerical methods (again Google is your friend) to calculate the probabilistic uptime (reliability) for the system based on failure modes and effects (and criticality) analysis…

And btw, I think you will find that Boeing, Airbus, Sikorsky et al do in fact use these terms….the question is why not use the same methods when making significant changes to critical systems?

To further make the point that FMECA is used in the aviation industry (actually was an early adopter of the technique):


I’d agree that it’s limited (it’s only going to power the G5 after all) but battery backup of an individual instrument doesn’t strike me as being ‘odd’.

Maybe not seen isolated. It will most probably improve the situation in an old panel. I was thinking about the selectivity in the panel from the other post. The selectivity is a solution to another problem, and that problem is a weakness in the electric power supply. It is better for the overall reliability to fix that weakness instead of patching the symptoms. At least for non-certified aircraft, the power supply to instruments and avionics can be made almost fail safe.

For a real analysis, you have to do something along the lines of what AnQ suggests. But lets say that 70-90% of all electrical faults are somehow caused by the electric power supply. Then the fundamentals of reliability engineering say that what you should do is to fix that problem (kind of common sense). When that is done, you can start to look at the other failure modes. It may turn out that the battery in the G5 is irrelevant for added reliability (because the power supply problem is already fixed), and then you do not want the battery at all, because by itself the battery and the added electronics needed, is also a failure mode.

I was 1 mm from purchasing the G5 myself, the non-certified one. The reason I didn’t was a chose another solution because I wanted more flexibility, and the G5 is just too small (for my eyes) to show air data and AI and GPS and all the things it can show. As an AI, it looks perfect though, and it shows air data as a bonus, and it has a backup battery, which in an old panel makes it a no brainer as update to an old vacuum AI.

My G5 backup after picking it up from the installer :-(
Initially the attitude was correct, before it started to slowly drift. Besides going back to the installer and have him repeat calibration and vibration testing, I am trying to figure out why the G5 is unable to detect a flight attitude that is physically impossible, despite having GPS and pitot static data available. The software algorithm should discover that inputs are disagreeing and hence are not trustworthy and red-X. In my opinion a serious issue with G5. 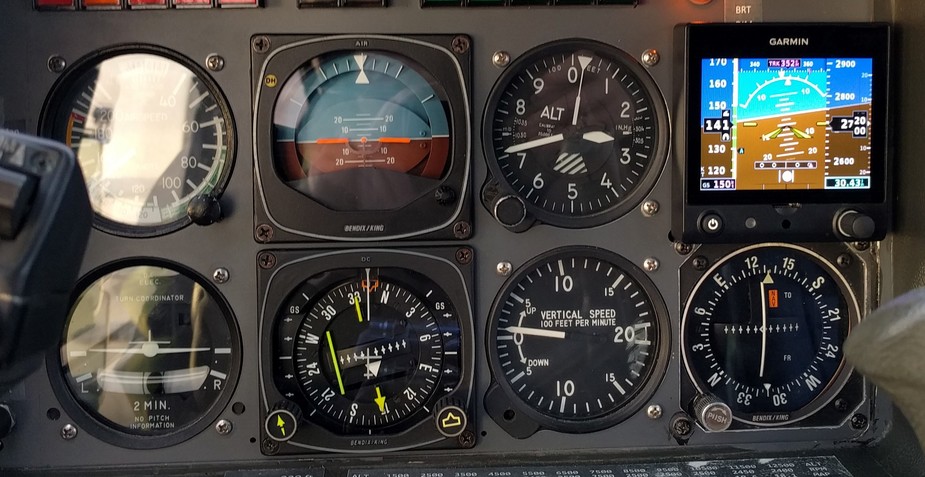 Lucius
288 Posts
This thread is locked. This means you can't add a response.
Sign in to add your message