Revalidation of used parts e.g. removed from other aircraft

BTW Michael you are right about the prop work. The case I know was working under a 145 umbrella.

That’s not surprising. Most people are not in a business to know the rules. There are usually good at what they do and know their SOP’s but not the detailed regulations. That goes for pilots, Air Traffic Controllers and maintenance people alike.


Now bearing in mind I know they are original Cirrus parts, they fit my plane, they are airworthy, I’m prepared to take responsibility for them – but no, the maintenance director will refuse to sign it off without the correct paperwork.

Have you checked the P/N of the seats? Is that P/N allowed in your S/N according the IPC?
Installation of parts without Form 1 presentation local copy

I would see if you can discuss this with your maintenance shop. You willl need a good relationship, so I would would ask them, if they see a possibility for it using that route. You should sign the form for acceptance of parts according 21.A.307(c)

For the EASA 145 part, they are correct, either they removal and install them, or you need to supply with Part 145.


Well, yes and no, and this is a neat trick, don’t you think? Aircraft manufacturer X could buy in some item (which is avalable from the OEM with a CofC) and by sticking a sticker on it with a different P/N they make it a “different part”. Job done. Substitution not permitted under EASA!

I hardly doubt you can do that under FAA either. Can you legallly buy just a parker pump, which looks similair to the socata P/N one, without any paperwork and just have the A/P sign a release “renewed pump” I don’t think so.

IMHO it is criminal to do such things.

I didn’t say that… 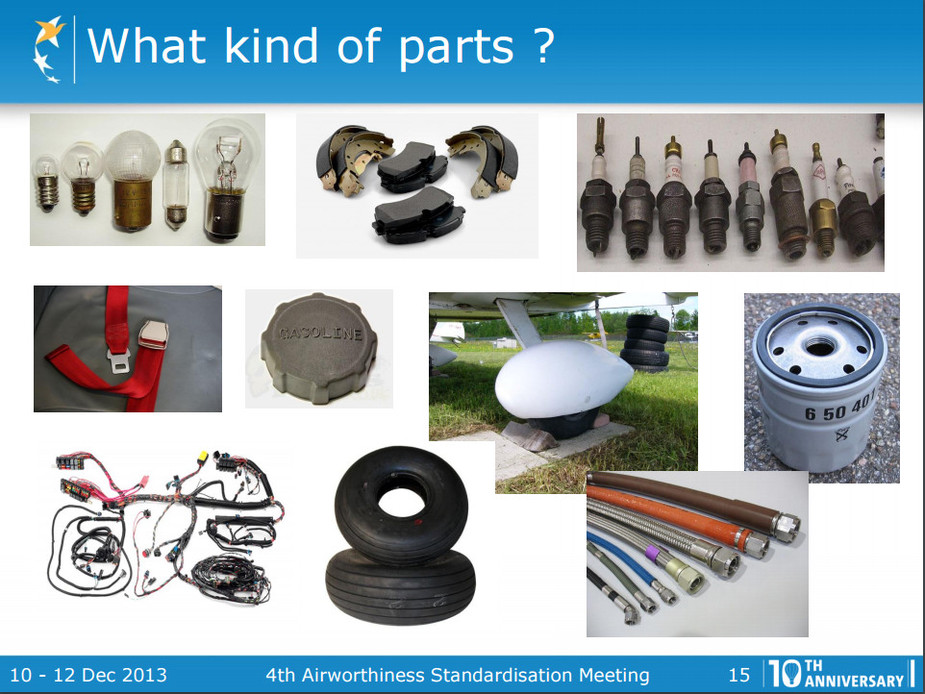 It is clear that this is intended to be almost worthless. Half this stuff you can install under pilot privileges. Oil filters? Who gets a Form 1 for an oil filter?


It is clear that this is intended to be almost worthless.


I hardly doubt you can do that under FAA either. Can you legallly buy just a parker pump, which looks similair to the socata P/N one, without any paperwork and just have the A/P sign a release “renewed pump” I don’t think so.

IMHO it is criminal to do such things.

In the US, if they A&P knows the pump to be identical and supplied for aircraft service by the vendor (not a car part, for instance) this would be fairly commonplace practice. Few people are going to get excited about a part number, particularly a private owner.

An A&P (non-IA) does not release a plane to service as far as I can understand – he’s not authorized to do so. He just makes a logbook entry saying he installed a part. Its never been clear to me if ‘release to service’ has any meaning for N-registered private aircraft, except for after an annual inspection.by an A&P IA.


In the US, if they A&P knows the pump to be identical and supplied for aircraft service by the vendor (not a car part, for instance) this would be fairly commonplace practice. Few people are going to get excited about a part number, particularly a private owner.

Still the same questions. Socate says this gear pump is P/N 12345, you put in a Parker P/N ABCDE, which looks similair.

I think I have found a replacement pump, directly from Parker, for about GBP 450+VAT (if they think you are a trade user) or GBP 750+VAT (if they think you aren’t ). These are cheap hydraulic pumps, used all over the place. I think the P/N 108BIC19ALL4V2912 is the exactly same model as Socata use. I will buy one and see… What you must not do is disclose the aircraft application when ordering; Parker are very switched on and will block the sale. They claim that they are not allowed to sell to the aviation market but in reality they have an agreement with Socata, and others… They have told me that the above P/N is very rare and they have sold only one, and it went into a light aircraft, so it probably is the right P/N

This is a clear example of a bogus part.

With the fuel pump, a similair story. One needed a fuel pump for a TB, found a similair one PMA, with a diferent elgibility, and decided to install that anyway.

In Europe at least, people tend to be carefull with their license / Part 145 approval etc. I doubt an A&P / IA would willingly sign this off.

It is not a bogus part, Jesse. A bogus part, in the normal use of the word in English language, is some kind of fake/forgery sold with forged aviation paperwork.

What you are now illustrating is the widespread industry practice of custom-labelling aviation versions of otherwise identifiable as identical commercial parts, to ensure that

Obviously I can understand the motivation in all this, having a business myself.

Most aviation vendors (like Socata) try to get the manufacturer to label the part with a special number, so the normal label is not even present. Obviously the manufacturer charges extra for this… especially as the batches are small and often the part itself is obsolete and no longer manufactured for sale to the normal users. But the extra cost is absorbed easily because the aviation-sourced version is at least 3x the price and the aircraft owner is usually over a barrel, either because the plane cannot fly or because the maintenance company demands a part with a Form 1 and this happens at the Annual.

BTW the Parker-sourced pump which I documented was not installed. I am flying with one bought from Socata with a Form-1, for about €1200

There is a fair chance it was old stock and won’t last long, like the €1400 starter motor I had from them some years ago which sat on their shelf for about 10 years, no lubrication, and seized up within weeks. But hey it came with a Form-1.

The reason I did that gear pump exercise was to help other owners for when the supply from Socata comes to an end. It didn’t cost me much and was a fun project.

Admittedly this is getting away from the OP’s original Q which was concerning the installation of provably genuine parts but which didn’t have a paper trail.

But what is “provably”? Only in the OP’s case it is “obvious” that an SR22 seat could not have come from a Ford Cortina. If this wasn’t obvious, then you are back to the earlier discussion.

I think the best part of the FAA system is that light aircraft maintenance is often done outside of maintenance organizations and rigid supply chains representing vested interests. Those interests have as a result withered to the point that there is no consequence to ignoring them unless they can sell you something for which paymrnt to them represents your own interest in maintaining your property.

Silvaire
USA
88 Posts
This thread is locked. This means you can't add a response.
Sign in to add your message

Considering aircraft purchase - finally ;-)
A TB20 being parted out
Qualifications for doing avionics work (EASA-reg and N-reg)?
Installation of parts and appliances released without an EASA Form 1 or equivalent