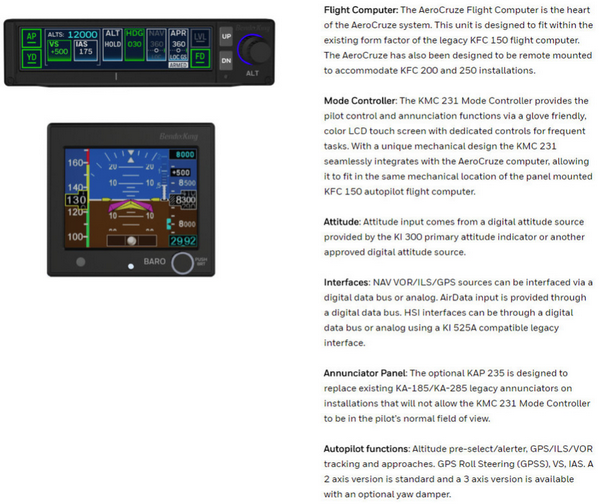 Curious they mention the KI300, which has been abandoned…

I doubt its existence. The product sheet looks like CGI. Also: I didn’t see support for the KFC225 nor my KAP140.
From past experience we’ll probably see a prototype in Oshkosh 18 and the first products towards 2020..

Apparently it was demoed at Oshkosh, even though the website pics are CGI.

Also, for an autopilot getting a TSO is one thing. It does require an airframe specific STC to be installed.

It looks interesting if it is a slide in replacement for the KFC 150 and 200/250 installations (or remote in the latter case) where servoes and all remain it may be a nice upgrade. Something like the Avidyne is for Stec 55x’s.

Big question will be what the approved attitude sources are.

There have been a number of discussions in the new Garmin GFC500 and 600 autopilots.
Have to say that these new autopilot announcements from competitor suppliers slipped by without much notice:

Thanks for posting that, wigglyamp.

I have no idea about the STEC but the KFC230 quite possibly doesn’t exist. 5 months later the website still shows a CGI image so they have not even got around to producing a resin model (of the diecast or injection moulded front panel) for a photoshoot.

Actually it would be almost an immaculate conception if it did exist, given that HBK (Honeywell Bendix King) have not developed a single product since around year 2000, and have not shown the ability to access any of their firmware (for bug fixing) since around 2003. The KFC225 saga (an estimated $20M worth of replacement servos sold to replace the burnt out ones) has reduced their credibility to minus 273.16 degrees

Of course I would be delighted to be proved wrong. We need more competition in this business.

That could be an option in my Beech. Leaving the servos, the HSI etc, and just replacing the KFC150 control unit with a new one that masters roll steering and alt preselect…. all @10k, not so bad…

They did show demos of working front panels at least.

I wonder if this is an HBK development or if they contracted it out like they did with the KSN770/KFD840 (both dead products now).

I’m wondering, what happened to BendixKing’s announcement of the new AP supposed to be able to replace their legacy range for a relatively low cost as existing components can be used ?
Will there be an EASA approval ? Is it even advisable to mix old and new components as you end uo with used servos ?

BK/HBK are taking for ever to bring out anything these days. It would be a miracle if they get this to the market.

The KFC225 servo problem is a combination of a stupid vulnerability in the KS270C/271C servos combined with dodgy software in the KC225 computer. To melt the servos (as happens in certain airframes like the TBs, the Caravan, and some others) you need both of these, combined with some “feature” which is airframe specific (and is probably wiring related).

If they fix the KC225 software bugs (I got one on a flight on Friday, descending to a preset altitude, but it descended through it and continued, despite ALT ARM being active) the servos will last a lot longer, but will still wear out eventually, much sooner than they should, due to the use of low (bottom-end Chinese) quality motors from Globe. Maybe every 1000-2000hrs which is not too bad.

Peter
Administrator
Shoreham EGKA, United Kingdom
92 Posts
This thread is locked. This means you can't add a response.
Sign in to add your message

Autopilots which use GPS to fly an ILS
Dynon and G500
Exchange Autopilot options for a TB20
The end of a once great company - Honeywell / Bendix-King?