This local copy is an interesting analysis. 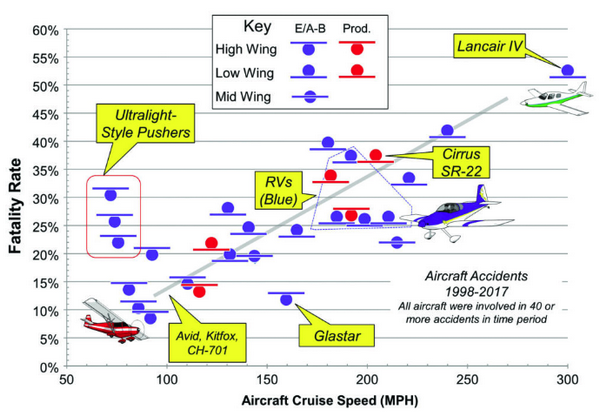 It surprised me that the Cirrus had a higher fatality rate than similar speed homebuilts, despite it’s parachute, and its usage. Several RV fatals in the NTSB reports involve low level aerobatics, or collision with wires, which are not normal Cirrus accident modes.
PS Diagram relevant to high/low wing thread??

It’s indeed relevant to both the low/high wing thread (already posted here) and the many Cirrus safety related threads. There is however a clear relationship between speed and the chance of fatalities in an accident. Plus the mission profiles are different between homebuilts and certifieds, with the latter flying more demanding profiles, especially in the US where GA has a significant utility value.

It’s a very interesting graph. My initial thought was that the simple physics means you’ve got a lot more energy with the higher speed, and presumably higher stall speed. It would be interesting to know if the aircraft’s stall speeds were plotted rather than cruise speeds would change it at all.

But then there are all sorts of other factors such as general mission type that I’d have expected to have an effect. particularly if you’re cruising up high you’ve got more time before you reach something solid and unforgiving.


It surprised me that the Cirrus had a higher fatality rate than similar speed homebuilts, despite it’s parachute, and its usage. Several RV fatals in the NTSB reports involve low level aerobatics, or collision with wires, which are not normal Cirrus accident modes.

It may be affected by pilot experience. An average RV pilot is probably a lot more experienced than an average Cirrus pilot.

It is also interesting to see that high wing is more present in the low speed segment, while everything fast bar one is low wing.

So basically, the only factor influencing safety is speed. Other studies have shown that the certified planes are not really safer than homebuilds after the first few hours. And these first few hours accidents are also typically due to inexperience of the pilot on the type.

So basically, the only factor influencing safety is speed.

SEP fixed gear with a Vso around 40 knots (Warrior DA40 172) benefit from a significant safety margin.

The tail wheel off airport types (PA18 Maule) less so because where they operate-probably half the hours flown for these types is in Alaska/Canada.

There are two factors VS0 stall speeds which is aircraft specific (quadratic for fatality) and the gap between cruise speed and stall speed, which is pilot skill specific and relates to handling (linear for fatality)

Something that stalls at 40kts and cruises at 220kts may kill inexperienced guys, something that goes into stall at 80kts kills anybody

I think fixed vs retractable gear is also a factor. retractables are much nastier because of the drag of their unfaired gear. Much less tolerant to sloppy energy management

Flyingfish
LSGG, LFEY, Switzerland
22 Posts
This thread is locked. This means you can't add a response.
Sign in to add your message

Are all UK/LAA homebuilts safe?
Buying homebuilt (basing in a different country)
ECAC Status for homebuilt / experimental (flight privileges within Europe)
"Plastic planes" without bonding - how?