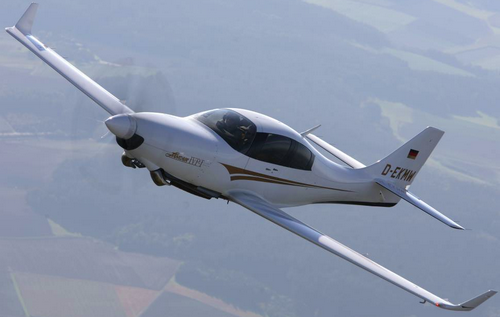 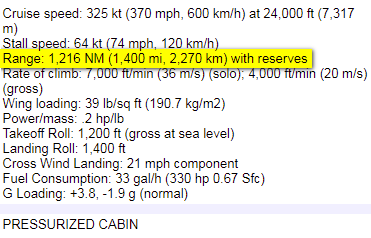 It is very unusual to see such a range in a small turboprop with the RR engine.

In fact the whole performance data is unbelievable!

Yes, its performance seems hard to believe. Where are these125 gallons of fuel stored? Wings seem not to be that voluminous.

Some specs claim that with extended tanks it can hold 145 gallons.

I would not doubt the range and speed. I had a customer who owned one with a Walter engine. Amazing performance but at a price. Everything was right on the edge. Look at the tiny wheels, look at the tiny elevator. This owner once told me he did prefer 1200m runways as he had to approach his plane at Jet speeds. Then after a while he now longer did respond to emails and later I looked up the NTSB database for N86NW… A very nice and passionate aviator who took the plunge and did purchase ADL device serial number 1. Be carefull out there and maybe go a bit slower in planes with smaller holes in the cheese.


It is very unusual to see such a range in a small turboprop with the RR engine.

In fact the whole performance data is unbelievable!

The P4 is a pretty unbelievable plane per se and also one where everything is very much on the edge. Even the piston version is known to be quite difficult to fly and needs long and moreover wide runways. With full take off power on, it will not hold direction below a certain speed on the runway, it was described to me that one owner said he lines up pointing off center to counter that effect.

What this kind of plane will do when equipped with an even stronger turboprop I don’t even want to imagine.

The report Sebastian has pointed to speaks of numerous issues the pilot had with the airplane, amongst which AP issues (rectified) and others. Apart, the airplane was massively overweight (500lb).

I don’t doubt the performance much. Lancairs always were about speed and took quite a bit of a hotrod choices which prevented it from ever being certified.

There are not many airplanes I’d reject straight out to fly with, but this would be one.

Can this type of aircraft be flown IFR in EU?

Of course it can 😎

You mean in some countries?
Where it should be registered then?

Oh dear not this one again

It probably can in Norway and a few other places. Elsewhere, yeah you can, and the Eurocontrol data shows there is a fair bit of it going on (the data was posted some years ago) but it isn’t legal.

These are airspace limitations, not limitations on the Permit (the removal of the “VFR-only” restriction which is the traditional method in Europe). The latter is easily removed – for example with an N-reg Experimental. You just end up with the little issue that you can’t practically fly it anywhere

Someone I know with an IFR certified G-reg RV found France was OK with it but not Germany, for example. So basically this is a useless plane for IFR in Europe. Great in the US though

It can fly IFR freely in EU as much as Microlights can roam free VFR in EU, all of it is possible because of “freedom of mouvement of pilot & aircraft” will allow one to get airport access without too much ramp checks on his flying permit, the tiny difference is the former are more likely to have ModeS TXP & Eurocontrol flight plans

Keep it on N-reg and landing when airport is LVO would a be a bad start !

Ibra
Paris/Essex, United Kingdom
66 Posts
This thread is locked. This means you can't add a response.
Sign in to add your message

What 80 inches MP can do
Homebuilt / ultralight / permit (non ICAO CofA) and IFR - how?
What's the maximum range of your plane?
Lancair assets for sale (except Evolution)