A doubling in battery capacity next year, according to MIT It’s basically an improvement of the old Li-ion battery, and cars using this battery will come already in 2018. 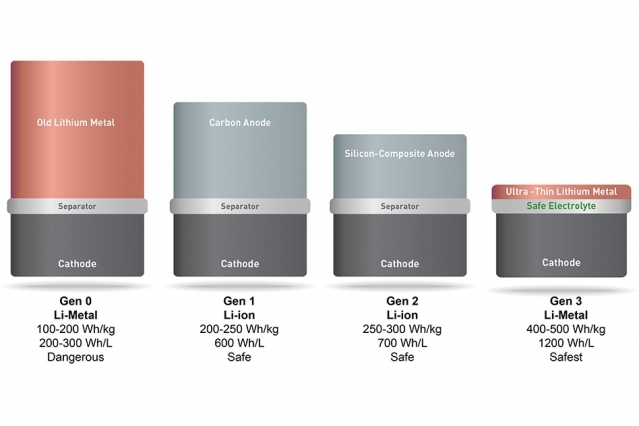 It is strange to see Li-ion classified as “Safe” while they are treated as dangerous goods on board airplanes, are responsible for at least four serious fires on 787s, and people are bringing fireproof bags with them in case their e-flightbag catches fire.

If you pack lots of power inside a container, all talk about “safe” will be relative. How safe is a fuel tank full of 100LL ? Jet A1 is safer, but not nearly as safe as water for instance.


Probably going down to 10% as they age over many recharge cycles.

Why should that be? Going down by 10% maybe. My iPad is now almost 5 years old, recharged 4 to 5 times per week. It still holds about 80% of it’s original capacity.

But the engergy of gasoline is transformed to motive power with an efficiency of 30 percent and less, whereas electrical power achieves almost 100%. So we are now approching 1/2 of the energy density of gasoline already.

… albeit with less flexibility to trade fuel for useful load… OTOH if designed around it it might not be such a disadvantage, many pilots, especially of light aircraft, don’t understand that trade anyway :-)

Those flying microlights do, but pretend not to

This doubling equates to about 2-3 h endurance on a light aircraft. This is enough to start mass manufacturing of microlights within the new EASA regulations (added max MTOW) for electric powered planes. Just think about the aerobatic performance this creates. 5-600 HP for 10 min in an Extra for instance, or insane glider tow planes

Or imagine the possible short field takeoffs if you put small electric motors on the landing gear. I am thinking along these lines:

While electric propulsion isn’t going to be used in a cross country aircraft any time soon, even this efficiency can lead to something useful in aviation:

Electric propulsion also opens up some new interesting opportunities for things like propeller design because you’re not as constrained by the engine: there aren’t power pulses, so thinner, lighter composite propellers can be used which would be entirely unsuitable for a piston engine, slower turning props as now you don’t need a gearbox etc.

@alioth those powered gliders are certified reality for over a decade now: http://www.lange-aviation.com and other manufacturers have electric gliders in their portfolio, too.

mh
Aufwind GmbH
EKPB, Germany
19 Posts
This thread is locked. This means you can't add a response.
Sign in to add your message