Are there details anywhere of what exactly a Legacy kit comprises of? I mean right down to the hoses and fittings.

I have found e.g. this but that is just showing a few parts.

I can put you in touch with a guy who built 2 of them. He has one at north Weald, which I posted here before. Beautiful – and even faster – machine 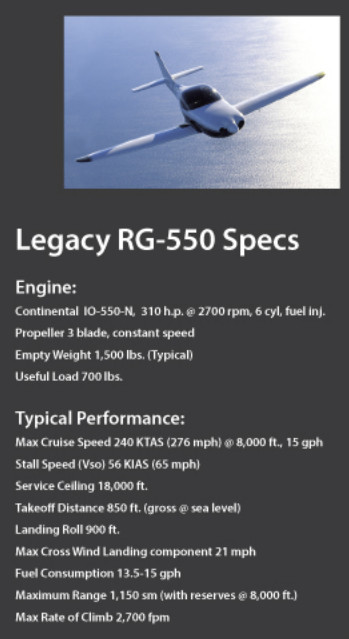 Why is the ceiling 18000ft? With this much spare power the plane should do something like FL250. A 250HP NA plane gets to FL200 in ISA conditions.

Peter, would you feel like spending a few years (?) building your own aircraft ?

That wing isn’t good up high, that’s probably why. Small wings lose their will to live in the FL’s. What you really need is a SX300. Will outrun a Legacy.. 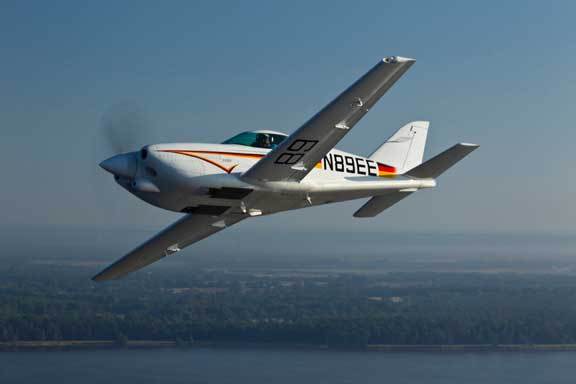 would you feel like spending a few years (?) building your own aircraft ?

I would buy a built one, from a professional serial builder.

Small wings lose their will to live in the FL’s.

The wing doesn’t appear to be that small, unless the quoted Vs of 56kt is totally disingenuous (which is possible and I believe very much so for the 320/360).

But it’s a fair point. The speed (240 TAS at just 8000ft on 15 GPH) has to come from somewhere, and it sure isn’t coming from the SR22-like 310HP. Something doesn’t add up. The MTOW of 1000kg doesn’t explain it because this is way beyond the Vbg and almost totally into parasitic drag.

The bigger point is that if the Legacy really won’t go above 18k there must be something really weird happening as you approach it.


That wing isn’t good up high, that’s probably why. Small wings lose their will to live in the FL’s. What you really need is a SX300. Will outrun a Legacy..

Here you go, Adam or anybody else in the market..

Eight of 40 have crashed in roughly 25-30 years. Guess you’d better stay ahead of it.

Could the 18k ft have something to do with the Class A that starts there in the US? Only IFR allowed above that.

I saw three or four SX-300 going out for some evening formation flying, so around 10% of the active fleet seem to live at Spruce Creek.

My friend is building a Velocity Jet – I think the aerobatic SX-300 has more bragging rights.

Could the 18k ft have something to do with the Class A that starts there in the US? Only IFR allowed above that.

Trying to think of the TB21 v. TB20 differences…

The TB21 has a different fuel system, evident from the lack of issues with the fuel totaliser which Socata mounted in the wrong place, under DGAC orders, rendering it near-useless on the TB20.

I am sure somebody who knows Part 23 will know the answer.

In Europe, permit+airspace regs allowing (which they mostly don’t), a homebuilt can go IFR up to the base of RVSM, so max FL280 AFAIK. Some have certainly done that regularly. But it may be possible to go VFR above that

I think we did that recently… no enroute VFR allowed in the FL200+ Class C AFAIK, unless this has recently changed. For sure you can do VFR above FL600 which is Class G.

Peter
Administrator
Shoreham EGKA, United Kingdom
24 Posts
This thread is locked. This means you can't add a response.
Sign in to add your message