I bumped into Peter at Shoreham the other day and he encouraged me to post into the non-certified section about the new RV-10 that’s just completed it’s test flying…. so here it is. Apologies to anyone who also reads Flyer, as it’s already featured over there!

I’ve been building an RV-10 since October 2015. I inherited it from another builder who started 8 years ago. He got the fuselage up to canoe stage in that time. I took it over and with help from a couple of friends it’s now finally ready. Yesterday it was all painted white, so the only tasks left are to paint one more wing, then the stripes and registration letters. We weeks work.

The aircraft is G-ORVX, with a serial number that starts with PFA rather than LAA due to its age. It was originally registered as G-OHIY 08/12/2007. I took ownership October 2015 and immediately had to put a big order in with Vans for the finishing kit, an engine and a propeller. I ordered lovely two-tone leather seats from Flightline interiors in the states.

The avionics are 3x Dynon Skyview 10" touchscreens which have fully integrated Transponder, Engine Monitor, Autopilot, Synthetic Vision, iPad WIFI Link, etc. It has a Funkwerk traffic detector integrated into SkyView. A PMA6000 audio panel with ‘audio placement’ technology. A VP-X runs it all, and we have a digital talking carbon monoxide detector.

The engine is a YIO-540 – Y meaning experimental. It’s a brand new engine, direct from Lycoming, but it differs in a few minor ways from the certified version, saving a lot of cash. The throttle body, for example, is stamped ‘experimental only’. There’s a 3-blade composite hydraulic MT prop. Ignition is standard mags, although there’s a slickstart on one of them.

The reason I chose the RV-10 is its capability. VNE 200kts, fast cruise 165+, eco cruise 145. It can lift 4×93 kilo adults, or 45kg luggage and a few less pounds of fat up front. Leg room in the back is suprisingly big – way bigger than a normal saloon car. Book figures say takeoff 500FEET and landing 650FEET. This means that a 1350 foot runway at Deanland should do the trick nicely.

I’m lucky to have a barn at my disposal, and spent a month decking it out in insulation and board. Along with a new flat floor and a heater, this made it the perfect place to build an aircraft. The previous builder ran out of space in his garage, and i think that’s why he gave up. You need a lot of space, it’s a big old beast!

For me the build had two very distinct phases – Metalwork, then Glass Fibre. I found the transition between the two very difficult – after enjoying the precision of Metalwork, and getting very good at riveting, it just ended… leaving a miserable world of poorly made parts, sanding, dust, itchy arms, and pinholes. Thank god it’s over. I’d do the metal bit in a flash again, but would really think twice about the fibreglass bits. I’d certainly never build a composite kit plane again!

I chose to paint it myself, an unusual step for most builders, and then after first coat I started to realise why most people sub-contract it out. I then advertised on gumtree for a bodyshop guy to come help paint an aeroplane and found a fantastic guy to help me out, he has saved a few weeks on the spray, that’s for sure.

The last few weeks of the build have seen a big push to get things done, but also a nervousness about not screwing up and ruining the deadline. I snapped a grease nipple leaving it’s thread stuck inside the nose gear bearing and found this more stressful than it would have been a month ago! Luckily i extracted and replaced it without too much trouble.

My inspector has been brilliant, always available at short notice, and a brilliant source of knowledge and advice too. We’ve had a good working relationship, and he’s kept things on the straight and narrow. I would have more confidence flying this aircraft than any machine i’ve ever flown before – i know it’s built right, and it’s really well engineered.

We towed it down the road, 1.5 miles to Deanland, and assembled it in the hangar. Weight & Balance was completed, and the final inspection before flight carried out along side last minute rigging checks and pitot pressure tests. Then the paperwork was sent off, and the waiting game began. About a month later, Francis Donaldson (Chief Engineer of the LAA) came to inspect it in person. He was very happy with the quality and said lots of nice things – but he spotted a mistake too – the registration lettters under the wing were ‘upside down’ – i.e. bottoms of the letters on the leading edge. This caused a week delay as they had to be sanded off and re-applied. Made me feel quite stupid.

Test flying began in October 2016, a year after the build started. First flight video is here:

After the first flight, i could sit alongside the test pilot as the flight engineer, recording all test results and running the schedule.

A Further 6 hours of test flying was very busy – auto pilot tuning, ASI & AOA calibration, and test after test as well as a 2 hour endurance, track below. Note that we had special dispensation from the LAA for a significantly expanded test area!

Aircraft performed beautifully – the 200kt VNE run is really a non-event. We were bedding the piston rings in at the same time, so cruising around at 150-160 knots typically.

Most of the flying was performed at light weight – about 1150kgs, and we were operating in and out of Deanland’s 450m grass runway. On the last day, it was an 8 knot cross wind with no headwind component at all – the landing was fine, but needed to be very precise, and only had 30-50m of runway left at the end of the roll out (but we didn’t use heavy braking).

At Max weight (simulated with water tubs) the takeoff and landing was noticably longer, so i would not be comfortable operating at MTOW and no wind. 10kts head wind should do the trick, but margins are pretty tight.

During the test programme, we landed at Goodwood, Shoreham, Headcorn, Deanland. With testing complete, paperwork is in the post and the LAA are digesting it.

Here she is at Goodwood: 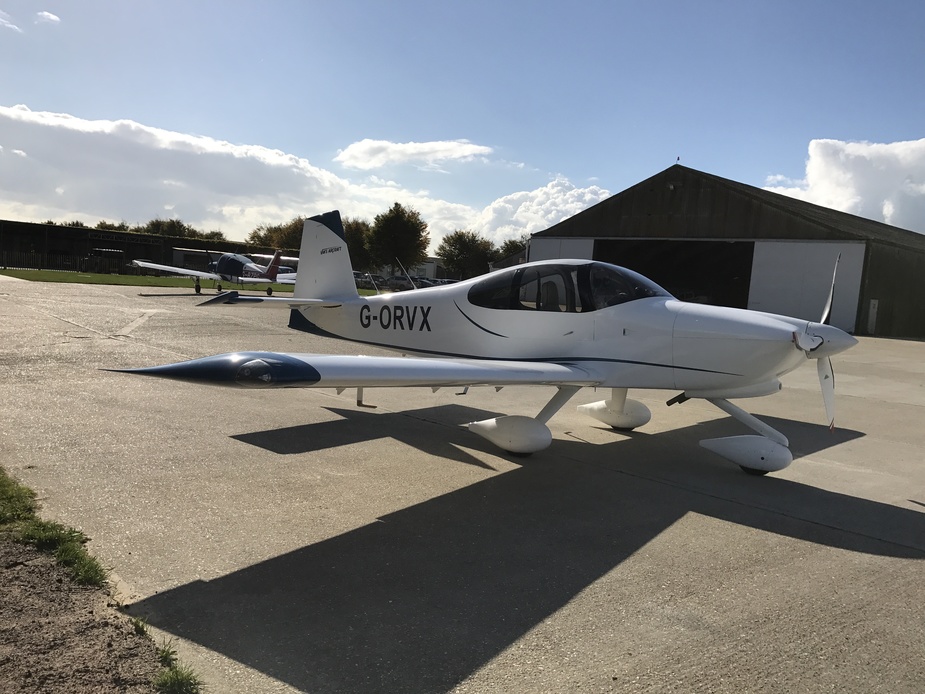 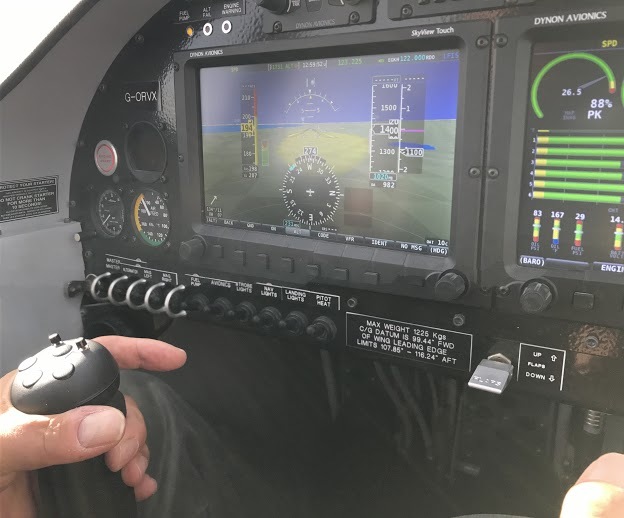 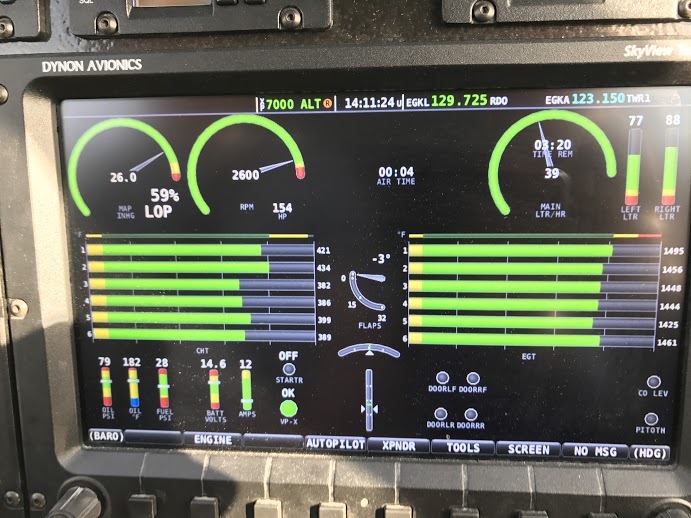 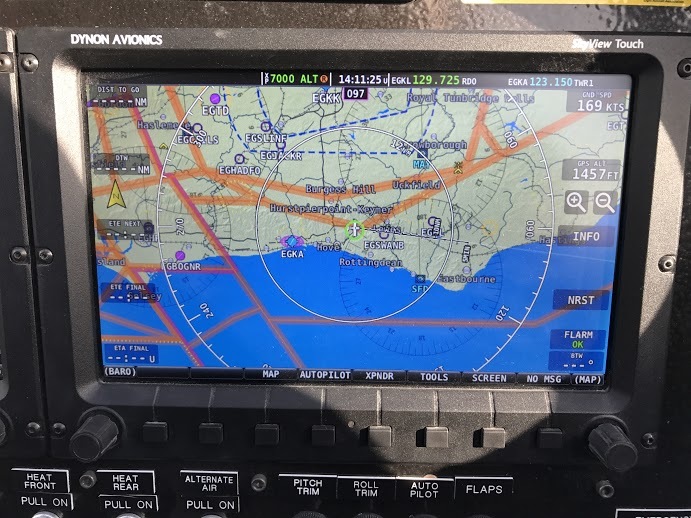 It’s come a long way from this! 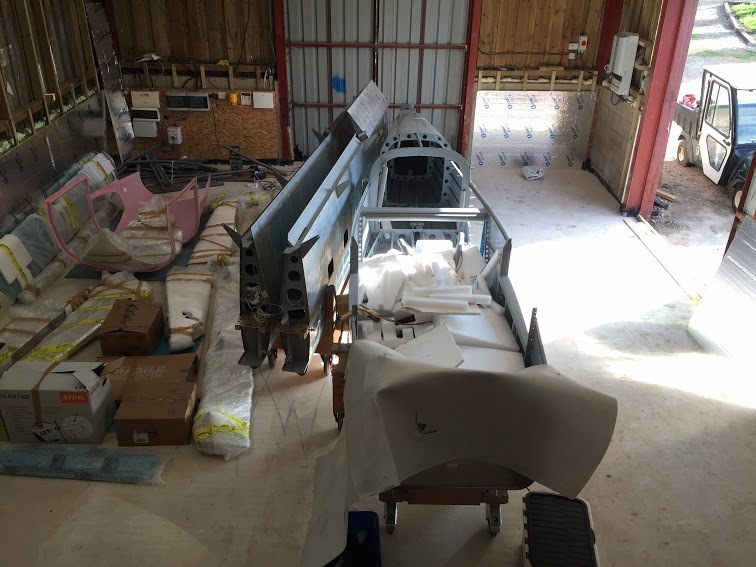 Very nice!
Do you think you’ll get IFR certification?
What’s the rough cost figure on something like that, if you care to share?

IFR certification is next year’s plan. There will be a number of small changes i reckon i will need to, or want to, make.

Mandatory will be a power bypass for the VP-X to allow a traditional circuit breaker to be popped in to power flaps & trim (I believe flaps and trim are the only ‘critical’ systems, because EFIS all have their own standby power, and this powers all the ancilliaries too)

Optional will be second alternator on the vacuum plate and associated circuitry.

The cost is a bit of a range, depending on what’s included and excluded (i.e. tools!). I’ve insured it for 140k.

I suspect that people will be copying your paint scheme… simple but very attractive!

It’s a really nice plane and an interesting write-up.

Nice write up Carl. I think the 10 is the next best thing to a Falco!

Nice one. Interesting to see how little you had to lower the nose and the low rate of descent at Vne

One question – for 59% lean of peak, the engine sure runes hot, especially 1 & 2. Is this normal, a snag, or was it that the engine hadn’t settled down yet?

That was after a prolonged climb – so probably a bit hotter than normal. The engine is brand new, so perhaps hotter than usual, but i don’t really have much to compare against.

Many thanks for your report Carl.

450F is high, but I don’t think many planes with this engine can climb at Vy let alone Vx to anywhere near 6000ft.

So what you see is not unexpected IMHO.

450F is abuse. I never found it too hard to keep temperatures below 400, or perhaps 420 on occasion in the climb when very high (although in a cruise-climb, not max climb); That is with a Continental 550, though.

Cobalt
Biggin Hill
12 Posts
This thread is locked. This means you can't add a response.
Sign in to add your message

What are you building/flying ?
Why has the RV been such a success?
RV-4s for $40K
Van's RV Aircraft for hire in the UK?