The aux tank for Austers have never had a fuel gauge, so I’m considering a project to fit one to mine…

Is there such a thing as a kind-of-generic off the shelf aviation quality (but not necessarily certified) capacitative fuel sender? The kind of thing I’d be looking for is where I can measure the depth of the tank and then get an appropriately sized sender. I’d make the electronics myself for the appropriate fuel quantity display.

There are several. You can also use capacitive plates, like Vans do, or make your own version.

A caution about capacitative senders if you are using Mogas.
The dielectric constant for petrol or Avgas is in the region of 1.9-2.0 and air is 1.0, but for ethanol it is about 24.3!

So a small amount of ethanol in the fuel could cause large errors in the sensor calibration.
Water has a constant nearer 80, so any water present could also cause a large error.

Also make sure any insulator material that you use is fully compatible with the fuel. That was an issue with Vans’ early sender kits.

The only good point about capacitive probes is no moving parts. Belite use a simple pressure transducer. How this is supposed to work with varying g component in an aircraft, sloshing etc. I’m not sure (the g forces average out over time? sort of I guess, but not really. Maybe it’s also combined with an accelerometer?) The good thing about Belite is also no moving parts, and virtually no effect from water or alcohol, and it’s dead simple.

Belite use a simple pressure transducer

That’s quite funny because I did exactly that for the oil level in our heating oil tank. You can just about see the transducer inside the plastic bag (there to keep the rain off) 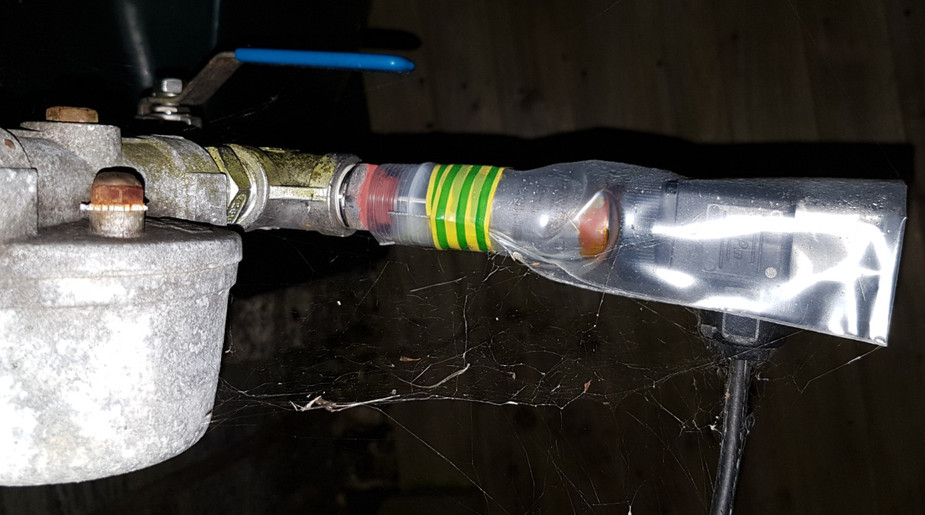 The main problem is that the transducers all use a resistor bridge and any moisture in there will attack that. They are conformally coated inside but still they get eaten eventually. I am on the 4th transducer now in 17 years. This one was about £300. Also one of them leaked (oil leaking into the cable and coming out inside the house) which takes a major manufacturing defect! Imagine that happening with avgas…

And the pressure due to my 1m head of oil is small – and QNH variations become very significant, so the transducer must be vented (a “gauge” type rather than an absolute type). And then you get this problem which can be solved only by venting the transducer to some space which is dry, which will be difficult in an aircraft that lives outdoors. You can get transducers that are vented via the cable, which is quite clever because any cable with circular conductors will obviously have an air path through it, but you still need to terminate the cable somewhere reasonably dry. Also in your case the fuel height is much less than 1m so you are dealing with an even smaller signal.

All doable but needs to be done very carefully and the history of aircraft electrics/electronics is not exactly a stellar verdict on the designers’ competence.

Yes, turns will make it over-read, etc, so you need to put in a delay. Or a real anorak would use an accelerometer and compensate it – at 2G you need to halve the reading

BTW a search here on “capacitive” digs out some info. The sensor needs to be constructed such that this applies, and then the relative permittivity (the dielectric constant) of the fuel is not critical.

How is this solved on airliners? They do have fairly accurate gauges – as well as totalisers.

The main thing for GA is the use of mogas with methanol. If you consistantly use avgas, I can’t see any real problems. Besides, how accurate does it need to be when looking only at the essentials ?

This is the clever thing about using a pressure gauge: pressure=0 means tank=empty. So if you use a different density fuel, you just end up with a full-scale error, but working down from there, it will still be proportional. OTOH any fuel tank profile based calibration will get shifted, so maybe this is not so clever…


Yes, turns will make it over-read, etc, so you need to put in a delay. Or a real anorak would use an accelerometer and compensate it – at 2G you need to halve the reading

As a real anorak myself, I would just make it so that the gauge can only move downwards until reset/power cycled, and given you’re not likely to maintain >1G for long, this would be fine and can all be done in software. Also use a rolling average as the level, a rolling average of the last 1 minute should be good enough. My plane doesn’t have an in-flight refuelling probe, so the only way the fuel level can increase is when the plane is stopped, switched off, at the fuel pump :-)

That method will break if you ever see less than 1G, which will happen briefly at top of climb, etc

So I would just put in some filtering with a very long time constant.

Peter
Administrator
Shoreham EGKA, United Kingdom
15 Posts
This thread is locked. This means you can't add a response.
Sign in to add your message