Perhaps a little niche, but on the off chance, does anyone have any experience or recommendations on refurbishing a Luscombe Silvaire control column?

She still has the original column assembly which adds a slight play in the stick so looking at having a new one made or refurbing the old one (unlikely to deliver the desired result). She flies fine as is, but it could be a little sharper (despite the long aileron cables).

Without the parts or a photograph in front of me I can’t remember the exact details, but I went through this 10 years ago as a result of the same observation. A tiny bit of clearance at the base of the stick results in a noticeable dead zone at the grip. As I remember there’s more clearance in pitch because pitch control uses a plain pin and pushrod versus spherical rod end fitting or tensioned cables (as for the ailerons). Then there’s the stick itself which as I recall slides over another tube, or something similar with built in clearance. With some new parts and some selective fit assembly I was able to tighten it up considerably while staying within the original design, but a little slop remained. I imagine remade and accurately machined fittings would fix it, or a minor design change, but the clearance at the bottom would have to be completely eliminated given the way everything is magnified at the top of the stick.

Aside from that, what the Luscombe really needs is aileron spades, a A&P IA friend and I joke about me doing an STC as a project. They made the postwar sticks longer to lighten the aileron feel, but that also adds to the slop at the grip.

P.S. I remembered that in addition to the pin at the forward end of the elevator control pushrod, much of the fore-aft stick play on my project was derived from the pin at the aft end of the pushrod, and the rocker type mechanism under the seats that translates the rod motion to elevator push-pull cables. That’s a somewhat hard to reach part of the plane.

Any side-to-side (aileron) stick play will probably be in the control column itself.

Memory is slow, it’s been a while

Hope that’s of some help.

Thanks very much, that is very useful and agree about the aileron spades as an STC project!

I found a picture of another Luscombe’s assembly (not mine) and our estimate is that the pin as you mention has something to do with it coupled perhaps with the horizontal tube connecting the two sticks (on the far right in the image) is moving around a bit in the “brace” between the two sticks (apologies for the terrible terminology). The play is very slight but coupled with the long travel to the ailerons, takes away a slight crispness to the controls (then again, we are talking about a 1940’s aircraft here). We are thinking of doing this at the annual during the winter.

On the one hand, you don’t really notice it because you automatically compensate for it, on the other hand, you become aware of it and at 90 knots, you have time to think/notice things as you sloowwly get to your destination. The Luscombe flies fine as is (and is really enjoyable) so it is probably more for pilot “comfort”. 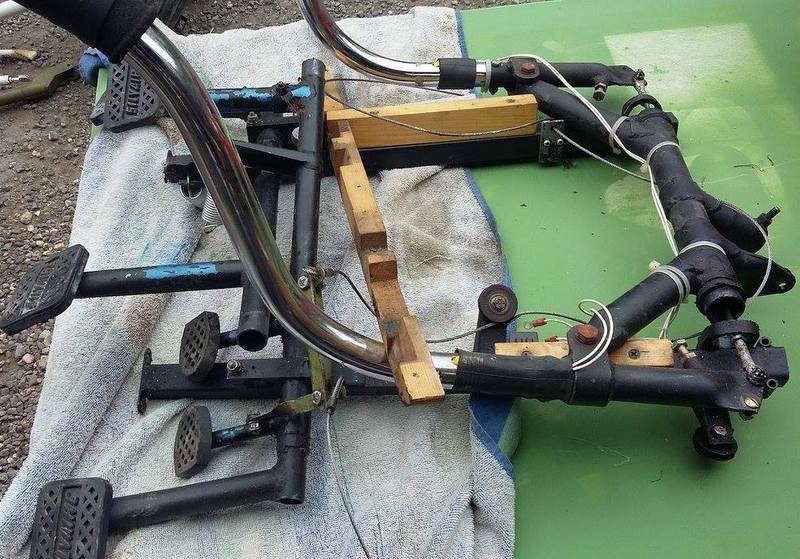 That photo looks familiar, and is helpful in recalling a few more things…

The first (just FWIW) is that I had a spare control assembly much like the one pictured and found that the assemblies as a whole were not interchangeable in terms of fit into the airframe. I believe they must’ve built the assemblies on the bench using limited tooling, then drilled the fuselages to match each individual control assembly.

Another point is that I had two different control stick interconnect rods, the “brace” part you mention, and they were different. One was like that in the photo, small in diameter, and if you pushed both sticks in the opposite direction (putting the rod in compression) it would buckle. While recognizing that you don’t often do that, and that tension in the aileron cable loop should prevent it anyway, I have to say it made me a bit uneasy, so I used the other one – which was tubular. Whether that was a factory change or a home made part, I don’t know.

Looking at the photo, you can see all the pivots where a tiny bit of clearance will contribute to a dead zone at the grip… Unless you are really serious and weld/remachine/ream all of them, including the elevator rocker assembly under the seat, it’ll never be perfect. The good part is that if clearance is held with reason, it doesn’t affect control much. I believe Don Luscombe and his merry band of engineering hangers on and student workers knew that

BTW, you may find that using close tolerance bolts you can tighten up the fits at the control stick pivots (the bolts with the rusty heads in the photo)

Make sure when you’re finished that the aileron cable tension is correctly set and that the ailerons are in the correct position. The aileron cables on a Luscombe are not properly set very tight, as demonstrated by examining the cable as it passes across the windshield area. The ailerons themselves should droop slightly on the ground because they will float upward a little in flight, acting against the relatively low tension in the interconnecting cable.

Finally, why is it that in my experience of rummaging through boxes of Luscombe parts, they have so often been painted light metallic blue??? A friend calls it ‘Oldsmobile Blue’. An echo from the sixties, I guess.

I’m easily amused by such things.

Silvaire
USA
5 Posts
This thread is locked. This means you can't add a response.
Sign in to add your message