Looking at all NOTAMs worldwide, one can create interesting statistics.

As of now there are

active NOTAMs. Who is the most active NOTAM issuer? Every NOTAM comes from a NOTAM Office (NOF). A country usually has one but can have multiple. The list of NOFs can be found on the Eurocontrol site.

For most countries, the first two letters of the NOF correspond to the ICAO country code. Let’s rank the countries worldwide.

The USA reserve the letter K and P for them, so let’s add them for fairness:

So we can see that the USA have the largest number of NOTAMs out there but a strong 2nd winner is Germany (ED) followed by France (LF) and Italy (LI). Russia (UU) is next, then surprisingly Poland (EP), Turkey (LT) and then with a lowly 970 NOTAMs Her Majesty’s Own Kingdom.

I think this shows that Germans like to issue NOTAMs for every BS detail while the Brits have mostly uncontrolled airspace and in general are more relaxed about when to issue a NOTAM.

A NOTAM contains a field called ItemA which is the ICAO identifier of the affecting entity, either airport or FIR. Let’s see what the scores are for FIRs:

Again, Germany beats the competition by a large margin with Langen and Bremen scoring at the top, only Munich lost to the Warsaw FIR. It’s really important to mention each windmill by name and inform the public that somebody left a chewing gum on the heliport of Boondocks Municipal Hospital.

Now let’s find out how many days in average a NOTAM has been around:

What’s the average validity duration of NOTAMs in days, ignoring the ones that are marked as PERM?

How many NOTAMs in the database will trigger in the future?

I’m not too surprised about France either

do you retrieve them all and store them in your own DB ?

I particularly like the security notams that Germany release for each country in the sand pit stating “potentially hazardous situations” . They could be efficient and publish one with applicable countries in it. Or better still recognise that people do, on occasion, turn on the news and don’t need to be reminded before each burger run that there is a war in Syria, Iraq, Iran, Lybia… bongo-bongo land

Oh and the other one I love in Germany, seen it for first time this year, are the “do not overly” notams due to “social events” in force for the summer period. E.g. over Feuchtwangen. I bet a federal politician lives there.

I am certainly no friend of bureaucracy and such like, but if you correlate these numbers with the population density and the density of airports, airways and navaids, then the statistics will look somewhat different.

How long does the data go back for? Would you be able to find out if there was an increase in the “OBSTACLE ERECTED” notams in the UK after the helicopter london incident (16 Jan 2013)?
https://en.wikipedia.org/wiki/Vauxhall_helicopter_crash

My instructor did say that he saw these pop up all over the place of the incident… but had no data to back his claim :)

If you have sleep troubles,you may exercise you brain by deciphering this: 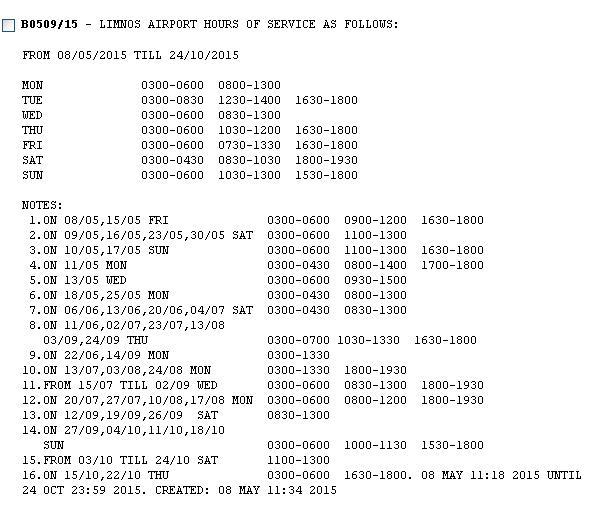 Or,see how precautionary an airport may become ,after litigations for randomly answering PPR requests,in absence of relevant NOTAM !

I often wondered about the bizzare opening hours of Greek Airports. 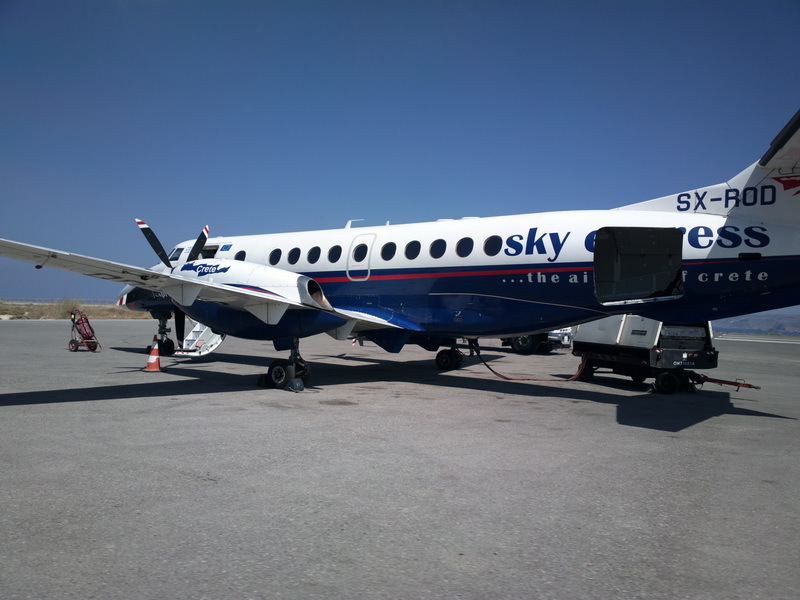 and (when they finished laughing at the registration) just creating a slot of 2-3hrs around the ETA/EOBT.

And to hell with anybody else who wants to fly there… which is commercially understandable in a short-term way but not if the staff sit there all day anyway.

On this trip we did 3 small islands: Leros Kalymnos and Ikaria and getting the timetables to line up was pretty hard – especially since one of them gave us duff data (all in the writeup).

We will do the same this September but this time it will be just two islands, one of which will be Milos.

Speaking of notams, what happened to the 1952 Greek/Turkish airspace dispute which used to take up pages of notams for any flight in Greece?

Did you take into account that in many countries, each NOTAM is published in two languages? If not, that would cut the polish, french or german numbers in half right away as compared to the US or the UK.

BTW, Germany will stop translating NOTAMs next year, if I am correct?

Rwy20
26 Posts
This thread is locked. This means you can't add a response.
Sign in to add your message