Onboard vs Downlink radar

We’ve discussed in the past how excellent the ADL system is, but how it should not be used for tactical avoidance of thunderstorms. This image (reposted with permission from the MMOPA forum) shows just why: 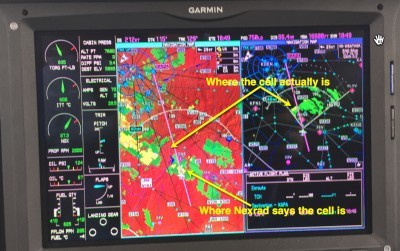 Also on the same discussion, someone answered a question I’ve had for a long time: downlink radar images have a time stamp, but what does it represent, the time the image was taken or the time the composite was generated (assuming there’s a delay between the two)? The answer seems to be the latter: the images are taken on a “need” basis, so more frequently in regions with active weather, but the composite is built on a schedule (and so potentially based on images which were not taken at the same time). The poster gives no source but it seems logical.

There is a good AOPA video on YouTube, from an incident where the pilot used a 5m IIRC old radar he got on his G1000 for the XM weather downlink, and got into a lot of trouble because by then he flew straight into the thick of the storm.

To me it seems common sense to not rely on fine-tuning your track based on downlink weather data. I mean it is not real time…

Bad weather in the downlink? Avoid the whole quadrant.

This thread seems to contradict the many posts here (search for “ADL”) by pilots who rely on it fully for TS avoidance in IMC.

It’s striking to me that on MMOPA where at least 75% of pilots have both solutions at their disposal, everyone insists on the limitations of downlink, especially instructors.

I guess the value of the ADL depends on your personal IFR limits. I for one don’t fly through fronts where TS are so close together that I live radar. For everything else, like isolated embedded TS is perfectly fine. I set the download on “automatic” and get a new picture (and a loop if wanted) every 15 minutes.

While it is very important to understand the general limitations and dangers of using data link radar there are very important differences between the US and Europe:

“Every 5 minutes, a script runs a GEMPAK program called nex2img. nex2img searches the on-disk data for current (within 15 minutes of runtime) products and then composites them into a large image.”
(https://mesonet.agron.iastate.edu/docs/nexrad_composites/)

In addition the NEXRAD is time stamped the moment it is published which is probably delayed another 3-4 minutes after they run the script.

This means a radar image time stamped 12:00 can in fact contain radar data which is about 20 minutes old. To make things worse they republish the image every 5 min and many pilots are lead to believe their data is much more up to date than it actually is.

In Europe the radar data is usually time stamped the moment of the last included meteorological measurement. This means in comparison to the NEXRAD all processing delay is not included in the timestamp.

The maximum age of the weather data included is not published but I spoke with German weather service and they try to include only data from the last 5 minutes.

→ So the actual quality of the radar data in Europe is at least as good or in some cases even better than in the US with a more honest timestamp. But still I get many requests if there is any way to get “better” data such as in the US. Americans are just better at selling stuff than we Europeans are…


This thread seems to contradict the many posts here (search for “ADL”) by pilots who rely on it fully for TS avoidance in IMC.

This thread is about tactical avoidance (or at least that’s what denopa wrote in the first post). I haven’t read anyone on EuroGA advocating or using the ADL system for tactical avoidance. Quite the opposite. For strategic avoidance, certainly!

We can argue that avoiding embedded isolated TS can be attempted tactically (if you just try to avoid it by the vertical extent, say 20nm) in which case you can land yourself in big trouble, running into the only TS around by aiming for the where it wasn’t 10 minutes ago. Strategic means avoiding the area altogether. Sometimes it’s not just a question of where has the stuff moved, it’s that some stuff just pops up fast enough to be dangerous yet not appear at all on the downlink. This happened to me once flying over the Cevennes towards Nimes, an area infamous for summer afternoon TS; thankfully I was VMC because when there’s nothing at all on the DL, i


It’s striking to me that on MMOPA where at least 75% of pilots have both solutions at their disposal, everyone insists on the limitations of downlink, especially instructors.

In the US they have far more convective weather and hence the limitations that Sebastian describes become even more pronounced.

JasonC
EGTK Oxford
31 Posts
This thread is locked. This means you can't add a response.
Sign in to add your message