The other day I went for a short flight in our C172S (180hk Lyc. IO-360-L2A engine). During the take-off roll, I noticed that the fuel flow was markedly higher than the green arc on the gauge. The aircraft is G1000 equipped and the FF gauge doesn’t have a scale so I don’t know the actual fuel flow. (You have to press buttons to get a numeric readout and I didn’t feel like doing that during the takeoff.)

The ground temperature was -10°C (ISA-25) and QNH 1023 giving a density altitude of about -3500 ft (airport elevation was essentially MSL). That would correspond to an air density about 10% higher than the density at 0 ft density altitude, so actual engine power would theoretically be that much higher as well (about 200 hp).

That got me thinking. Should I worry about overboosting the engine? Should I reduce power during the take-off roll to bring the fuel flow into the green arc? Since the aircraft has a fixed-pitch prop there is no MP gauge.

There was a marked temperature inversion so after 1-2 minutes (somewhere between 1000 and 2000 feet altitude) I got positive density altitude.

A particular consideration is that in the Lycoming data the engine power for the IO-360-L2A is given as 160 hk with an option of going up to 180 hk – so it feels that the margins are reduced from the start.

I think i would only care if rpm went out of the green, a lot. The engine should be designed to work perfectly under these conditions, and if minus 10 C was a problem then we would heard about that.
I’d enjoy the extra power :-)

My 150 hp Warrior climbs like a Cirrus (in the summer) in the winter. And with the SR22NA i saw climb rates up to 2500 fpm on cold days like that.

I think i would only care if rpm went out of the green, a lot

The fuel flow is something else – on an injected engine that will scale with the QNH and is fine. This isn’t “overboosting” BTW; that is a turbocharged engine term. Without a turbo the MP cannot exceed the outside air pressure.

There was certainly no engine overspeed. The rpm at take-off and climb speeds in normal conditions have a large margin to redline. (Btw, I’ve read that SB. The first time after an accidental engine overspeed when I was climbing on A/P with altitude arm and was distracted by ATC just as the aircraft was about to level off. Basically as long as you don’t exceed redline by more than 5% you don’t have to do anything other than taking steps to prevent it from happening again.)

This isn’t “overboosting” BTW; that is a turbocharged engine term. Without a turbo the MP cannot exceed the outside air pressure.

I know, of course the MP wasn’t above the outside air pressure. But the manifold air density was considerably higher than normal and in the end that’s the important factor and not the manifold pressure, isn’t it?

Hope I go this right… But I think you a are very wrong here.

The Cessna 172S fuel flow gauge has a green arc only up to 12 GPH. Above that, it is “white”, which does not mean it’s not supposed to go above that. Normal takeoff fuel flow is somewhere around 15-16 GPH I would estimate.

Here’s the analog gauge; on the G1000 it is essentially the same: 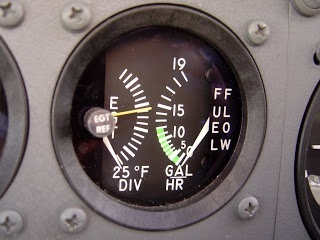 So, if this is the first time you noticed the fuel flow gauge going “out of the green”, then this would be disconcerting…


So, if this is the first time you noticed the fuel flow gauge going “out of the green”, then this would be disconcerting…

Usually, the FF is at the top of the green on takeoff. The green arc on the G1000 is not like the analogue gauge – on the G1000 it does not go down to zero.

But I may very well be wrong. It is usually not as cold as -10°C and I haven’t thought about this before.

But I think it’s an interesting discussion none the less.

As I understand it, overboosting on a turocharged engine relates to MP being greater than a particular value, which exceeds athmospheric pressure.

But if athmospheric pressure itself is greater than would be expected, then how is this different to the extra pressure being created by the turbocharger?

Is it simply due to the fact that engine manufacturers allow for very high athmospheric pressures when designing the engines? Or something to do with pressure outside the engine vs pressure inside?

But if athmospheric pressure itself is greater than would be expected, then how is this different to the extra pressure being created by the turbocharger?

You are right – no difference.

The policy on over revving is one which can be debated. Lyco seem to have a draconian policy, but homebuilders commonly over-rev (over-adjust their prop governors) their engines, sometimes by huge amounts. I have heard of IO540s, certified for say 2600rpm, revved to 3000rpm. (IO540 is same as IO360 but two more pots). You get a lot of extra HP – about rpm ^ 2 if the fuel servo is adjusted for the higher required fuel flow. A friendly US engine shop I know which builds these for the US Exp market says the engines come back really shagged well before TBO, but they don’t seem to blow up (usually).


The policy on over revving is one which can be debated.

Most of the time, the propeller is more limiting than the engine; so just reading engine manufacturer guidance on overrevving is only half the story…

tomjnx
LSZK, Switzerland
11 Posts
This thread is locked. This means you can't add a response.
Sign in to add your message

Holding brakes before takeoff... Does it make any difference?
Over weather on a cold day at FL210 with ADL120 help / first high level foray
Prolonged flight in IMC on alternate air?
Differences training