Below some pictures of a great day of VFR valley flying in Switzerland.

It was my first time flying in Switzerland. Being from The Netherlands, my experience with “Mountain Flying” is limited.
Flying below terrain is a sensation one has to get used to.

The weather was perfect: Good visibility and little wind.
I routed via the published GAFOR routes. That makes planning a lot easier: The minimum route altitude is known and the weather bulletin will tell you whether the route is open or not. 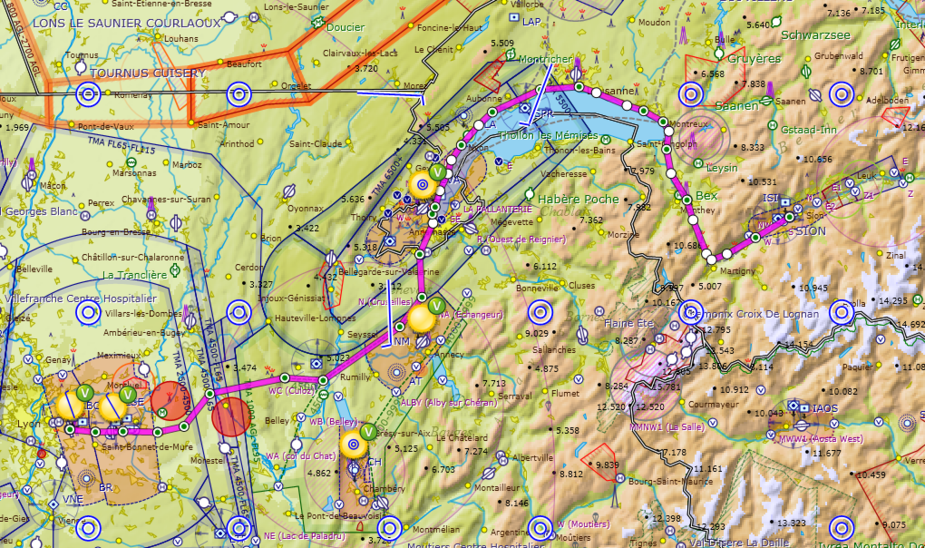 We departed Lyon Bron early morning after the fog disappeared. Conditions were still marginal VFR with low clouds.
We climbed through a hole in the clouds to VFR on Top: Over Lake Geneva. Our request to cross the Geneva CTR was denied and we had to stay clear of the TMA, so our actual flown route was via the South side of the lake. The entrance of the Rhone Valley, which leads to Sion LSGS: Sion is the home base of some interesting aircraft. This is a F+W C-3606 (nicknamed “Alpine Anteater”) that just landed. The Swiss Air Force was bashing circuits with a Pilatus PC21: A Swiss Air Ambulance parked at the apron: This leg routes via the Simplon pass to the Italian speaking part of Switzerland: We climbed to 9000ft for the Simplon pass crossing: Shall we turn left or right here? The TERRAIN feature on the G1000 is very useful… Thanks for sharing! Having learned to fly in flat terrain, too, I can imagine some of your feelings among those lofty mountains.

Great pictures! Looking forward to do some of that myself one day.

Indeed a scary feeling. But it would have been worse with an overcast that really keeps you in the valleys and then the decision about going left or right becomes special. Actually I thought about that earlier this week as I was passing over the same area at 20.000 ft scratching the tops.

I wonder how many people do fly into the wrong canyon and find it is too narrow to turn around, too late?

If you’re flying with just a map and a watch, theres a very real danger of flying into the wrong canyon.

With GPS navigation and a moving map which displays terrain, navigating the mountain routes becomes easy.

I haven’t tried it, but the Terrain Safe feature in Skydemon looks very neat: 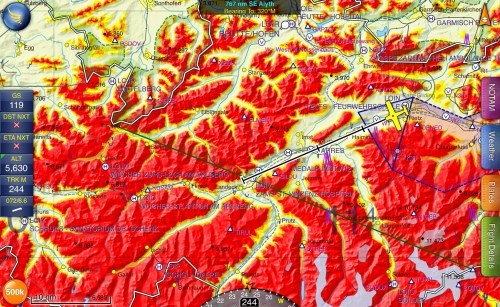 The L-4 artillery observer J3-65 Cub brought down at least one Messerchmitt 109 by leading it into a canyon – a more sophisticated understanding of his g corner radius of turn would have proved useful to the 109 pilot. The L-4s and Stinsons claimed a few kills during WW2, in addition to delivering more tons of artillery fire than the allied bombing campaigns.

You need to hug the side of the canyon to maximise your radius of turn, and obviously not keep going if you find yourself in a box canyon – probably you won’t out climb the terrain in a typical GA type. It happens fairly often in the mountain states in the US.

The Simplon pass going west is tricky, as the real pass looks like a monster box canyon, but in fact it is the optical illusion of the switch back, while if you keep going past Domodossola there is a sucker canyon which looks inviting but is in fact a box canyon, with the ridge at the end at around 11,000 feet plus.

I am not sure I would want my head in the cockpit interpreting a GPS while navigating passes, but appreciate the enhanced situational awareness these maps can provide.

I’m sure you meant minimise ;-)

I went down to Annemasse LFLI last year with a VFR-only pilot and ended up low-flying the last 45 minutes. You can see us sticking to the side of the valley. There was no option to climb safely so each time we came round a corner I was prepared to keep the turn going, roll out on a reciprocal and divert to Lyon.

A few seconds of video 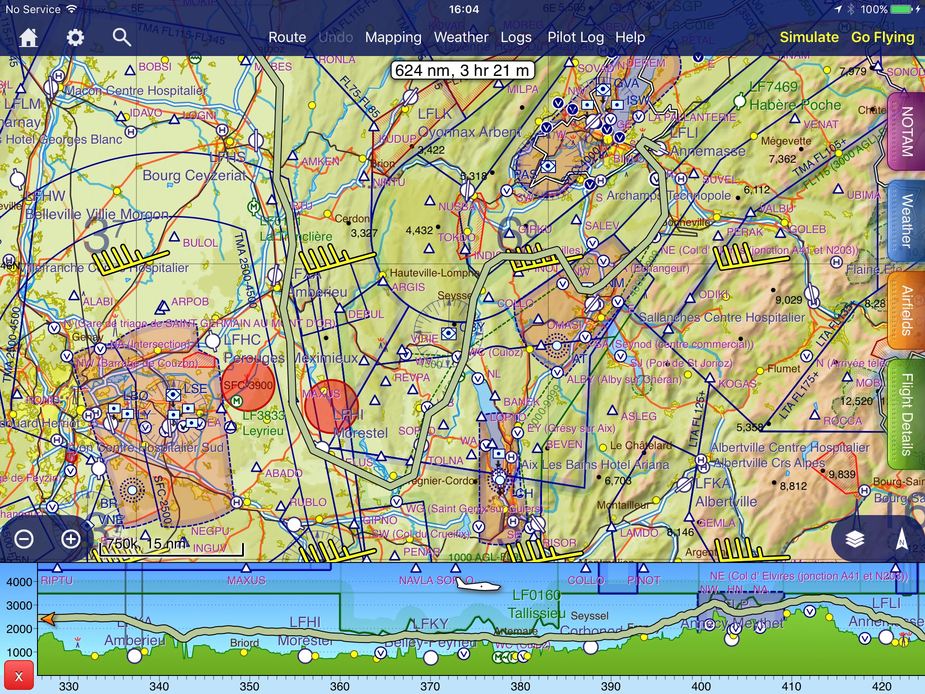 ) from Wangen-Lachen to Sion and back

I had no maps to speak of. I had the Jepp VFR charts but they didn’t show clearly the topography and the routes.

On the way there he flew with me. On the way back (he was collecting a PA28 from maintenance at Sion and we flew back in a loose formation) my Plan B, should I lose visual with him, was to climb straight up. I thought, in the big canyons, that would have been OK, going up through the fairly thin cloud cover…