Roll Steering - is there any point in practice, in Europe?

There is a long discussion on a US site about the KFC225, when fed from a Garmin GPS, dropping out of normal operating mode and reverting to the basic ROL (wings level and pitch hold) mode during an LPV approach, requiring some buttons to be pressed. It’s because the KFC225 doesn’t support a glideslope in GPS mode, so it has to be conned into thinking it is flying an ILS. Apparently Garmin had to do their GPS software that way to get the STC.

Not everybody is convinced it was the only way, and I happen to know of installations (in the USA, where LPV really does exist) where it doesn’t drop out.

However, central to the argument and to one proposed solution (which involves disregarding ARINC429 roll steering totally and using the KFC225 as a purely analog-input autopilot) is whether roll steering, and indeed even telling the autopilot it is being driven from a GPS at all, has any practical value.

Look at this ILS intercept That is with a KX155A feeding a SN3500 EHSI (via composite analog) and the SN3500 feeding the KFC225 via analog. No “roll steering” of any kind. And I was getting the same ILS intercepts before the SN3500 went in, though some fun and games were to be had adjusting the nulls on the KN72 piece of junk 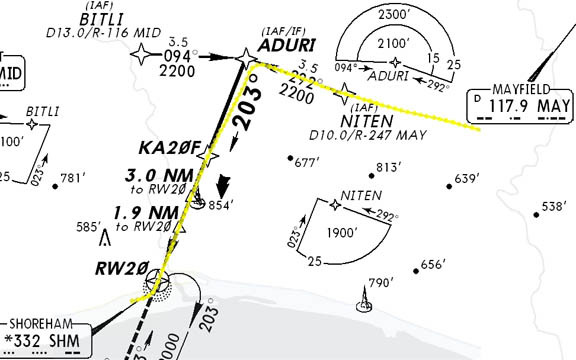 I am very happy with that too

And that is despite the KLN94 having an obvious mistake in its “predictive turn” behaviour – it always starts turning too early, and the amount by which it gets it wrong suggests the programmer made a simple error in geometry.

Obviously roll steering does a lot of other stuff e.g. flying a whole procedure hands-off… DME arcs, holding patterns, etc. And the lateral accuracy is tighter when the autopilot is driven via (in effect) its heading bug input, aggressively, as 429 roll steering does.

But (apart from selling the latest eye candy) what for?

Any pilot who is actually awake and can spell India Foxtrot Romeo can trivially fly any of these procedures just by twiddling the heading bug. The DME arc in the upper pic was done that way: a few degrees every 1/2 minute or so.

And there is a lot to be said for having a simple and seamless avionics system integration where avionics don’t do “funny stuff” which needs silly button presses which don’t do anything useful.

If or when I rip out the KLN94/KMD550 and install the GTN750, I will be doing it for LPV and PRNAV, not for flying a wind corrected hold

What is wrong with the above?

Roll steering is fantastic but not having it doesn’t render your avionics obsolete. I am glad that I have it, I like the precision but of the conventional setups, KLN94/KFC225 is probably one of the better. My previous autopilot would overshoot by quite a bit because it did not have support for predictive turns. Also it would take a lot longer to establish wind correction.

For certain I wouldn’t go back to a non GPSS equipped airplane.

For certain I wouldn’t go back to a non GPSS equipped airplane.

you would for sure – if the choice is to fly or not to fly, every aircraft that satisfies safety expectations for particular mission is good to fly.

How does the predictive turn work without roll steering in your installation? In a traditional installation with a GSP driven CDI and an autopilot in NAV tracking usually it will overfly the waypoint, then some cross track error buils up and it will reintercept the new track line.

In GNS530/KFC150/KCS55A setup without roll steering you get info on GNS on approaching waypoint. If you turn CDI immediately to next course, new track will be smoothly intercepted and kept.

How does the predictive turn work without roll steering in your installation? In a traditional installation with a GSP driven CDI and an autopilot in NAV tracking usually it will overfly the waypoint, then some cross track error buils up and it will reintercept the new track line.

That would be a very bad behaviour.

It would be what you would get if there was no “HSI course pointer”, or any equivalent thing, going to the autopilot. I suppose it’s possible but it would be a terrible bit of avionics wiring.

The way it is supposed to work in “classical” 1960s-plus systems (an HSI, etc) is that the HSI course pointer is used by the autopilot as the heading. So whichever the CP is pointing, the AP will turn onto that heading. In a zero wind situation that would be fine but with wind, what happens is that the off-track error builds up. So the autopilot uses the HSI bar deviation to adjust its heading, to take out the error.

On the 1990s King GPSs (KLN89, KLN94) the GPS monitors the ground speed and on the basis of that it switches the final approach track (ADURI-KA20F in the above pic) to become the active leg. At that instant, the flight plan data coming out of its RS232 port contains that leg also marked as the active leg, and if that data is going into an EHSI (or into any “higher” i.e. “glass” instrument) the course pointer will automatically flip to the new leg’s bearing, and the autopilot turns onto it.

So there isn’t an overshoot, unless you are flying towards ADURI at 300kt

If the GPS got the timing just right, the 90 degree turn would be perfect. But it turns too early… as you can see above. But it doesn’t matter because by the time you are at the FAF (KA20F) it is spot on, and it gets better on the way down.

The KLN94 applies the predictive turn behaviour to all turns, enroute, the lot. Most enroute turns are small-angle and the result is absolutely perfect.

What happens additionally on a published GPS/LNAV approach is that the deviation bar sensitivity is gradually increased. At 30nm to the airport it drops from 5nm FS (full scale) to 1nm FS and beyond the FAF it gradually increases from 1nm FS to 0.3nm FS.

What the above systems don’t give you is any great precision. You just get a turn to the next leg’s track, expressed as a heading. This works fine on the traditional GPS/LNAV approaches on which the turn onto the final approach track is 90 degrees, and since the widespread introduction of these approaches in the USA predates any widespread adoption of smart avionics, it’s obvious that they work fine. And we aren’t getting anything else in Europe! LPV still flies laterally the same way. So while precisse turns are “nice” they evidently aren’t necessary.

The real problem is flying whole procedures with turns e.g. holds and DME arcs. There is no reason why you could not fly any of these just by the GPS outputting the equivalent sequence of legs. It’s obvious that you could fly a perfect DME arc if it was broken up into say 1nm legs. Holds are different because a “classical” hold is meant to be perfect only on the track to the holding fix, and the rest is meant to be rate-1 turns etc etc. I am sure it would be completely adequate. But for some reason nobody (in light GA avionics) has done that. Anyway I have never seen it. All the modern systems which can fly full procedures (e.g. all of this commencing at SAM as the “IAF” and flying the whole thing hands-off, all the way to the MAP) do it via a mechanism called roll steering. The way RS works is that the autopilot is fed directly from the GPS, via a digital data stream called ARINC 429, which way it should turn.

If you have an autopilot which can’t take in 429 data, there are converters which convert 429 into a faked heading bug signal and the result is the same.

What I was getting at in my original post is that any of these “full” procedures are trivial to fly just by manually turning the heading bug on the HSI. If you get RS, that’s great, but I can’t see the point of spending serious money on it.

What I was getting at in my original post is that any of these “full” procedures are trivial to fly just by manually turning the heading bug on the HSI. If you get RS, that’s great, but I can’t see the point of spending serious money on it.

There are people using the same argument for not getting an autopilot at all. We can live without most of modern technology if we have to. I agree that in your case I would not change anything at all.

There are people using the same argument for not getting an autopilot at all.

Not having an autopilot is a factor of ten on the pilot workload, so not a comparison.

Following CDI guidance is a poor method of navigation. The airlines and much of corporate aircraft have gone to FMS that provide roll steering. I hate flying in aircraft not equipped with it and would never own an airplane without that capability.

At that instant, the flight plan data coming out of its RS232 port contains that leg also marked as the active leg, and if that data is going into an EHSI (or into any “higher” i.e. “glass” instrument) the course pointer will automatically flip to the new leg’s bearing, and the autopilot turns onto it.

Peter, so your current installation does the turn anticipation by the fact that the GPS will activate the next leg before raching the waypoint. Now you either are very quick in a manual system turning the needle of the HSI or you have an EHSI which does the job for you. Is that right?

Concerning real roll steering I think there a two classes of systems. Either the GPS generates ARINC 429 roll information which is fed directly to your autopilot or converted into an analog pseudo heading bug signal for older autopilots.

The second option is that the GPS outputs the flightplan data as RS232 and either the autopilot or a separate box generating the pseudo heading bug information takes this flight plan data to calculate when to turn.

That beeing said proper GPS roll steering is a great feature and compared to many other upgrades is not that expensive after all. Sure you can do the job yourself with the heading bug but experience shows you will fly much more precise beeing on roll steering.

Sebastian G
www.ing-golze.de
EDAZ
12 Posts
This thread is locked. This means you can't add a response.
Sign in to add your message