To my point if you can’t play guitar for more than 10h/year you can at least listen, if you have no money/time to listen it will be problematic indeed ;)


I would love to have a higher currency, but anything over 10 hrs/year is unrealistic under the current circumstances.

In road travel we (and so do the insurers at least in Germany) treat everyone within their first two years as “beginner” who has a significantly higher risk of causing an accident due to an own mistake. In those 2 years they drive on average just north of 20k km – or about 300hrs.

At 10hr/yr it would take you 30 years to reach the same level of experience – not accounting for the things you “forget” during longer times of inactivity.

Even more frustrating, in manufacturing science we say that a (pre-skilled) worker needs to repeat a task about 3.000 – 4.000 times before we can expect real proficiency – again these repetitions performed in weeks not stretched over the entire lifetime – if you talk to a real Japanese Sushi master he would tell you it takes many more repetitions before you can cut a tuna sashimi well enough to call yourself a master. Comparing this with the number of landings I will have performed during my lifetime …

On the positive side: One doesn’t forget everything as soon as one stops practice. For an experienced Pilot (let’s say total time >>500hrs.) it doesn’t hurt so much if a year or two there’s not the time or the money to fly more than these 10 hrs/yr. With just a little bit of extra training he will be up to his former abilities pretty fast.

If I, however, for a longer period of time can only spend 10 hrs/yr on flying, I would seriously consider knitting or chess as more adequate pastimes (I will not become good at any of them either, but it doesn’t matter too much …).

Divided the accidents by capita in each countrey and sorted the list. This gives a different picture. 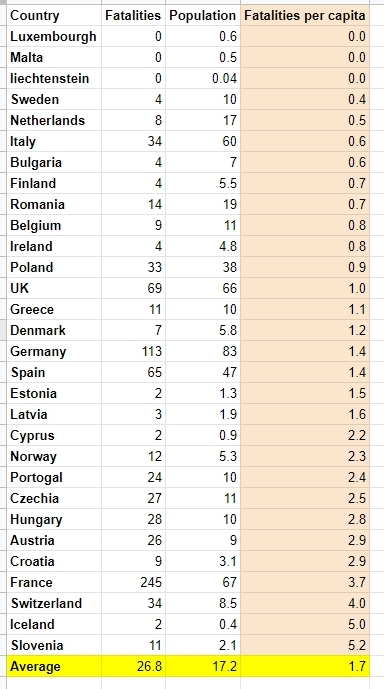 And putting this into perspective. On average, each year 1.7 person per million citizen in Europe dies in a GA accident. This is nothing compared with just about any other activity you can possibly do. Of course per flight hour, it is high, but then we need more detailed information, like how many persons each year fly GA aircraft, and how much each person flies.

Interesting, but again rather meaningless as the pilot population relative to the general population varies significantly between countries. What we’d need to know is the active pilot population of each country plus the hours flown but that’s an argument we’ve had several times on here and nobody seems to really know.

Does germany include UL pilots (they have a national sport flying license)?


Interesting, but again rather meaningless as the pilot population relative to the general population varies significantly between countries.

How can you say that when nobody knows? I think it’s reasonable to assume a rather equal distribution of GA pilots throughout Europe.

Thanks Lesving. Remember this number is for a 5 year period, not per year.
Iceland is misleading because with 2 fatalities in 5 years, they seldom have a crash.


Unfortunately these results are well in line with the long term traditional “GA pilot death paradox”: We are extremely anxious about engine failures and mid airs, but in reality we kill ourselves with risky flying and stupid decision making.

How do you know that there aren’t two different groups here: one group that is prone to risky flying and stupid decision making leading to loss of control and CFIT type accidents; and a separate group that is less prone to those things due to being more thoughtful about these things (such as the pilots who are always trying to assess and improve themselves by frequenting forums perhaps), and that is extremely anxious about engine failures and mid airs?

It might be that both concerns are correct because pilots aren’t all the same. Is there any evidence that this isn’t the case? If not, then I don’t think it’s necessarily correct to dismiss concerns about engine failures and mid airs.

Yes, the sample size is too small in this case. These numbers could mean anything or nothing. Not only quantity but quality of data is needed.

I think it’s reasonable to assume a rather equal distribution of GA pilots throughout Europe.

Definitely this is not the case. The % of pilots varies greatly according to the environment. For example Greece has only of the order of 200 PPLs – despite having a vastly greater utility value in GA than anywhere else in Europe. It’s a poor country…

Re Switzerland and France – is there any evidence that the extra accidents are terrain related?

I also maintain that there are significant cultural factors which result in most pilots flying a fairly narrow mission profile, and this is true in each country.

And for sure there are pilots who are more diligent than others.

Peter
Administrator
Shoreham EGKA, United Kingdom
177 Posts
This thread is locked. This means you can't add a response.
Sign in to add your message