If I come to this meetup, I would probably not fly to LIPV (grass of unknown condition/suitability) but fly to Padova LIPU, and get a train to Venice itself.

I don’t suppose anything will be happening at Lido anyway; people tend to get a boat across the water. 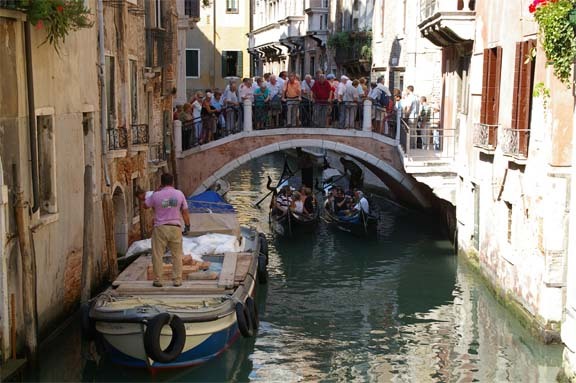 For staying, meeting, hotels etc the Lido is much better, I think. I would definitely not stay in the center but on the Lido. The runway is good, many german pilots (TB20, C210, Mooney, Cirrus) have reported that the rwy is no problem.

Venezia can be quiet enough, but one must then avoid the tourist season – photo is from quite close to Piazza San Marco – but in February. To be avoided indeed, in tourist season, and that must last till mid September at least. I was there 2 years ago around November, and it was very bearable with tourists. A few around, but not packed sardine and easy to get tables at restaurants etc. Anything during the industrial holidays time from June to mid Sept looks like it could be very painful, however. I have to say though, as jaded as I normally am with tourist attractions, Venice still impressed me to the core. What a place.

I’d love to land the new Turbo Commander at Lido!

I flew into LIPV at the beginning of August, 2013, on the way home from a trip to Greece with a group of Swiss antique aircraft. The airport is nice and very useable. The runway is grass but long enough at 995m and was in good shape at that time. There is customs and avgas. The only negative element is that the customs are not very friendly….. Do you speak English? “No, this is Italy and we speak Italian here”. They went through all out luggage. But the service is fine.

Lido is much quieter than the centre of Venice, with nice welcoming hotels and friendly shops near the water “bus stop”. Taxi rides from the airport are short and not too expensive.

Are there any dodgy grass/concrete transitions (prop strike risk) or stones/rocks?

I have not yet been to LIPV with the ST10, which has a prop ground clearance comparable to a Mooney. It was never any problem with C172, DA40 and DA42.

The surface is reasonably flat. No stones or concrete in my memory.

Regarding tourists: Even in high season, Venice is bearable in the mornings and evenings. A large part of the crowd are one-day-visitors from the resort towns on the Adriatic coast. The part of the Lido around the airport is always very quiet, with lots of old trees, art deco buildings in all states from completely overgrown to recently renovated …

I would like to share a precautionary tale about what happened to me when I flew to Lido earlier this year. As part of a summer tour, I flew to Vilshofen – Pula – Dubrovnik – Lido – Eggenfelden and back, as I’d come from Dubrovnik (Croatia not being part of the Schengen agreement) I had two officials waiting from the Immigration department to check my passport and another two from the Finance Ministry to check I wasn’t smuggling money.

What made it ridiculous was that the finance officials were only interested in looking in my overnight bag and my wallet – once they’d checked the bags, they buggered off. No-one went out to the aircraft to see if I’d left anything on board – apart from me, after all checks had been completed, I returned to the aircraft to collect my sunglasses, could have easily picked up smuggled cash then…. So to make things easy, fly into Italy via (eg) Slovenia, which is a signatory to Schengen….

What pissed me off was that the immigration officials copied ALL the details from my passport – long hand – onto a piece of paper. Nothing wrong with that, but upon returning from getting my sunglasses from the plane, I walked into the briefing room, went to get a bottle of water from the vending machine there and noted a piece of paper on the floor next to the bin. What caught my eye was my surname.

I bent down to pick it up and sure enough, ALL of my details were there, on that piece of paper. Obviously the officials were trying to be “efficient” and check everything but afterwards, in typical Italian style, just tossed the piece of paper, regardless of the fact that someone could have stolen my identity with that information. Really got me annoyed…..

However the next day spent in Venice and the day after flying along the Brenner back into Germany made up for it…..

These kind of incidents do happen everywhere these days, I’d be hesitant to single out Venice Lido for that. I had similar experiences in Germany, repeatedly, and in France. Free after the words “give a man power and he will abuse it”. Bad, but we have to live with it. Italian police and tax enforcement have been known to overstep legality many times in recent years including ransacking Italian property on foreign ground and almost ruining some of the nicer ski resorts in Italy with their omnipresence, but I understand that this has slowly started to subside now. It would not keep me from flying there, especcialy places which have good reviews from everyone who’s been there.

Lido is one of those. I’d fly there without hesitation, actually good to read that they do have customs. I only have heard good comments about this field, including good runway conditons and facilities. Should not be a problem for most airplanes. So yes, I’d be interested to come.

Mooney Driver
LSZH, Switzerland
78 Posts
This thread is locked. This means you can't add a response.
Sign in to add your message