I have for many years flown with the offerings from Skyforce and think it is time to change. I use Skydemon in house for flight planning, notams etc. So in the cockpit is it really as good as my PC based Skydemon. Does it require an external GPS aerial, indeed is there a port for such an aerial? Any information/comments would be much appreciated. Thanks

Just replaced my Garmin GPSMap96C with one of the newer Skydemon units this year, and have since flown about 30 hrs with it. I plan on my home PC, then transfer routes, weather (at the time of the sync) and Notam info (also current at the time of sync) to the mobile unit, and go flying. The online/web browser version is also great - means you can log in and plan/even transfer planned routes using a remote PC or laptop whilst you are away.

I particularly like not having to worry about map currency (though I do also carry the paper CAA charts - indeed at least draw a line on it), the battery life, the display and the choice of real-time map/chart types. I find it to be a breath of fresh air compared to Garmin.

I too wondered about the need for an external antenna (my Garmin needed one but there does not seem to be any connection for one on the Skydemon btw), but it's never been a problem.

Having never used Skyforce I can't make the comparison but I have found the transition to Skydemon smooth and not too steep a learning curve. I've been in touch with Skydemon about some suggested feature-tweaks and they seem to be listening - or at least keeping a list of requests.

The 'annual subscription' is a bit of a lump to swallow, but if it means the s/w and charts get updated regularly, then I acceed.

I use the iPAD version (if that helps) and I cant fault it. I have the 3G version but use an external GPS. I use it as my primary planning tool these days but transfer my route to a CAA laminated charts to check the fine detail. I also still prefer to do Notams on the AIS website. The SkyDemon PLOG is good in that it shows RNAV bearings to waypoints, but I rarely refer to the PLOG in the air.

I like that you can sync a route to the cloud so it can be uploaded and downloaded to any of your SkyDemon devices, and its fun to see the trail it keeps. You can tell which bits were under the command of the autopilot ;-)

Personally I wouldnt by a SkyDemon mobile device (not for £500 odd), instead I'd get an iPad mini and use that.

PA - does the Ipad with a GPS aerial update the Skydemon app as you are on the move? Presumably if so you do not need wifi for keeping up to date.

Agree with PiperArcher that the iPad mini with Skydemon installed would seem to be a good solution - if it had been available at the time I'd have bought that. The 3G connectivity is an advantage that my Mobile does not have.

does the Ipad with a GPS aerial update the Skydemon app as you are on the move?

Once I am ready to go, I switch the airplane mode on. Then you know your GPS signal is coming from the external device, and you avoid getting the occoasional data error message which can appear on the screen if there is a dodgy METAR or something.

but I still think it is a real shame that the app cannot have an explicit switch to use a specific (internal, or specific external) GPS.

I've mentioned this before ... my experience is that the internal GPS on an Ipad2 is unreliable in flight. I have the XGPS150 which works really well, but it is yet another gadget to keep charged up.

I absolutely love SkyDemon for flight planning - both on PC and iPad. However, I'm not so keen on using it in the air. I just find it a bit fiddly despite using it on the large iPad screen.

I use a Garmin 695, with routes uploaded from SkyDemon and find that this works superbly. Perhaps I just need to spend more time with SkyDemon.

I haven't experienced any issues with the iPad internal GPS whilst flying. It does take some time to acquire a fix, especially if there are no WiFi routers within range, but I don't consider this to be an issue as it's normally started whilst still on the ground.

I'm not so keen on using it in the air. I just find it a bit fiddly despite using it on the large iPad screen.

Im sort of with you on that. Depending on the zoom level, certain features (e.g. airspace, towns, town names) can be in or out of view. Also, I realised you can 'hide' certain features xxxx feet below or above you when in navigation mode. Also in planning mode, you can set some limits.

For example, I was planning to climb out North from the Royston area up to 8000 ft into the open FIR area. I knew about the 2500' LTMA area immediately above me at the time, and the airspace up to 4500' beyond Royston, and the airspace beyond that up to '5500 ft. But while still at 2300', the 4500' and 5500' ft pieces of airspace were missing from the SkyDemon display. Sure, some warning would have flashed had I climbed neared the airspace, but one should know where your heading before you get there. Thats not a fault of SkyDemon, but my tips would be:

The other day I was flying with a friend who uses SD on his Ipad.

We were in Class G and got very close to doing a fairly bad CAS bust.

I knew the area and was watching things generally, but noticed that the Class A (London TMA) airspace boundary was shown as a thin line when we were close to it and then got redrawn as the more normal thick line after we turned away and flew a few miles away from it.

Without having recorded the details (or better still done a video of the display) I can't offer an explanation, but it certainly made me decide to stay with a more conventional Ipad app which simply runs the CAA "printed" chart. CAS depiction should not auto-declutter unless you have changed your altitude, IMHO.

The other thing I noticed was this 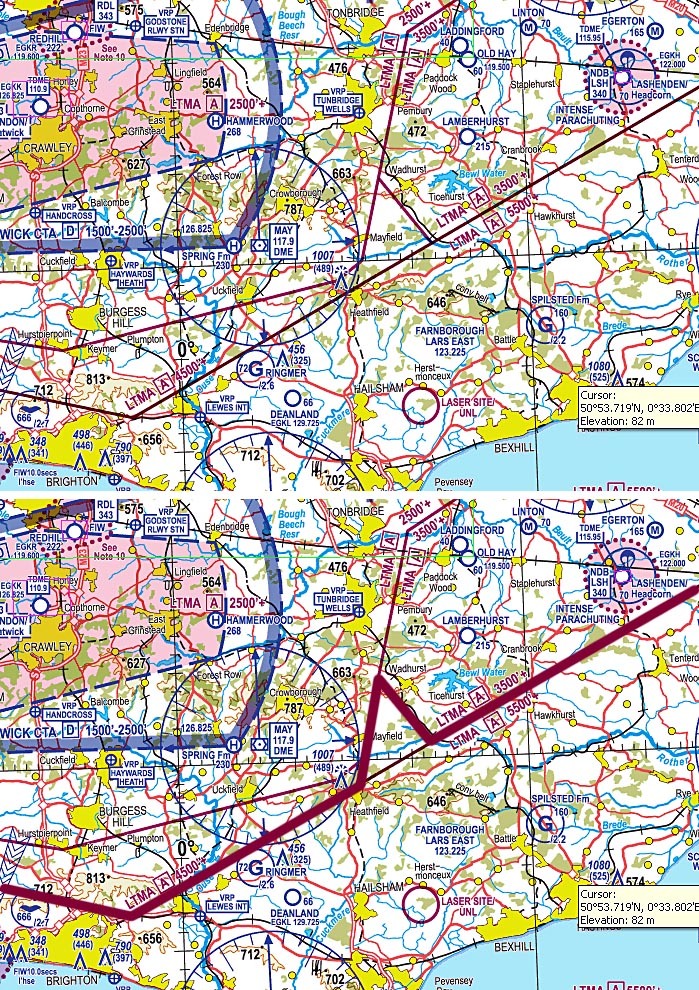 The upper image shows a piece of the 1:500k CAA chart.

The lower image shows where SD drew the CAS boundary, during the above flight, using its "thicker line" representation.

Can anybody see how the thick line, where it kinks up to the east of the MAY VOR, could be correct - ever and under any circumstances? We both looked at it during the flight and compared it with the printed chart, and neither of us could see where that kink came from.

Has the CAA changed the airspace, so where the word "Mayfield" is, the base of Class A is 5500ft?

Peter
Administrator
Shoreham EGKA, United Kingdom
381 Posts
This thread is locked. This means you can't add a response.
Sign in to add your message