Now that the audio checklist for the CitationJet was mentioned on COPA (a $ 8000 option) i thought I’d show you what one of my side projects was this year ;-)

For the last year I have been developing a new checklist app. It has a very different concept to what you have seen until now, and i can’t wait to have the last bugs fixed and present the finsihed app here.

The first version will be for Cirrus SR22-G2 and -G3,and actually I developed the idea when i realized that i do not want to use the MFD for checklists in many phases of the flight (traffic, weather …). And then my kids always connceted their iPhones to the BOSE’s on the rear seat …

Other airplanes available in V1.0 will be the C-172, Piper Warrior and Archer. The plan is to cover most of the typical GA planes. But that will take some time.

Like some of you i will rather have the map, charts and engine data on the MFD – and not waste the MFD for checklists.

I also realized that i don’t want to go back to paper checklists.

smartCHECK is an iPad and iPhone app that will sort all your checklists on the mobile desktop not by type (normal, abnormal, emergency) but by flight situation detected by GPS.

Only the checklists that might (!) be relevant to your flight situation (ground, taxi, takeoff …) will be shown as square tiles on your iPad, blue tiles for normal checklists, yellow ones for abnormal, red for emergency.

With a single tap the checklist is opened and if you have connected your iPad to your headset with a 3.5 mm stereo cable the checklist will be read to you by a very natural sounding synthetic voice.

- set timer and voice tells you to switch tanks (timer starts with completion of engine start cl)
- record the oil status of your engine at preflight + hours + added oil and the app will create a log and tell you what the oil consumption per hour for your last flights was. (V2 will have a graph showing consumption)

smartCHECK prototype displaying Checklist group “GROUND”. The normal checklists are blue tiles, the red tiles are emergency checklists. Only the checklists that might be relevant for this situation are shown in the ground group (like “engine start” and “engine fire at start”. There are no abnormal checklists (which would be yellow tiles) for ground 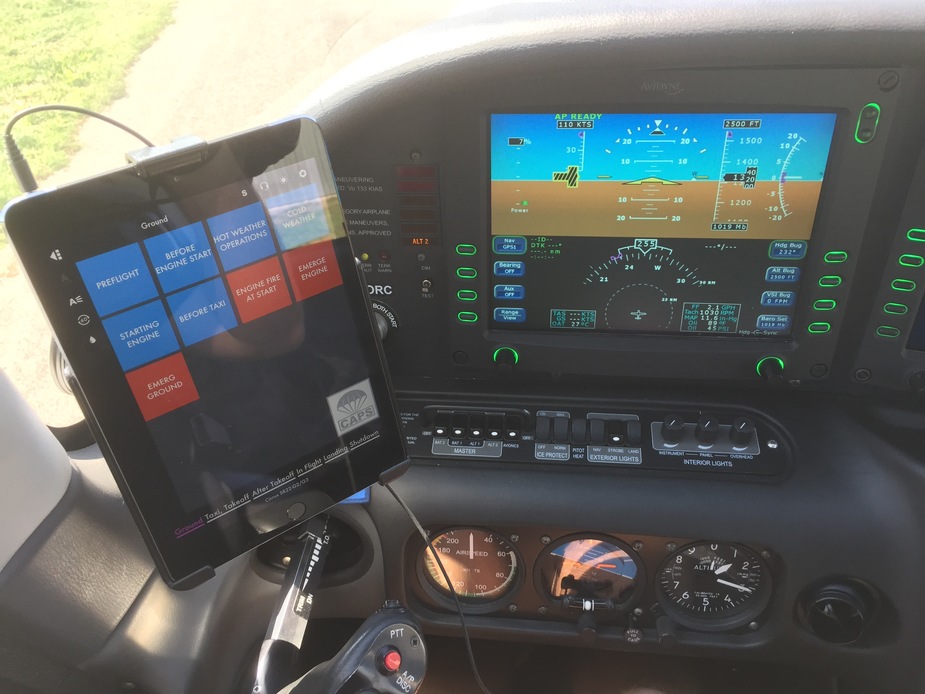 The Cirrus version has a CAPS symbol in the lower right corner of the screen which is grey on the ground and contains the CAPS checklist. The symbol changes to RED once the aircraft is 500 ft above the ground. 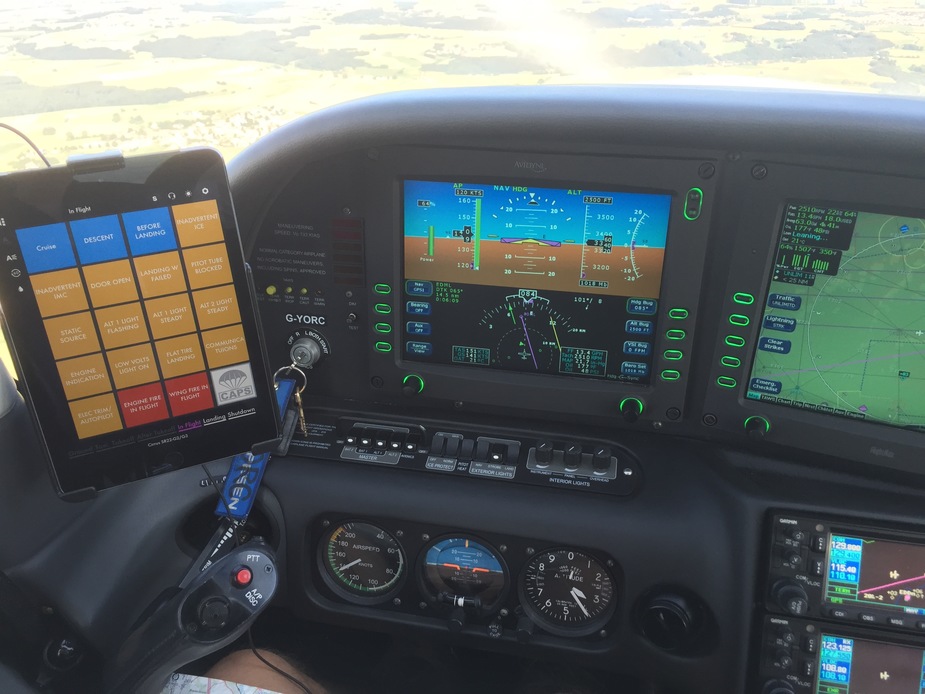 The app automatically forwards some of the checklist groups, e.g,: When the airplane starts moving it switches from the GROUND to the TAXI and BEFORE TAKEOFF group. When the airplane accelerates beyond 35 kts GS the AFTER TAKEOFF group is shown. The next groups have to be selected manually but later versions will take care of that too. Also in a later version the AFTER TO checklist will be read automatically when certain criteria are met (like 500 ft AGL)

When you tap on a tile the checklist opens. They look like this: 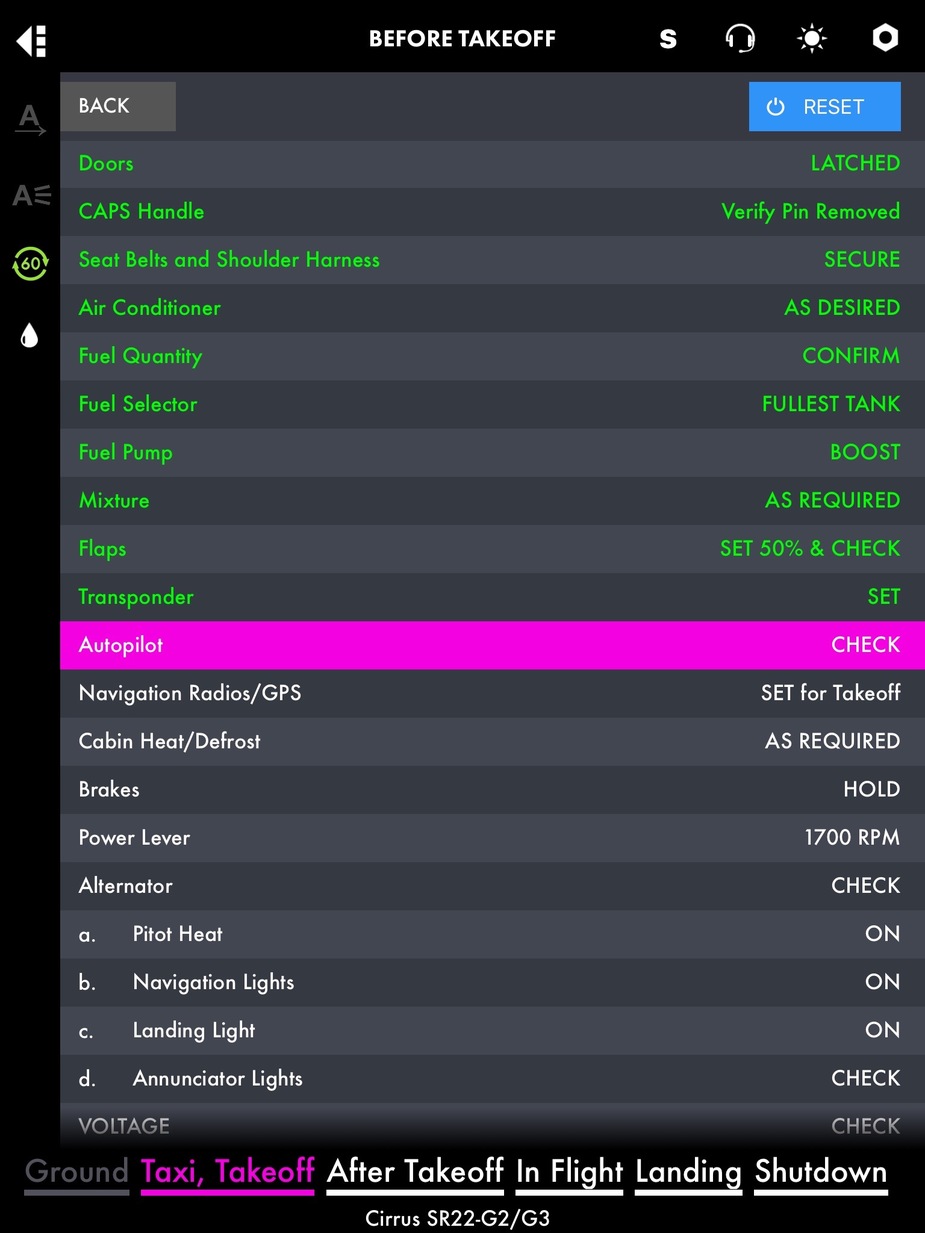 a) AUTO MODE: Once the checklist is open the synthetic voice starts reading the checklist (3 reading speeds available). If you tap anywhere one the screen while the checklist is beeing read it stops. Another tap and it continues. A tap with two fingers lets you jump to a certain line

b) MANUAL MODE: The checklist opens and with every tap on the screen the voice reads one item.

c) VOICE OFF: just tap on the screen to go to the next item, almost like on the MFD but better becasue you can tap anywhere on the screen.

So we are getting ‘Nagging Nelly’ in a Cessna – wooohoooo

Seriously – sounds interesting. Can it do challenge and response, such as once it’s read an item you have to tap that line to verify?

Bonanza: will be one of the first types after V1.0. It just takes a little time to convert the checklists

Sounds good. It would be great if it can be customised.. Am I asking too much here?
Silly little things that made me make my own checklist, like ‘Phone on Airplane Mode’, ‘Hangar doors closed’ and some items if there are pax on board..

Of course you can edit every checklist. You can ADD items, delete items and move them around inside the checklist.

What you cannot do is modify the checklist groups: GROUND, TAXI and TAKEOFF, AFTER TAKEOFF, IN FLIGHT, LANDING, SHUTDOWN.

All Checklists (from the 3 categories NORMAL, ABNORMAL and EMERGENCY) for a type will be put in these groups which are (partyL GPS driven

If I can be of any assistance with the POH of our Bonanza B36TC, just let me know.

You actually could! Although I do have a POH of a B36TC i am not sure how old it is, or what version. Do you have a complete checklist set, with all abnormal and emergency checklists?

What about lite version just reminding landing gear down when (let’s say) below Vfe, 0.5 nm from threshold, within 30deg of centerline and not climbing?

Might I suggest though that CAPS and the “red” items are at the top of the inflight pages as high criticality items?

If you look at a QRH for a type with EICAS, the RED checklists are the most accessible.

Josh
London area
135 Posts
This thread is locked. This means you can't add a response.
Sign in to add your message

What on your aircraft could kill you?
Would you or do you takeoff above MTOM?
Garmin Aviation Checklist Editor
Garmin Pilot (merged)