Some UK stats on CAS busts

This is from the last FTN – a flight training trade magazine: 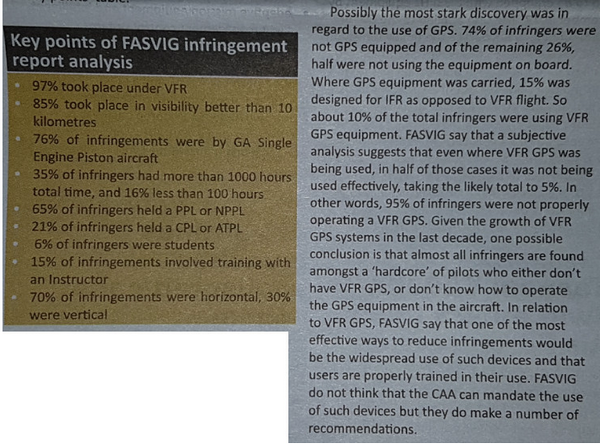 My view has always been that most people who get lost are not using a GPS. They are – at best – still using the WW1 methods taught in the PPL. But this is the first time I have seen clear evidence supporting this.

Also very telling is the “hardcore of pilots” comment. It’s not hard to work out how this works.

It is really astonishing, and damning at the same time.

The two-yearly PPL validation gets signed off so long as the instructor survives the flight.

I dunno, there’s something about NATS whole elitist approach to this that has always rubbed me the wrong way. It’s again a reaffirmation and a point of view that they always consider GA to be a total nuisance. Between the lines you can clearly read what they really think: “if it weren’t for those pesky weekend warrior idiots, we, the professionals would have it much easier”. Well, guess what, if it weren’t for all these idiots in GA airplanes, there wouldn’t be any professionals. It’s not like GA is the only ones messing up – happens all the time at all levels. Maybe I’m reading them wrong, but there’s a very clear sense of us vs them in all their stuff. Get over it and be a professional – serve GA exactly the same way you serve the big boys and the problem goes away. Inclusion, not exclusion.

This is a joint CAA/NATS project.

It’s hard to argue the line that GA should be allowed to bust CAS.

Especially when you get evidence like what I posted which is IMHO extremely damning. It not only makes the PPL training business look pretty bad – though to be fair their business mandate is to teach the official syllabus, not to produce pilots who can fly A to B. Cynical, sure, but that’s the bottom line. This isn’t the RAF where they teach them to fly, drop a bomb somewhere (etc) and come back, otherwise a £100M plane and a pilot (who cost them £8M to train) get wasted.

It also drives the question of what to do about the revalidation system which is clearly ineffective.

The acknowledgement that GPS can’t be mandated is just hilarious. I am not disagreeing with it as a statement of reality, but it is still hilarious, viewed against the 1000 CAS busts a year, of which IIRC about 300 were at the level at which CAT departures get shut own until the chap bimbles out of the airspace.

What GPS producer sponsored that “research”?

This whole ‘CAS Bust’ thing seems to be largely a UK problem. Let me guess a few reasons:
- as Adam says, attitude
- totally inadequate training. This may well have changed now, but when I did my UK license (conversion from FAA), I wasn’t even allowed to use the VOR and NDB that were installed in the airplane! Seriously, navigating by stopwatch and E6B wind correction in this day and age is laughable (for the record – I had a good laugh and passed on first test). Don’t even mention GPS….
- absurd airspace. I don’t think there is any other country with such a f•cked up airspace structure
- inadequate controller training. Here in the L.A. area – one of the busiest worldwide – the controllers are perfectly capable of handling an A380 and a C172 on the same frequency in the same airspace. In the UK they sh*t themselves when a SEP gets even close to one of their holy shrines, a.k.a. airports.

I agree. This is something we only hear about, and it is always from the UK.


This whole ‘CAS Bust’ thing seems to be largely a UK problem.

There have been campaigns about airspace infringements in Switzerland and Germany and as we can see from one of the links on the swiss website, it may be grounded in a Eurocontrol initiative.

It seems to be a topic that gets drummed up regularly in certain countries. Not to say it isn’t a real problem and everything possible should be done to avoid it.

When it comes to statistics about GPS use, there might be a bias that comes from the way these things are investigated. The pilot gets questioned on how this could happen, and of course he needs to be careful about what to say in order to minimize the punishment. It is much easier to argue that during visual, conventional stopwatch navigation you unfortunately missed a turning point or mistook some feature on the ground, than to admit that you had a GPS onboard but flew right into some CAS anyway due to carelessness or being distracted or not using your equipment properly. That might account for some underreporting of GPS use in these cases.

The latest AOPA magazine in the UK has a good article on the subject by David Wood, Head of Training at Old Sarum.

I confess I used to be a refusenik but pocketfms/easyVFR made me a believer. When I am close to CAS I am using my Garmin 196 and a mini iPad with bad elf lightning connector and easyVFR – plus mark one eyeball and the chart. The mini iPad is not on all the time but gets accessed near bottlenecks of CAS, mainly under the London TMA.


The mini iPad is not on all the time but gets accessed near bottlenecks of CAS, mainly under the London TMA.

With all due respect, isn’t exactly that the problem? If you don’t use your equipment regularly and consistently, how can you be sure you know how to operate it correctly when you need it? How will you know its quirks (they all have some) and failure modes?

Robert – that’s a good leader about the problem. The huge, almost insane “safe zone” put around an infringer is so disruptive and disproportionate that it begs the question that he poses: maybe the problem is ATC safe zones sizes?

AdamFrisch
KEMT
49 Posts
This thread is locked. This means you can't add a response.
Sign in to add your message