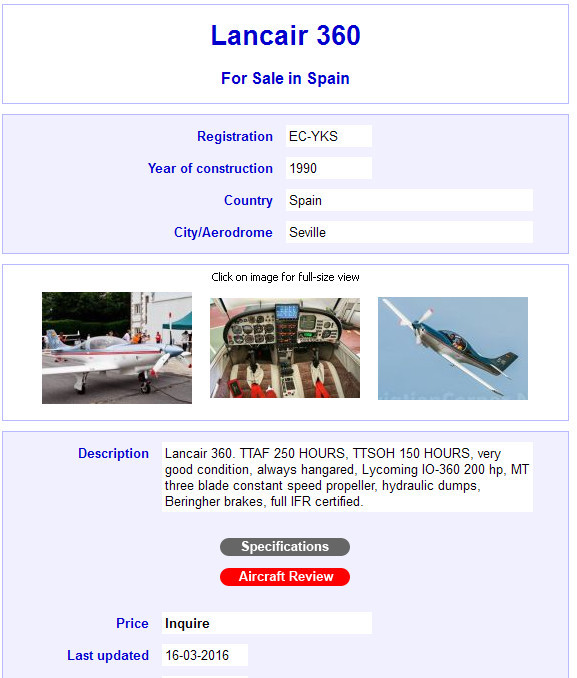 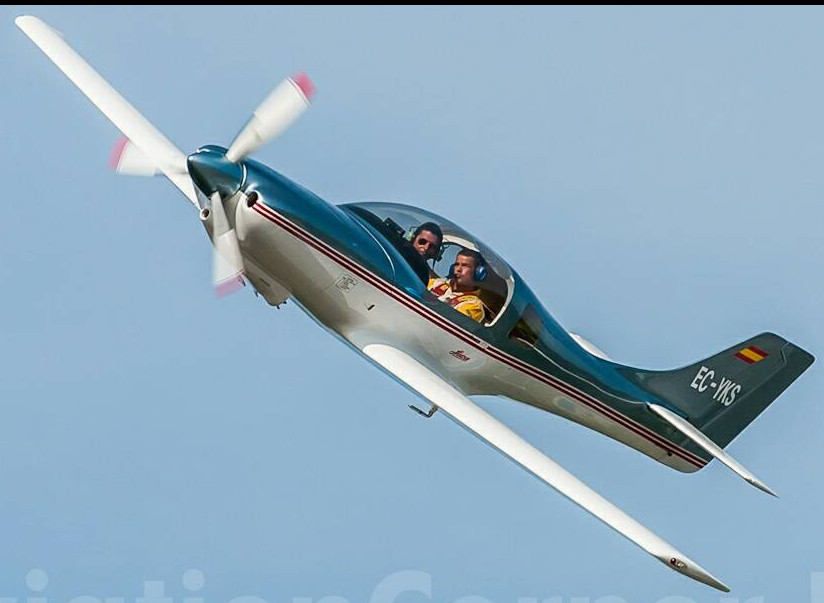 The GPS on the RHS looks like a KLN90B which is really curious.

The Spec and Review links point to this

so the listing is messed up.

But anyway can an EC-reg homebuilt be IFR certified and what does this mean for say a UK base? IIRC you still get only 6 months, in most places.

Maybe the author of the ad confused IFR certified with IFR equiped… Not sure where you can fly IFR in EU without mode S transponder.
Anyway, I woudn’t like to fly a Lancair without autopilot in clouds!


Not sure where you can fly IFR in EU without mode S transponder.

There are a lot of countries that don’t require mode S. Maybe not in central Europe, though.

I can’t tell if that Lancair has an autopilot.

I am sure it doesn’t have a slaved compass system.

Yes! Denmark, Norway, Finland, Sweden and Estonia for starters. There are more – I went through a lot of AIPs last year, but I didn’t keep notes and I don’t feel like doing it again. Anyway this will be moot after 2017 as EASA will impose mode S for all IFR.

“IFR equipped” vs “certified” is one of the catch lies on sites like that. Many will upgrade their airplane to IFR when in fact they are not.

Then again, quite some countries don’t actually certify their planes IFR.

As for ‘certified’, as a homebuilt it will only have a national approval. Outside of that it will be subject to the conditions dictated in that country.

For the UK that would be day/VFR and generally limited to 28 days per year.

Well, in the UK you don’t even need a radio

But it’s curious what the builder was thinking, putting in the KLN90. That unit went out of production c. 2000. So given the quoted construction date of 1990 that makes sense (I’ve seen homebuilts advertised with a year which was up to 20 years after the build commenced). The builder must have intended IFR operation (compliance with some unknown regulation – perhaps he read about US Experimentals which achieve IFR via having an IFR GPS?) to put in this small unit with its near-useless map. And it must have gone in pre-Garmin 430 because nobody would have put in a KLN90 after the 430 came out.

and generally limited to 28 days per year.

I think we did that here many times… isn’t the 28 days the max long term parking time for homebuilt N-regs in the UK (and maybe other places)? European reg homebuilts can stay for longer; typically 6 months.

to put in this small unit with its near-useless map

But it looks like this Lancair has got a FMS-MFD style GPS moving map (AVmap EKP IV) which can display IFR app charts as georeferenced charts – much better than a GNS 430 – regarding the sheer size of the map – though not certified ( and of course no LPV ).
European IFR charts abo by Seattle Avionics is 149 USD p.a.

I looked at the Avmap EKP 4 in detail years ago, when it was a current product. I didn’t buy it because the Italian manufacturer was totally non-communicative – something confirmed by their dealers here.

It was very good but I don’t think it ever did any georeferenced terminal charts. For Europe, these only ever existed as the AIP charts (non geo referenced) or Jepps (very pricey and AFAIK never ported to the unix-type OS used in this box).

IMHO the KLN90 was put in to pay lip service to IFR approval, in some way. Maybe the builder knew something?

Peter
Administrator
Shoreham EGKA, United Kingdom
48 Posts
This thread is locked. This means you can't add a response.
Sign in to add your message