I was expecting to see some progress at Air Venture. How much longer can this go on?

Diamond, Cessna, Piper, Robin etc are all offering diesel. Remos and most LSA have moved to the Rotax 912is.

They are all busy getting the jet done.

Cirrus has flown every existing Diesel engine in their prototypes, but it looks like some problems are not solved to this day: Vibration, Engine Start at Altitude, Weight … My bet was, for years, that the CD-300 (based on the Mercedes 3.0 litre, V6 twin turbo, which I actually drive …) developed by TCM would be the one selected, but since the last “news” from TCM about it is from 2014 … maybe we’ll never see it.

At the moment they HAVE to get the Jet done, that much is clear. Some sources in Cirrus say it will come by the end of August, but then they also need the production certification, becasue otherwise every single plane coming out of production has to be certified individually by the FAA …

There is no almost market in the USA for a diesel engined GA plane.

They have avgas just about everywhere. If a longer range was achieved, say 1500nm, that might be of interest to some but the US has so many runways that the main European driver for this (having to overfly e.g. Italy, or for flying around Greece, where there isn’t much avgas) is missing. And who wants to do 9+hr flights?

But a manufacturer isn’t going to say this openly because one day they may have to eat their words. It also never looks good if you have to say you are holding back on something because it isn’t going to make you money. It was the same with Cessna/Piper in the 1980s… they almost stopped production, citing product liability but in reality their sales had collapsed due to a massive drop in demand together with the 1960s and 1970s market overhang.

The driver behind diesel planes is the Chinese market, but that has “great future”, just like nuclear fusion.

I have never seen so many aircraft based around new tech engines whilst the market leader wins the Nall award for safety – for the chute. What nobody seems able to analysis is the chute only compensates for the terrible engine. Look deep into the accident reports and you’ll discover two facts:

Point 2 can only be fixed by producing an engine, that like Austro, requires 1x maintenance intervention per 1,000 hours.

Let it be clear – Cirrus engines do not provide appropriate safety by today’s standards and the chute is there to compensate.

I think most of the above points 1-5 are either of very limited relevance and possibly schemes for getting development grants (the electric ones), or have been abandoned (3 and 5).

There has always been a lot of engine development. Pop into any aviation museum. The one at Paris Le Bourget is full of engines. It is a field where many like to play. But in commercial terms a lot of it is bet hedging on markets which may appear (China) or activity which generates free column-inches in magazines and advert-funded pilot forums.

Saw this at Oshkosh (Continental CD 300) 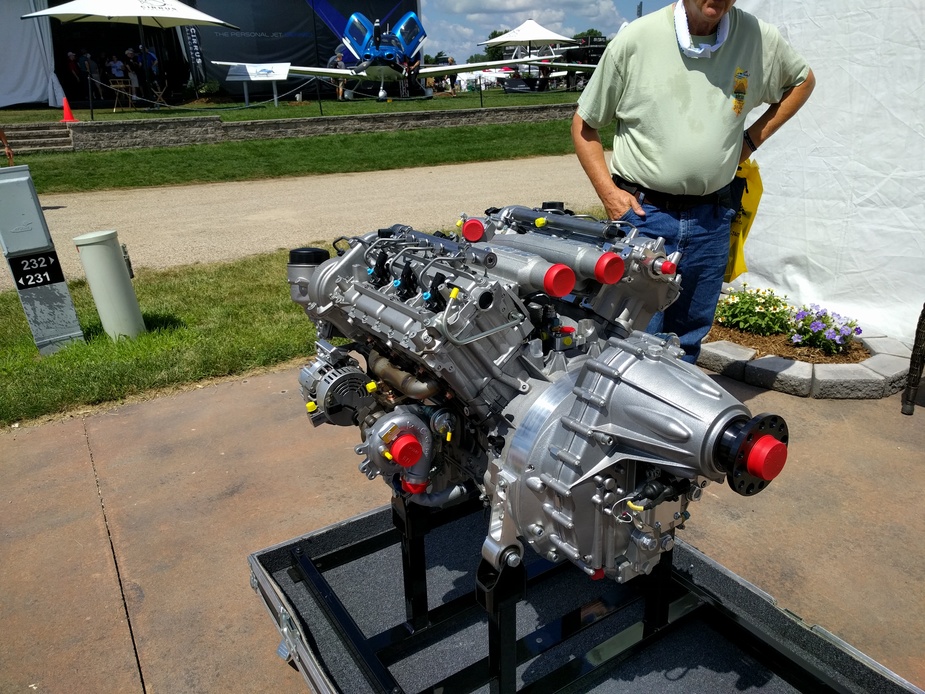 Would that fit into an SR22?


I think most of the above points 1-5 are either of very limited relevance and possibly schemes for getting development grants (the electric ones), or have been abandoned (3 and 5).

Electric is the future, there is no doubt about it. I was at the Sonex factory today (here in Oshkosh) and looked at their electric drive, among all the other stuff. They had an electric system already in 2007. They are still developing it, both software and hardware, just waiting until it gets more mainstream, and they can produce more units. They said they will design and build a separate aircraft for it, primarily as a test bed (it’s now installed in an ordinary Sonex, which is not the best airframe for an electric system). The main problem with electric is cost. The market needs to grow, so the production cost per unit gets lower, so people actually can afford it, and it can compete with traditional propulsion. There is also the battery-thing

But, a lot of that problem is also very much cost, not necessarily weight only. Battery price has seen a tremendous decline in price in the last couple of years, and once the cost of an electric powered aircraft with 1 1/2 h endurance gets down to the same cost as a traditional propulsion system, people will start buying them. It could be this year, it could be two years from now, but it will happen.

Saw two other electric systems at Oshkosh also, and there could be more, it’s just such a vast area here

I also took a look at the Evolution yesterday

It is really nice, the turbine powered. The piston powered looks but ugly. There are several Epics here, that come and go, but I have seen no Evolutions other than those on display. DA 42s seems to be all over the place on display for various vendors and schools and whatever. The most impressive (IMO) of all the “high end” end aircraft is the DA-62.

@Le_Sving
That’s the CD-300 that was show at Aero for three years now. It has also flown in a SR22 prototype (in Germany), and it is the replacement for the V-8 Diesel before (based on the Mercedes 4.0 litre car engine), which was (probably) too heavy.

Flyer59
54 Posts
This thread is locked. This means you can't add a response.
Sign in to add your message