Takeoffs and climbs are as deadly as approaches, descends and landings - What can we do about it?

After a very recent tragic accident during takeoff, involving the plane I used to fly the most, and which left two people dead, I talked a lot to fellow club members. One thing which became clear to me is that many people don’t realize that the takeoff and climb phases account for about as many fatal accidents as the approach, descend and landing phases of flight.

To raise awareness of this I added up the last couple of years of Nall reports published by the US AOPA. These provide a high level of detail and are only concerned with GA accidents. 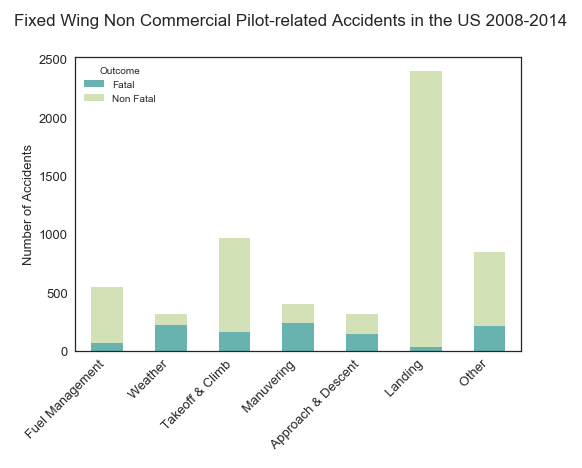 This figure shows the accumulated number of accidents in fixed wing aircraft, non commercial operations with a pilot-related cause in the years 2008 to 2014 in the US.

When we only look at the fatal accidents it becomes very clear that taking off is a very critical phase of flight. While fewer total accidents happen during takeoff the ones that happen are far more deadly. 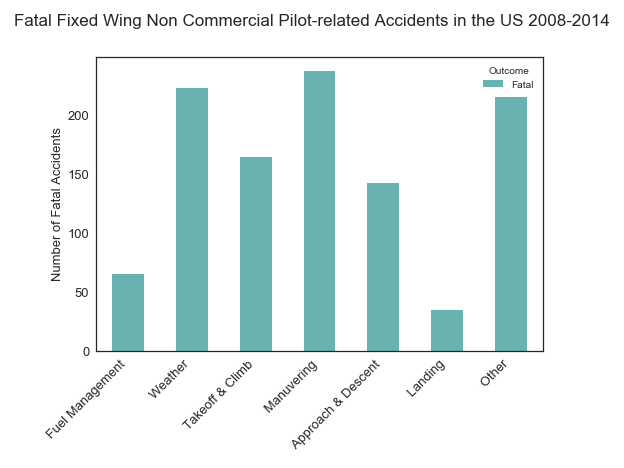 Looking at the 26th Nall report, which analyses the year 2014, we have these causes reported for the takeoff and climb accidents: 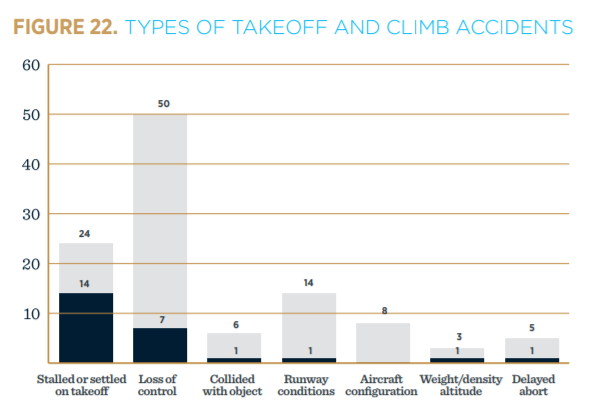 So now the big question for all of us arises: What can I do to avoid these dangers, what can we all do?

I think one major issue is raising awareness. Making it clear that taking off is as critical as landing and we should pay the same amount of focus and attention to it.

Another thought going through my mind is that we are quite willing to abandon an approach, just go around and give it another try. While I’ve done countless go arounds I only aborted one takeoff. Maybe we should be more willing to abort a takeoff as well. At most fields there is ample runway length for slowing the plane even at or after rotation speed. If something isn’t quite right abort it, check everything again and give it another try.

Speaking of rotation speeds, I know there are many people who aren’t fans of using those in small GA planes, but maybe a very premature rotation or a delayed one would be immediate cause for alarm and an aborted takeoff. Combining this with an estimation of the ground roll distance even on long runways and looking for a prominent taxiway or landmark might also give us a better indication of aircraft performance and tell us when something is just not right.

What do you think?

Source:
All AOPA Nall reports are available at:
https://www.aopa.org/training-and-safety/air-safety-institute/accident-analysis/joseph-t-nall-report

Reading the statistics you posted, a stall seems to be the most common reason for an accident during take off. I wonder why that is. Are EFATOs subsumed here?

Personally I always feel uncomfortable when take off is performed at relatively low speeds, such a Vx or Vy. These speeds give little to no reserves in case of gusts or a sudden loss of engine power. Also climbing with a higher speed is much more comfortable due to less nose-up attitude.

I was also wondering the same, but these statistics due not include those events.
This quote from the report hopefully makes it clearer: "After excluding accidents due to mechanical failures or improper maintenance, accidents whose causes have not been determined, and the handful due to circumstances beyond the pilot’s control, all that remain are considered pilot-related. "
There is a separate part only dealing with mechanical failures.

And yes climb speed is definitely a trade-off between margin to stall and climb performance. For the C172 at a v_y of 75kts you would have a margin to stall of at least 23kts (Power off, 30deg bank, any CG, max weight) but of course with a distraction and sudden changes in wind this might be less than one would assume.

In my personal experience perfectly smooth air can actually be a bigger danger when it comes to stalls combined with distractions. While rough air will force you to keep on top of the speed all the time I once got distracted by traffic and radio comms on a very smooth day, obviously neglecting my instruments too much and ended up not quite at stall speed but far slower than I wanted to be.

There tends to be night take off, and IMC take off accidents due to the pilot confusing acceleration with a climb – the somatogravic illusion. It would be interesting to know how many of these might fall into this category. 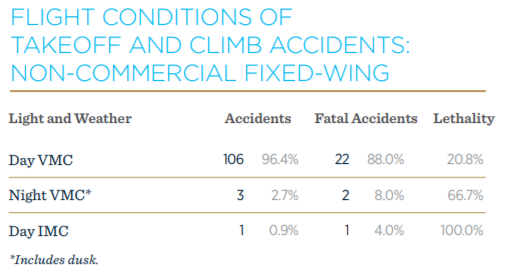 Of the 22 fatal accidents 88% happened in day VMC, 2 of the 3 night VMC accidents were fatal and the 1 day IMC accident was as well.

For 2013 it looks similar, 96% of all takeoff and climb accidents happened in day VMC. And 83.3% of the fatal ones, which means there were 1 fatal night VMC and 1 fatal night IMC accident.


Personally I always feel uncomfortable when take off is performed at relatively low speeds, such a Vx or Vy.

It seems to me that Vx is really quit low on most of types to cause a loss of control in a sudden gusts, large control inputs or bank angles:
You need more than Vx to maintain controlled flight in the in turbulence/sink caused by the obstacle you are trying to clear and besides the angle difference between Vx and Vy in new types is very negligible compared to many other factors that you should not even takeoff in the first place.

I think we tend overweight the loss of control due to that VMC-IMC transition, most of take off accidents are just about keeping flying it (irrespective of conditions) or while on the ground, on the latter the difficult bit on takeoffs is to have the discipline to call it off well before if you are not happy with what you feel rather than hanging optimistic (e.g. the 70/50 rule)

I always tried to save my takeoffs and make them work irrespective of their feeling, I did this for a while until the day I realised that I just did a very marginal takoff with parking breaks partially half-way (for a while I did blame it on new type, the previous guy, the school SOP but all of it goes to that handwritten checklist and not setting a proper constant 1200 rpm on taxi

), while I managed to clear the hedge with an airspeed that was stuck at 55kts I was really lucky to find out my mistake before coming back to land, it could have been worse landing with breaks partially on….

The obvious lesson remain the same: even if you get away with that marginal takeoff, you still have to do the associated landing

Some random thoughts in no particular order:

- approach to stall in climbing turn, with takeoff flap, is a SEP Class Rating Test item but it is not always well flown / understood

- EFATOs need briefing and regular practice, including the need to avoid the turnback (cue much debate) unless you are very highly trained and practiced in them.

This is pretty well established. On takeoff you are slower than landing. Problems also require immediate action to avoid stall.

In PPL training one tends to climb at Vx or Vy but once flying an “IFR tourer” these speeds are much too low for engine (CHT) management. Accordingly, the better procedure is to climb at Vx or Vy until obstacle clearance is assured (which is most of Europe is no time at all) and then trim to something part-way between Vy and normal cruise. For the TB20 it is about 110-120kt.

You also get a better view forward; desirable in the proximity to the airfield which is where most mid-airs take place. Spending money on TAS/TCAS is only a partial solution because much traffic is nontransponding, and while you can mostly avoid that crowd by flying “high” you cannot avoid them when departing or arriving.

Probably another reason for takeoff accidents is that any overweight condition is present there, whereas it will be very unlikely to exist on landing. And lots of people fly overweight as normal practice

You would need considerable vertical excess thrust to climb at Vs!

RobertL18C
Enstone (EGTN), Oxford (EGTK)
20 Posts
This thread is locked. This means you can't add a response.
Sign in to add your message