The day I almost died, or stupid pilot tricks.

It’s been almost a year, my Aerostar is now sold and this is behind me, so I thought I’d share probably my closest call. A reminder that it’s very easy to get distracted.

I was flying from LA to NY. I’d stopped for fuel in Pueblo, CO and my poor wife-to-be had suffered the cold at FL190 on the way in because I couldn’t remember how to use the goddamn Janitrol (as I never use it in CA, and it also scares me). It was an approach to almost minimums into Pueblo, and the ride had been pretty rough over the mountains, so already mood was heightened. Weather on our continued trip to NY was also forecast to be even worse, so maybe I was distracted a little by that as well. Fairly new IR pilot and all.

Had just gotten off the phone with Aerostar Owners Association’s Ken Bacon on the full rundown on how to operate the heater. Ken told me how to best vent the system after not having used it for for more than a year and he was right – it needed to vent out as it smelled a bit of oil. So I started the heater, taxied to the runup, got my clearance, programmed everything as I kept venting. Then I get release, taxi for takeoff with the door closed, but not latched. I had somehow not double checked when I did checklist, like a total moron. I did the next step, inflate the door seal (which would turn out to be both my undoing and a blessing) but somehow must have skipped the latching part.

You can figure out the rest.

On rotation my gf says “Adam, door isn’t closed”. It’s semi shut, but not latched. I try to close it, but the seal prevents me from doing so. So stupidly – and not remembering that this was huge sticking point during ground training with Don Smith – I deflate the seal to try to shut it and – wham! – there goes the door. Flings up, cracks the support, breaks the glass. I declare an emergency and turn around, but the sound and the cold shocks me. During my go around I perform pretty bad. The noise, the cold and my fear that door is going to rip off, get into prop, or hit tail, or land on some poor guy on the ground made me reduce power more than I should have. Twice I feel the buffet of the wing and stall onset (no stall warners on Aerostars). On the base to final turn I do the dangerous trick of pushing rudder to tighten turn resulting in a severely skidding turn, slow speed. So stupid. I get her back on the ground, but do a pretty poor job of it – only extending flaps just before touchdown. I had forgotten that, too. Thankfully, rwy is long at Pueblo.

I was furious at myself for not flying the plane as I should have done. I got slow twice, I forgot flaps, I forced her around with too much rudder low to the ground. All classic mistakes that could have ended very badly. The cold and the noise really distracted me, but also the fear of the door ripping off. My dear wife-to-be stayed calm during all of this, thankfully. But I was extra mad at myself for putting her in danger and I was skittish for many days after that, waking up in the middle of the night with cold sweats, having trouble sleeping etc.

Anyway, all ended well, but just in case this should happen to anyone else flying a pressurized Aerostar – don’t deflate the seal! It’s what kept the door in place, jammed. And don’t try to close it in the air either! If I hadn’t done that and just returned, I would have been OK.

Fly safe out there!

PS. Door had mostly internal damage on locking mechanisms and on window. Thank god the hinges held the door in place. I replaced hinges, window and most of the door interior. A local A&P at Pueblo did a great job getting her fixed up with minimal downtime. Here’s a pic after repair. 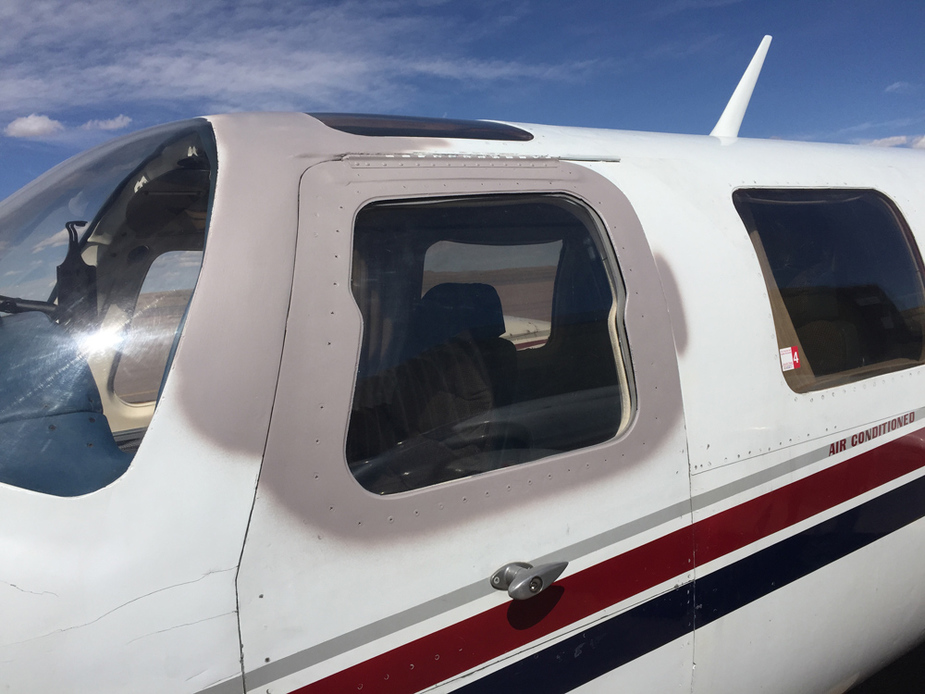 Thanks for sharing. I think we’ve all had those moments where we felt like the world’s lousiest pilot. I am glad to hear that everything worked out in the end. There are slow ways to learn stuff, i.e. books and studies, then there are the fast(and sometimes dangerous) ways to learn. Now you will probably never forget that again.

Adam, that sounds like a close one. Rule # 1 and most important of all: Forget the f&/:;ing door until you are at a safe altitude!!

Here in my area, many years ago, a Lufthansa captain got killed when he tried to close the door of his Baron at low altitude.

The most stupid thing (until now …) i have done was to pull the mixer instead of carb heat in the pattern. 1/2 liter of Adrenaline :-)

I took off with mixture in ICO. Worked fine during engine run up and all the way up to 100 ft airborne after departure. Luckily I was realised my mistake straight away and selected tank as soon as the roughness came and it came alive again. Won’t do that again! Felt like a complete idiot…

Great story Adam. Thanks for posting it.

Here at Shoreham, many years ago, a TB10 pilot took off with the luggage door open, got distracted and crashed it and killed himself.

Adam thank you for posting. Do you still have the Section 3 Emergency from the AFM for door open in flight? Getting these learnt with flashcards helps ensure the brain reserve capacity will not send you down the wrong path, easy to say from an arm chair at home, though.

Adam, great story. It’s amazing to me how really simple things can become big things when you are distracted.

Once when transitioning into a new type, I was descending on a long extended base leg entry to land, with the throttle relatively closed. As I neared my target altitude, I started easing in throttle to arrest the descent rate, and became alarmed when I kept descending. Eventually I ended up 200 feet low and going 20 knots over cruise speed on base leg, while having become completely disoriented from flying the plane while looking for traffic…

The main issue was that I was mentally flying another type aircraft that ‘automatically’ pitches up and slows down with added power, instead of the new type that has weaker static (speed) stability and would just accelerate with more throttle. There was also the issue that the new type has a constant pitch prop so the noise didn’t change pitch with throttle opening. I felt completely stupid but the odd thing was that when I finally closed the throttle and pitched up, I ended up at exactly the correct altitude and speed, dropped the flaps, turned final and landed. Fools luck

This is a checklist problem – not performing a pre-taxi seat-belt and door check. The rest is surviving that error.

This is a checklist problem – not performing a pre-taxi seat-belt and door check. The rest is surviving that error.

Well, you very often taxi Aerostars with door open, so that’s why it’s on the before takeoff checklist. It’s not a pre-taxi item. In any case, I should have taken the hint when I got to the Inflate Doorseal, as that is the step after the door latching…

AdamFrisch
KEMT
17 Posts
This thread is locked. This means you can't add a response.
Sign in to add your message

Why has the SR22 been such a success?
Certified vs Non certified IFR avionics (VFR/IFR Robin) - whats the difference?
What happens with an ILS (or LPV) glideslope below the DH?
Little Tricks