Lots of talk about expensive UL/LSA. But why are they so expensive? Why does a UL/LSA cost €150-200k today?

The designer of the Merlin single seat (among other designs) has some insight into this: 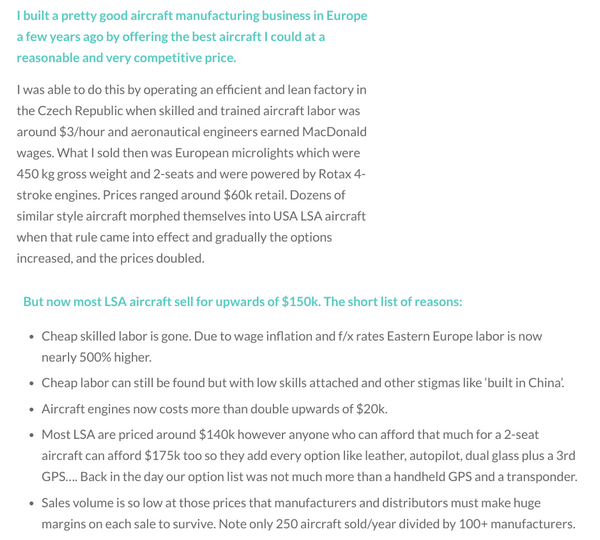 So it’s a combination. No cheap skilled labor to be found. The other is once the price get over a certain point, €100k or so by the looks of it, then the ones who can afford it also can afford €200k, or more easily. The manufacturers will then target the highest price possible to get the margin up, because they sell only a handful per year. Very few people can afford €100k or more for an aircraft.

It’s an evil spiral, and seemingly impossible to stop. The explosion of ULs 15-20 years ago is definitely over, and it doesn’t look like it will come back ever again. The only thing left now is homebuilt aircraft (UL or experimental). It’s the only thing ordinary people can afford. Old certified planes also looks like good value for the money, but these aircraft are limited in numbers.

@LeSving the math is simple: airframe – 15-20K, engine (Rotax 912S) – 25K (915 is around 45K), avionics – 50K, paintjob – 10K. That way a 912-based a/c costs 20K+20K+50K+10K=100K plus extras, plus development costs (including tooling), plus extras, plus margin…
Even if you use the cheaper avionics, likely that the customer will add more expensive ones as the costs quite high anyway, so it will be like +5% or +15%…
If particular model is sold in numbers then you can negotiate with Rotax and Garmin/Dynon, spread the dev/tooling costs across more a/c.


The only thing left now is homebuilt aircraft (UL or experimental). It’s the only thing ordinary people can afford. Old certified planes also looks like good value for the money, but these aircraft are limited in numbers.

With additional factor of there being more used certified planes available, that’s why Euro-style LSAs have never sold well in the US. When compared to an RV costing considerably less they have very poor overall performance, and they cost four times as much as my used certified plane that can carry more and otherwise has broadly comparable capability.

I flew with a friend in his RV-8 today – the thing is amazing. We climbed out in a conventional circuit to stay behind downwind traffic and ended up at 2400 ft height on downwind. Then with power pulled way back the thing just keeps going up and level at 5500 ft was doing 130 kts with the engine seemingly just above idle, 2000 rpm and closed throttle, nowhere near cruise power. After doing a whole flight of acro, two landings etc we’d burned 5.5 gallons total – direct cost for the flight was $25.

How could a $150K LSA compete with that, and sell any planes at all? The answer for the limited US sales they do get is flying legally without a medical – the reason for my coming along on the flight today was to be legal PIC while the RV owner works out his medical certification issues. Looking forward with this in mind, I note that a 1000 hour TT Tecnam 2002, a type I’ve flown and liked, can now be bought for under $60K. Maybe someday I’ll need to take advantage of the LSA market niche, but I’m happy to let somebody else pay the depreciation.

50k avionics in a UL? but I agree on the rest of the maths you are not getting away with less than 90k new no matter how you play with, what you get is a cheaper maintenance and running cost

A factory built skyranger is 50K.

Good price that and a very good aircraft.

What is the OEM cost of avionics which list at 50k retail? I don’t think anybody has ever gone on record with the trade discounts, so we have to guess.

In general, a manufacturer needs to get the material cost below 50% of the selling price (and I mean the selling price to their dealers, which on normal SEPs is some 15% below the retail list price). That is a rough rule for a business which is actually making something real but not in big volumes and not really cheap (what I’ve been doing since 1978). In aircraft you have quite a lot of labour (low volume, etc, meaning few options for tooling-up) so one can bend that a bit but to sell a plane retail for 150k you need to get the materials down to 60k.

Anything else is basically doing a Vern Raburn who lived in a dream world of selling tens of thousands, and based the margins on fantastic purchasing powers at that volume, which was never achieved by anybody.

No cheap skilled work is good news, eastern europe is growing fast
Low sales number is bad . Strange to say but a lot of people don’t give a damn about flying . I used to think it was because it’s expensive , but noticing the numbers of boats in the Venice area , if 1\10 of the money spend in them would be use to buy aircraft the sky will be packed .
Here in Italy hangars are full of cheaps flexiwing getting dust and very few people gettin older fly with something that cost 60\70 K euro if 10 years old , 150 K the rare new.

There still are a few of that class of aircraft available factory new. Basically 1st generation UL, tube and sail (or garden chair variety

) The ones who are left are excellent designs, worth a study in simplicity, function and smart solutions. 20-30 years ago, these were what people wanted, but not long after came the 2nd generation. Sleek carbon composite, vastly better performance, cruising at 110-120 kt, and they didn’t cost a whole lot more. Then, as described above, they morphed into US LSA, and prices doubled. They doubled also for the original European UL versions, as the standard of finish and interior, instruments etc increased.

The “standard” is set today. It is set by the generation that started with UL. They started with tube and sail, 2 stroke engines, super simple “avionics” etc. Anyone could afford such a 1st generation aircraft at 5-10k. Being tired of landing in the trees, the 2 stroke engine was replaced with a purpose made 4 stroke engine, effectively making the cost of the aircraft increase to 10-20k. Then nicer instruments, better overall quality on all things, and the price tag doubled to 20-40 k. Then came the “real aircraft”, carbon composite, sleek aerodynamics, real modern stuff in structure, aerodynamics and looks, faster than a C-172. The price increased again: 40-70k. That was still within reach, absolutely no problem for the 1st generation of pilots who were now in their “prime” (50+, lots of money, grown up kids etc). They talked warmly about these new aircraft. Finally aircraft that by looks, performance and reliability/quality wiped off C-172s and Cherokees (at least as 2 person VFR traveler is concerned). Back in 2000-2005 you could get a quick built carbon composite kit with everything needed for 30-40k. It took 100-200 hours to mount it together, easily done during the winter months.

The “standard” is set. Sleek looking carbon composite, laminar aerodynamics (fancy hi-tech wings), Rotax 912, glass cockpit, BRS, preferably also CS prop, retracts and a 914. Aircraft that makes a C-172 appear like a steam engine from the long gone past. Truly amazing aircraft. They can take off and land from anywhere, 200m grass strip is more than enough. Cruise at 140-150 kts at 8k+ feet, and climb up there at 1500-2000 feet/minute. This is the “standard” set by the first generation of UL pilots. They could afford it (15-20 years ago), and they could tell funny tales about how crazy and nutty things were with 2 strokes engines, tube and sail, cruising at 60 kts waiting for the engine to seize up

Well, the 2nd generation UL aircraft cost today from 100k and up, typically 150k and up. With MTOW increased to 600 kg, making 2 on board a legal flight

the price will increases still. Amazing aircraft, but utterly useless because of the price tag.

They will work in a club setting, but renting out non certified aircraft (with non certified maintenance) opens up a whole new can of worms that eventually will have to be firmly dealt with (by the authorities). But that’s another discussion.

The point I’m trying to make is the 1st generation of UL pilots (and manufacturers) have got what they wanted. Modern aircraft (carbon composite, aerodynamics, avionics, engines) that completely makes the C-172 class aircraft obsolete, at least as a 2 person VFR aircraft, which satisfies 99.5 % of Europe’s recreational GA pilots. The down side is no one can afford them anymore. They are still a whole lot cheaper than a factory new 4 place certified SEP, but no one can afford that either. There is no way to “fix” this. it’s a positive feedback mechanism where the upper limit is decided by manufacturing the least amount of aircraft with the largest amount of profit per aircraft. When the price of an aircraft goes above, say 100-150k, the market shrinks dramatically and becomes one where they rather go for the very best, price isn’t an issue anymore. Therefore we get such oxymoron aircraft as the VL3 and Blackwing. Spectacular performance (speed vise), but utterly irrelevant pieces of overpriced junk all things considered. A home-made RV-4 at 1/4 of the cost (newly built by a sober, not extravagant person) will still fly circles around them, while doing aerobatics, and IFR.

The modern European UL. Planes that could make flying affordable, while at the same time jump the standard to modern engines, modern aerodynamics, modern avionics has for all intents and purposes made itself irrelevant. They cost too much. It’s a ridiculous development. An ordinary pilot wanting a 100-120 kt VFR easy tourer is today better off taking PPL and buying an old EASA certified SEP. There are still Skyranger and similar planes available, but they cannot compete with a C-172 class in anything but operating cost and short field performance. Also, a Skyranger is for many the symbol of old generation UL; dangerous, slow, windy, garden chair, un-sexy (which is equally nutty, but still a “reality” in people’s minds. Made into a “reality” mostly by the 1st generation of UL pilots themselves). 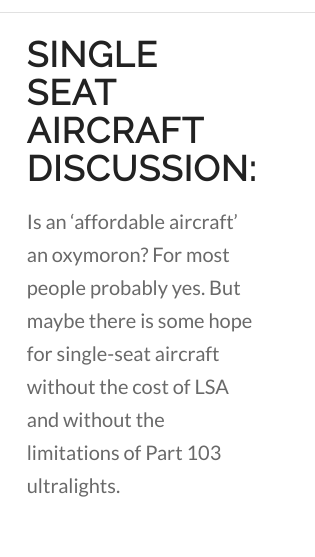 I think the “homemade RV4” versus Blackwing comparison is irrelevant. People who spend 150k on a Blackwing either don’t have enough spare time to spend 10 years on building something in a garage, or value it at a lot more than 150k.


I think the “homemade RV4” versus Blackwing comparison is irrelevant. People who spend 150k on a Blackwing either don’t have enough spare time to spend 10 years on building something in a garage, or value it at a lot more than 150k.

That IS the whole point isn’t it? If you have 150k and upward to spend indiscriminately, which you better have if you are thinking about something like a Blackwing. Well – all your aviation problems are solved. The thing is, very very few people are in such a situation. Blackwing is selling only a small handful of planes, and they want to sell them as expensive as possible. They can do that because their customers don’t really care, money isn’t an issue.

What are you going to do if you don’t have 150k to spend indiscriminately on aviation toys? That is the question. Part of the answer is that a whole lot more RVs have been built by individual in their garages, than Blackwings being sold. About a factor 1000.

LeSving
ENVA ENOP ENMO, Norway
41 Posts
This thread is locked. This means you can't add a response.
Sign in to add your message

Why is General Aviation declining?
UL/LSA Annex II Advice
Interesting article on LSAs vs Certified and maybe a bridge in between?
LSA / UL accident rates, and French microlight license