Transferring a factory built aircraft from LAA permit to CofA

I still only see about 9000 fixed wing GA planes among all the balloons, microlights and hang gliders.

I think Silvaire is correct. 10k must be the total projected number that would/may eventually end up in a national register instead of having a ICAO CofA. Makes sense.

Although the term is used by people in different ways, I do find it amusing to see the word ‘vintage’ applied to aircraft made in the 1970s!

Well. Most people living today are born after 1970

Thanks and there I was thinking that most countries now had an aging population.
I can’t disagree about technology etc. Can anyone remember Freddie Laker? and whilst I remember having lunch with a top guy from IBM research department when he told me about the introduction of the first PC and what he thought it would be capable of, (I admit I thought he was off his mind) I now note that if you were born sometime after the 70’s you might ask the question “what’s a PC?” So le Sving for those who were born in the 70’s welcome to the stone age, at least we can all say we were there when it all started.

You’re probably the only one who thinks that way, at the same time building two designs with aerodynamics out of the 1930s and materials out of the 1940s. So your point being?


Remember they all once were fully ICAO CofA, and it’s not awfully long ago since EASA said “screw all these planes”.

EASA never said such a thing. At least stick to the truth.

Don’t get personal, guys. Play the ball, not the man, as the saying goes. The CofA / Permit / whatever picture is pretty complex, and there are all sorts of vested interests, in each of the different directions.

So your point being?

A fun fact (an attempt at least) with smilies around

I spent a lot of time as a kid in the 70s visiting airports with my dad. At that time the US ramp rats were immediate post war stuff and economically minded people flew $1500 Cubs and Aeronca Champs. A guy we knew had a C140 and he was restoring it (outside) while still flying it – the seats were reinstalled when he wanted to fly. Paint half stripped and N-numbers taped on. That was a thrifty year old plane at the time.

The guy who ran our local airport had a collection of (mostly) antique planes, mostly pre-war with some unusual stuff like a Stearman Hammond and another one built immediately post-war the name of which I can’t immediately remember (edit: I remembered – it was an Emigh Trojan) that had external wing ribs. People flew stuff like PT-22s and Stinson 108s as their regular planes because Kinner and Franklin engine parts were available. Of course Cessnas and Pipers were everywhere, and when the Mooney 201 came out it created quite a fuss – something like the Pipistrel Panthera except they sold lots of them. There was also a lot of neat older stuff around and the homebuilt scene was going crazy with Vari-Ezes etc being finished weekly. One day a guy with an Aerosport Rail took off and hit a bridge on the upwind – apparently two snowmobile engines weren’t much better than one. RVs were around but they hadn’t really caught on yet. People were a bit scared of building aluminum homebuilts, too much skill and equipment needed. Over the next twenty years, that got resolved with the availability of kits and the composite designs faded in popularity a bit.

So to summarize, in the 70s the US scene was mostly tube-and-rag if you were on a budget. New stuff sold well but if you were on a budget you bought something ‘used’ and it was often 30 years old. The main difference was that radios and avionics, while interesting to many, were not an essential factor – see 1973 AOPA Pilot article below. Also, the cheap 30 year old used planes then had a bit less power and performance than cheap 30 year old used planes today. 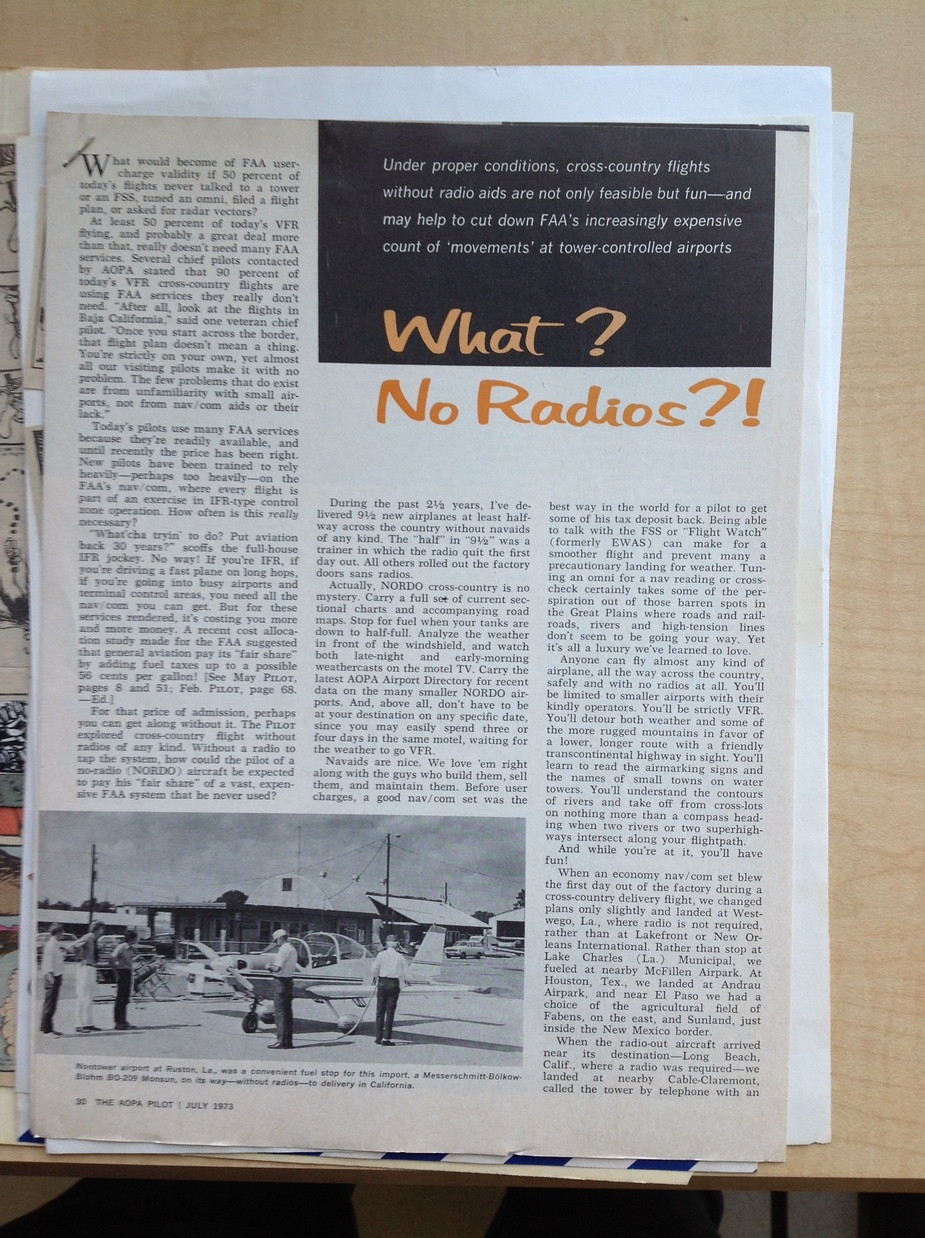 Silvaire
USA
28 Posts
This thread is locked. This means you can't add a response.
Sign in to add your message

EASA Permit to Fly - transferring from one register to another
Rules/limitations/gotchas on the re-sale of a homebuilt?
Is GA "retail" or "B2B", from the consumer rights point of view?
LAA Chief Exec